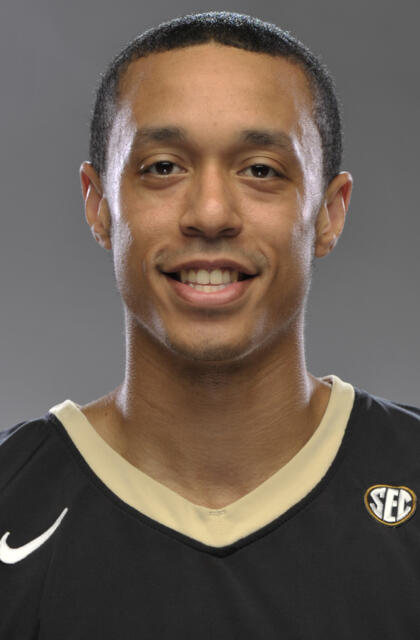 2011-12 (Junior):
Played in 35 games and averaged 19.9 points per game, which the led the SEC for the second consecutive season – first time since LSU’s Ronnie Henderson did it in 1995-96…Tied an SEC single-season record for threes made in a season with 134…Paced the nation in three’s made per game with 3.9 per contest, and made three or more threes in a game in 30 of 35 games played; made six or more in three games…Scored in double-digits in 69 consecutive games to end his career…Was a consensus First Team All-SEC member by the league’s coaches and media, and was named a third-team All-American by the Associated Press…Scored 20 or more points in 17 contests in his junior season…Shot 43.9% from beyond-the-arc for the season, and scored 696 points, three points shy of Vanderbilt’s all-time single-season scoring record…Departs Vanderbilt as the school’s 10th all-time leading scorer with 1,660 points, and the school’s second-most prolific shooter from three with 306 career makes…Also departs the school with the third-best three-point field goal percentage in Commodore basketball history (.438).

2010-11 (Sophomore):
Became Vanderbilt[apos]s all-time leading sophomore scorer with 624 points and a 19.5 ppg average…Played in 32 games and averaged 19.5 points and 3.0 rebounds per game…Led the league in scoring in all games (19.5) and in 3-point field goals made per game (3.1) and finished second in free throw percentage (.894)… Also led the SEC in scoring in league games only (20.8) and threes made (3.1) in SEC games only; finished second in free-throw percentage (.908)…Made 100 three pointers as a sophomore, which is the fourth-best single season total in Vanderbilt history…His 89.4% free throw percentage is the third-best single-season total in Commodore history…Tallied double figures in every game played this season…Scored 20 or more points in 19 games this season and 21 in his career; made at least 5 threes in seven games; led the SEC in 20-point games…Scored 20 or more in 10 of 16 league games in 2010-11…Scored game-high 22 points vs. Florida (3/5)…Tallied game-high 22 points at Auburn (2/19)…Held scoreless at Georgia (2/16) in first half, but scored 21 points in the final 13:16 of regulation. Was 5-10 from three…Pumped in a career-high 32 points against Kentucky (2/12); made a career-high 11 field goals and tied for a career-high with six made threes…Claimed his second SEC Player of the Week award after averaging 26.0 points, 2.5 rebounds, and 2.5 assists in the team[apos]s two wins over Alabama and Kentucky…Led the team with 20 points vs. Alabama; 22 points at Florida…Converted 10-of-10 free throws against Arkansas, led team with 24 points…Scored 21 points and was 9-for-9 from the free throw line against Mississippi State (1/27)…Went for 20 points on 7-of-10 shooting against Ole Miss (1/19); was also 4-of-5 from beyond the arc…Scored team-high 21 points at Tennessee (1/15)…Tied for team-high with 18 points against Georgia…Returned to starting lineup at South Carolina after suffering concussion before Davidson game; scored game-high 27 points (also tied a then Vanderbilt season-high)…Led team with 23 points at Missouri (12/8), 22 points against Grambling (11/24), 21 vs. App. State (11/27), and 21 vs. WKU (12/1)…Won SEC Player of the Week for his play at the Honda Puerto Rico Tip-Off… Averaged 21.7 points and 3.0 rebounds in three games, and led the Commodores in scoring in each of the three games during the tournament. Jenkins finished the tournament having made 25-of-28 free throws (.893) and was selected to the Puerto Rico Tip-Off All-Tournament team…Scored then career-high 27 points vs. WVU (11/19); also had a career-high in FG attempts (19), 3-point FG attempts (11), and was a perfect 10-for-10 from the FT line (both career highs).

Freshman (2009-10):
Played in 31 games and made seven starts, and averaged 11.0 points per game…One of the nation[apos]s best high school shooters entering college, he did not disappoint in his freshman season…his 48.3% from three ranks as the third-best single-season three-point percentage in the program[apos]s history, and ranks as the 11th-best single season in SEC history…Also ranks as the third-best career percentage in SEC history with 100 to 199 career three-point attempts…Scored 340 points in his freshman season, the seventh-best single-season total in Vanderbilt history…Tied for 10th for best single-season scoring average…Tallied double figures in 20 of 31 games played… Jenkins won three SEC Freshman of the Week honors in 2009-10 – he averaged 13.5 points, 1.5 rebounds, and 1.5 assists in Vanderbilt[apos]s two wins Feb. 22-March 1, was honored for his performances against Middle Tennessee State and Florida, January 4-11, when he averaged 13.0 points and 4.0 rebounds in two Commodore wins, and also for his performances against Manhattan and Southern Miss December 27-January 4, when he averaged 17.5 points, 3.5 rebounds…Scored a career-best 25 points against Georgia in the quarterfinals of the SEC Tournament (3/12); made seven field goals, also a career-high, in the game…Knocked down six threes in a Commodore win at Florida (3/2)…Also made six threes against Southern Miss (1/2)…Had at least three three-pointers in 14 games…made four or more in five games…Shot 80% from the free throw line on the season (48-60)…Grabbed a career-high six rebounds against Manhattan (12/30)…Dished out a career-high three assists against Manhattan and Southern Miss…Had two blocks at South Carolina (1/16).

Station Camp High School:
Was a two-time TSSAA Class AA Mr. Basketball selection, and was the Gatorade Tennessee High School Player of the Year in 2008-09…Named The Tennessean Boys Player of the Year in 2008 and 2009…Was a PARADE All-American and Reebok All-American in his senior year…Jenkins[apos] scoring average of 42.3 points per game was second on the state[apos]s single-season list behind Ronnie Schmitz, who averaged 44.2 points at Ridgeway High School in 1988-89…He shot over 60 percent from the field and nearly 50 percent from 3-point land in his senior season….Ended his high school career with 3,192 points, with 1,228 of those coming in his senior season…Scored 60 points against Gallatin High School on February 16, 2009… Participated in two prestigious postseason all-star games in the spring of 2009 – the Capital Classic and Reebok All-American games in Washington D.C…Led all players in the Capital Classic with 27 points…Was the leading scorer at the 16th Annual NBA Players Association Top 100 Camp in Charlottesville, Va.,in the summer of 2008, and saw his stock rise with his outstanding shooting performances against some of the nation[apos]s top college prospects; he averaged 17.8 points per game…Also was a Nike Chosen Ones selection after his junior season, an honor that goes to the nation[apos]s top 50 players, regardless of class…Led the state of Tennessee in scoring as a junior, averaging 30.9 points per game.