Roots is a series that profiles Vanderbilt student-athletes and coaches, and reflects back on their lives, forming a roadmap that guides readers through the early years of their lives to where they are today.

Look over the course of your working career. Have you ever asked yourself how your life may have differed had you taken the other fork in the road or made a decision a little sooner … or a little later? It is often those decisions and/or those extra days it takes to make a decision that steer the course for where people end up in their careers. For Vanderbilt Swimming and Diving Coach Jeremy Organ, the beginning of his current career path can be traced back to a phone call he received just hours before accepting a job as a carpenter.

Organ had recently graduated from the University of North Dakota and had returned home to Cranbrook, British Columbia, an outdoorsman’s paradise with a plethora of ski slopes, golf courses and fishing holes to keep tourists busy all seasons of the year. 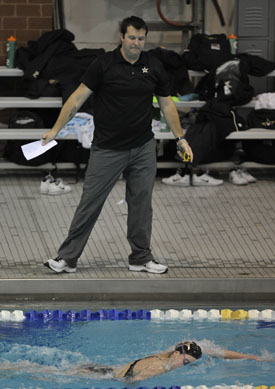 Back in Cranbrook, he trained for the Olympic trials, but soon realized his best days competing in the pool were behind him. Finally he settled on a career path: carpentry. But just before he could begin, he received the phone call that would eventually lead him to a career coaching swimming. “I was actually just about to start as a practitioner for carpentry and that day I received the call,” Organ recalled.

On the other end of the phone was Mike Stromberg, who Organ swam for at North Dakota, with an offer to join his staff as a graduate assistant.

Organ accepted the offer and headed back to North Dakota. While at North Dakota, Organ also coached a club team in Grand Forks. He had officially began his coaching career, one that eventually would guide him to Vanderbilt.

Before arriving on Vanderbilt’s campus, Organ’s coaching trail took him from North Dakota to Pensacola, Fla., where he coached a club team for two years before accepting a job as a senior assistant with the Nashville Aquatic Club in 2002. It was from there that Organ was hired by Vanderbilt in 2005 to help resurrect the swim program that had been dormant since 1992.

Organ’s unconventional route to becoming Vanderbilt’s head coach was fitting given his unusually late introduction to the sport.

Growing up in Canada, swimming was not of great interest to Organ. Instead, his sport of choice, like many Canadians, was played on top of a frozen body of water, not in it. Organ’s hometown of Cranbrook has approximately 25,000 residents, but it packs a large punch on the ice. Eleven times in a recent 13-year span, at least one member of the team that won the Stanley Cup was from Cranbrook.

Organ, who played forward and center, grew up with many of those players, including Scott Niedermayer, John Klemm and Scott’s younger brother, Rob Niedermayer.

“Plus or minus two years around me, there were a number of guys that made it to the NHL,” Organ said. “Scott Niedermayer grew up less than half a mile from me and we played together. We used to dress his brother, Rob, up in goalie pads and shoot at a goal in the garage.”

At a young age Organ traveled throughout Canada and into the U.S. with his junior hockey team, but the older he got, the closer he came to having to make a critical decision almost any hockey player in Canada or in the U.S. must make early in their lives. In order to continue their skill development against the best competition, junior hockey players must decide whether to take the next step in their development by moving away from their families to play for larger clubs and live with a host family in a different town. For Organ, this decision had to be made after he finished 10th grade.

“I looked at a couple of places in Saskatchewan, where I was born, about playing there,” Organ said. “I went out for a tryout and realized that I didn’t really feel like doing this. We went back home to Cranbrook.”

That would be the end of Organ’s hockey career, and it would lead to the start of his swimming career. With hockey no longer being an option, Organ was lured to give swimming a shot by a few friends. Organ’s first foray into the sport had him swimming at the same level as children half his age. He knew the basics of swimming from his time spent at the lake as a child, but learning the different strokes was a much higher level of advancement. However, with practice, the sport came very natural to him.

By the end of his first year in the sport he made the provincial championships, which is the equivalent of the state championships in the U.S. He progressed enough that as a senior he knew he wanted to continue swimming in college.

“I had looked at a number of colleges in Canada and was probably going to swim probably somewhere in Canada,” Organ said.

But when one of his coaches at Cranbrook heard that he desired to continue swimming in college, she placed a call to Mike Stromberg who she had swam for at North Dakota.

Organ was in luck. There would be a spot for him at the University of North Dakota. Located in Grand Forks, N.D., the university is only one hour from the Canadian border, but it is 14 hours from Cranbrook.

“I got everything squared away with admissions in the summer and I just hopped on a train and ended up there sight unseen,” Organ said.

It was a gamble Organ was willing to take to continue swimming at a high level, and it paid off. He flourished in the pool at North Dakota, where he was a six-time All-American and was named the North Central Conference Swimmer of the Year.

“I was recruited as a breaststroker, but I could swim all four strokes and I became someone that could fill in almost anywhere where the team needed me to swim,” Organ said.

He didn’t know it at the time, but his ability to swim all different strokes, and do so effectively, enabled him to effectively communicate and coach others in the sport.

His journey through the coaching ranks took him from college to the club ranks and back to college, and it is the college level that he finds most enjoyable.

“I enjoyed coaching at the club level, but I always wanted to get back into college,” Organ said. “Coaching at the college level in swimming is difficult to get into because there isn’t a lot of turnover and jobs are scarce. There is lots of movement at the club level. I was lucky and just happened to be in Nashville when Vanderbilt was beginning its program again.”

It’s been 17 years since Organ received the call from his college coach to become a graduate assistant, and he had to decide which fork in the road he would take. Today, he has no doubt he chose the right one and his belief is reinforced each year when he sees another senior class graduate.

“A big part that I really enjoy is seeing the maturation process and the impact coaches can have on that. Seeing them leave prepared for life as well rounded individuals that succeed in the classroom as well as the pool is one of the best things about coaching.”

What was your favorite NHL team growing up?
Edmonton Oilers. I was growing up during their heyday with Wayne Gretzky and Mark Messier.

If you were in charge of college swimming for one day, what would you change?
I would add 50 meter distances for all strokes.

How many gold medals can Michael Phelps win this summer?
It is going to be really tough for him to duplicate his last performance. I will say he wins six gold medals.

If someone were to visit your hometown of Cranbrook, when should they go?
I’d tell them to go in August when the highs can reach the 90s and the lows are in the 50s. It also stays light from 5 a.m. to 10 p.m. In June, it stays light close to 11 p.m. but the weather is better in August. 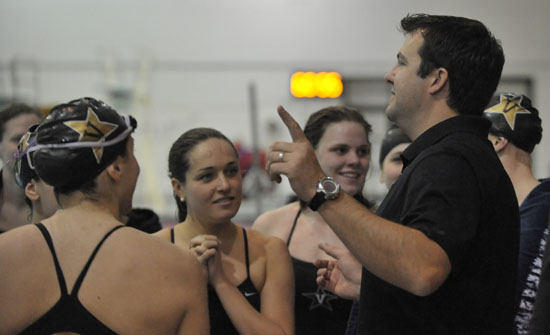