September 23 – December 8, 2016
A Vanderbilt University Fine Arts Gallery Exhibition linked to the 2016 Commons Reading, Strong Inside: Perry Wallace and the Collision of Race and Sports in the South by Andrew Maraniss

Fifty years ago, Vanderbilt University was distinctly different from the place we experience today. Similarly, the university remains the same in many ways, too. Those commonplace observations will not astound anyone. But in what ways is today’s Vanderbilt different and the same?

Race, Sports, and Vanderbilt: 1966-1970 seeks to answer that question through a focus on race and sports. It highlights artifacts, photographs, texts, video and audio–the material culture of the late sixties on the Vanderbilt campus and in the Nashville community. It was a turbulent time filled with contradictions and conflict and remains one that is recalled with a variety of interpretations–some accurate, some highly selective, some inaccurate–by those who lived through that period. For current Vanderbilt students, the sixties stands as a distant era known only through the mediations of texts, music, video, and testimonies and recollections of family and others. 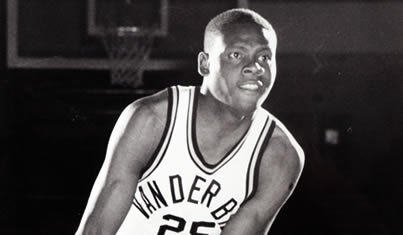 Today’s students will find Vanderbilt much as their sixties counterparts found it: A focus on academics. A collection of colleges and professional schools. Courses taught, and classes attended and missed. The Greek system is as strong today Perry Wallace as in the sixties. Athletic teams have their share of triumphs and disappointments.

Compare how the campus looks today and back then. Buildings have been added and others taken down. Peabody College and Vanderbilt were two separate academic institutions. The faculty and the student body were less diverse than today. Attitudes toward race, segregation, and integration were slowly changing or were hardening. Parietals, the rules governing student conduct in university residences, were delineated in publications such as the Co-Ed Handbook back then and have long since disappeared from today’s lexicon. 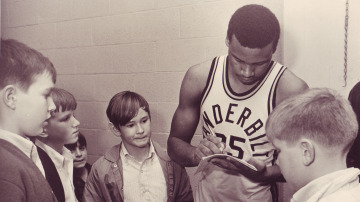 This look back is motivated by an important linkage with this year’s Commons Reading. For the past five years, the Vanderbilt University Fine Arts Gallery has partnered with the Martha Rivers Ingram Commons and Vanderbilt Visions to connect its fall exhibition with the Commons Reading, the text our incoming first-year class reads over the summer. This collaboration has been productive in extending the conversation by bringing our first-year class into the gallery. 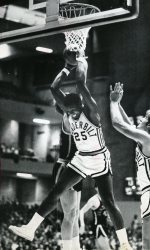 For fall 2016, Strong Inside: Perry Wallace and the Collision of Race and Sports in the South, by Andrew Maraniss, has been selected as the Commons Reading. The text is also the focal point for a series of Visions group discussions, lectures, and events throughout the fall. Strong Inside tells an important story about race, athletics, and Vanderbilt University, providing the social and cultural context for Vanderbilt in the late sixties. The exhibition is designed to provide a valuable supplement to the Visions experience, while expanding the discussion to the Vanderbilt community and the Nashville community at large.

Using Strong Inside and the story of Perry Wallace as its starting point, the exhibition examines and portrays the wider context of the issues central to this period. The 1967 Commodore yearbook included a section titled “The Year Vandy Woke Up.” It may be said that the late sixties was the period Vanderbilt began to wake up, spurred in large part by Chancellor Heard’s leadership in promoting the increased integration of the university and the student body’s engagement with current issues through the Impact Symposium series. The Impact Symposium series at Vanderbilt began in 1964 when a group of students saw the need to increase the campus’s exposure to current issues by providing a forum in which intellectually challenging–and sometimes controversial–speakers could be heard. It is a period that saw the first African American basketball players at Vanderbilt and in the SEC; it was also when Levi Watkins Jr. became the first African American to enter the Vanderbilt University School of Medicine. In 1967, Walter R. Murray founded the Afro-American Association, and, in 1970, he became the university’s first African American on the Board of Trust. Soon after, Bishop Joseph A. Johnson, the first African American to be admitted to Vanderbilt (in 1953) and the first African American to earn a doctorate at Vanderbilt (1958), became the second African American to serve on the Board of Trust. But, as the Maraniss text describes in detail, these and many other developments did not occur easily or without a price. For many on campus at that time, they had to be strong outside as well as strong inside.

The history of the sixties, the civil rights movement, and the Vietnam War have been examined and studied by many scholars and participants. The exhibition seeks to provide a glimpse into this history through an examination of how it played out on the Vanderbilt campus, with the goal of providing our community the opportunity to discuss these issues anew. 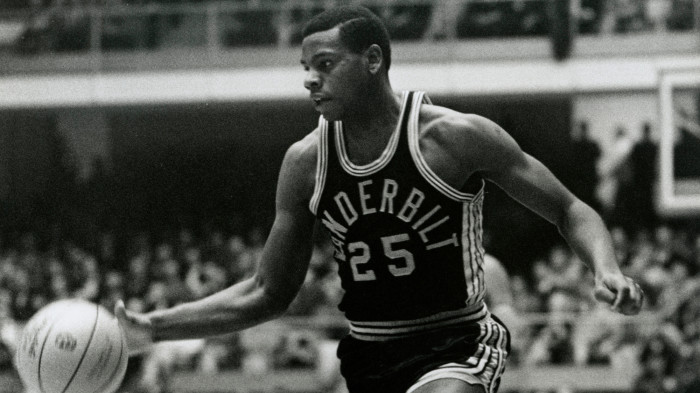 Vanderbilt Visions Module – Short Guide for a Tour of the Exhibition
Goals
This exhibition provides a glimpse into the history of the late sixties and concentrates on how this history played out on the Vanderbilt campus, with the goal of providing our community the opportunity to discuss these issues anew in the gallery.

Background
Race, Sports, and Vanderbilt: 1966-1970 includes photographs from various sources and front pages from the Tennessean during that time period. A touch-screen in the gallery allows visitors to access videos from the 1967 and 1968 Impact Symposia, featuring Dr. Martin Luther King Jr., Stokely Carmichael, Robert F. Kennedy, and Eugene McCarthy. Gallery visitors can access video interviews, conducted by Dr. Rosevelt Noble, of African American alums who were students at Vanderbilt in the late sixties. Artifacts from Vanderbilt University Special Collections include copies of handbooks and yearbooks from that period.