When Vanderbilt women’s basketball head coach Shea Ralph lays out her vision for a championship mindset, she speaks from experience. As a student-athlete and assistant coach at the University of Connecticut, she helped shape one of the most successful and sustained championship cultures in collegiate sports history, playing a part in capturing seven national titles.

When she speaks to her student-athletes about preparing for more than the next game or season—for all the opportunities and challenges that will come their way in life—she again wields the weight of experience. After having one career path altered by injuries, she embarked upon another that led her to coaching and eventually Nashville.

Yet Ralph knows that examples can be more persuasive than speeches. And Katie Lou Samuelson, the program’s new director of player development, is a clear embodiment of everything Ralph advocates and every value she stresses. 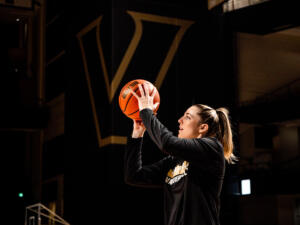 As an All-American, a national champion and a WNBA starter in the prime of her basketball life, Samuelson can help a shooter perfect her release or find open space on the court. She can show players what it looks like to work harder than you think you can.

And in reuniting with her mentor, Ralph, to help bring out the best in the Commodores, Samuelson represents a truth that is at the core of the program and the university that surrounds it: You’re never done learning, even when you’re ready to start teaching.

“I have so much love and respect for Shea, who has been instrumental in my development as a player and a person,” Samuelson said. “She is so good at bringing out the best in people, and she did that for me in my career. When she offered me the opportunity to help do that for the young women at Vanderbilt, it was really a no brainer.”

Samuelson’s arrival coincides with NCAA rule changes passed earlier this month that allow men’s and women’s basketball programs to add two coaches, effective July 1. As director of player development, Samuelson’s responsibilities at that time will include constructing workouts, leading student-athletes through those workouts, on-court coaching and frequently hopping on the court herself in practice.

While NCAA rules prohibit her from going on recruiting trips, she can assist with those duties on campus and with phone calls. She can also travel with the team and be on the bench during games.

Samuelson brings star power to Memorial Gymnasium. The Gatorade National Player of the Year as a high school star at California’s famed Mater Dei High School, she was a four-year starter at UConn, where she won a national title in 2016 and was twice named American Athletic Conference Player of the Year and an AP First Team All-American. She was the fourth overall selection in the 2019 WNBA draft and has started 53 games over the past two seasons for the Seattle Storm and the Sparks. Selected on numerous occasions to represent the United States in 3-on-3 competitions, she was named to the 2020 Olympic team but had to withdraw shortly before the start of competition in Tokyo after a positive COVID-19 test.

In short, while Vanderbilt student-athletes can be counted on to politely say they’ve seen videos of Ralph in her All-American heyday, they don’t need to do any research on Samuelson. They know all about her skills. And they probably follow her on social media.

“It was like I told them we won the lottery,” Ralph said of informing the team of Samuelson’s impending arrival. “They were so excited—and they should be! This doesn’t happen a lot. I know there are certain programs around the country that have players who have chosen not to go overseas [in the WNBA offseason], but right now in professional women’s basketball, that’s where you get most of your money. Lucky for us, Katie Lou wants to stay here.”

Part of a famous family in women’s basketball, with older sisters who starred at Stanford, Samuelson has been part of Ralph’s life for more than decade. Despite the acclaim that accompanied Samuelson before she ever played a game at UConn, Ralph recalled a student-athlete who was simultaneously low maintenance but also driven to get the most from her abilities. 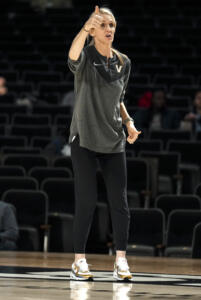 When one of the most heralded prep shooters of all time made just 25 percent of her 3-point attempts in her first 11 collegiate games, she sought Ralph’s advice to disperse the cloud hanging over her. They talked about how much the freshman had to offer—as a player, to be sure, but also as a person and a teammate in a group that played under enormous expectations in what was star power forward Breanna Stewart’s final season at UConn.

Samuelson shot 44 percent from the 3-point line the rest of the way. Her shooting slump ended when she stopped thinking about the one thing she did best and focused on everything else she could do better. (Stewart went out with a record fourth national title and was the first overall pick in the 2016 WNBA draft.)

As Ralph continues to lay a foundation in her second season at Vanderbilt, that’s the message she knows Samuelson will convey in words and deeds: A player with every reason to expect a team, a season and a sport to cater to her should instead think about what she could do for the team.

“What Lou gives us an opportunity to do is show them: This is what great culture looks like. This is what a family environment looks like,” Ralph said. “We are putting those words into action. Immediately, I’m hoping she can bring a different level of leadership for our players—from closer to where they are. She is younger. She’s doing what they want to do right now. And she has humility. She’s consistent in her effort, tireless and determined to do the thing she wants to do—and she holds herself accountable.”

Samuelson isn’t done as a player. Her agreement with Ralph accounts for pursuing coaching and for playing for the Sparks. But she was looking for a way to stop playing abroad in the WNBA offseason—both to avoid the physical and mental wear and tear and to prepare for her  upcoming wedding to former Princeton men’s basketball student-athlete Devin Cannady.  Coaching at Vanderbilt, she said, offered a way to stay connected to the sport and “start to pay my basketball knowledge forward.”

It’s also a way to continue learning and growing—for Samuelson as she puts a toe in the water to see if coaching is a career for her, but also for Ralph as a mentor.

“It was fun to watch her grow,” Ralph said of coaching Samuelson. “As much as … I think I helped her, she helped me even more become a better coach and a better person.”

She long ago invested in Samuelson’s journey, not just for the four seasons that the 6-foot-3 sharpshooter helped the Huskies on the court, but for a lifetime. In a sport that still needs to do more to promote women in coaching, and that would benefit tremendously from making that career path more appealing to some of its professional athletes, Ralph has her own opportunity to pay it forward.

“This is a huge opportunity for all of us,” Ralph said. “For our program, it definitely defines the motto of ‘dare to grow’—and being able to maximize our potential as people but also our potential as student-athletes and the people who are helping them grow.”

Pioneering student-athlete, coach and administrator reflects on her journey and returning to her alma mater to broadcast women’s basketball games this season