Mowery and Van Geffen Rise to the Challenge

Commodore runners excel off the course

NASHVILLE, Tenn. — Admittedly, Lucas Mowery said he really wanted no part of what teammate Caleb Van Geffen was asking him to do.

“I definitely learned some things I wasn’t aware of in the past.”

Mowery and Geffen were part of a four-person team that won Vanderbilt’s on-campus Deloitte Consulting National Undergraduate Case Competition and advanced to the national event in 2019 in Westlake, Texas, where they finished fifth.

That turned out to be a once-in-a-lifetime opportunity for the Vanderbilt cross country runners.

“Definitely one of the coolest experiences I’ve ever had,” Van Geffen said.

Van Geffen, a rising senior from Birmingham, Alabama, singled out Mowery, a rising junior from Orange, California, mainly because of Mowery’s professional demeanor and propensity for being well-dressed. It didn’t hurt that Mowery was also one of the brightest runners in Vandy’s program.

Asked to submit a picture of himself for an award he didn’t originally even know existed or that he even was receiving, Mowery picked out the shot he felt most appropriate – one with him wearing a Vanderbilt cross country shirt. After all, Mowery argues it’s because of the high demands of Commodore cross country that made him the student he is today.

“I would actually argue I don’t think my GPA would be what it is if I wasn’t on the cross country team,” he said. “We have be to up for really early morning classes, and unlike most other things that I do in life, I actually have to sleep for this.

“When you have to get all of our homework done by 10 p.m. you’re kind of forced to focus down and just get done what needs to get done as opposed to lollygagging – and I would not be able to do it all without the support of that team.”

So because of Mowery’s conquering the classroom like he would a challenging cross country course (and partly because of that impeccable sense of fashion), Van Geffen went to his younger teammate for the Deloitte competition. That duo and two of their classmates were given their case on a Wednesday afternoon and had until Friday to come up with a presentation to judges.

Van Geffen explained that the timeline allowed participants about 30 hours to complete the assignment – but since he and Mowery still had to get their runs in, their timeframe shrunk that much more.

Their task was to create a market strategy for a startup tech business that had designed the best available software for automated vehicles. Mowery, Van Geffen and their teammates landed on a strategy of cornering the luxury ride-share market.

The judges were impressed. 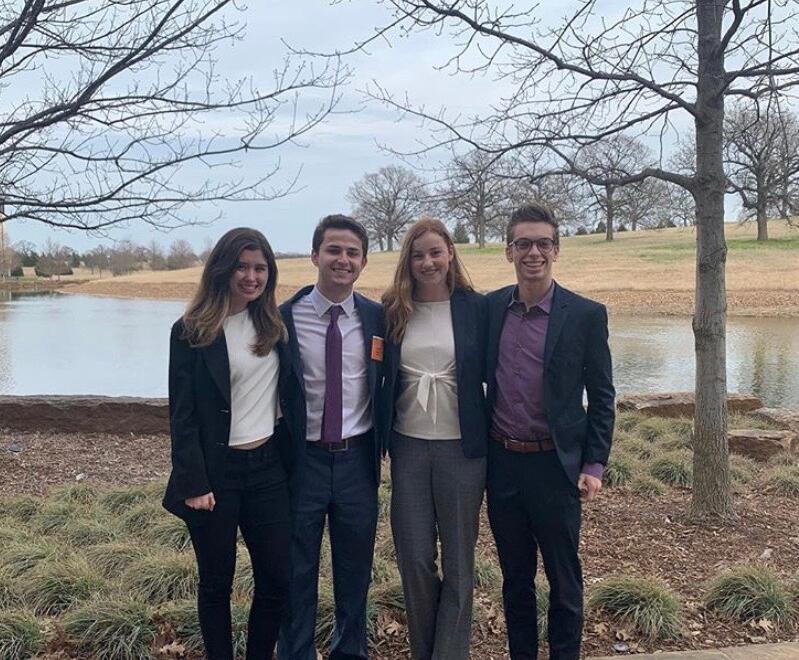 “It was basically a 36-hour, nonstop, on-the-go case where we made a PowerPoint, had to solve the solution because there was a problem presented, had to flush out the way that worked, had to get all our graphs together, all our data and turn around and present it to the panel of current Deloitte consultants,” Mowery said.

Van Geffen and Mowery moved on to the national competition where they faced about 20 other teams from universities from around the country. This time they were only given six hours to tackle a similar case – the University of Pennsylvania came away as the winners.

Moving forward, Mowery and Van Geffen will continue to push themselves both in the classroom and on the course. That’s because that’s how the Vanderbilt culture is set up and why Van Geffen pushed Mowery out of his comfort zone in the first place.

“I think it’s always been an attitude on our team that upperclassmen are going to push the underclassmen when they come in where you have to be involved in something other than athletics because it makes you a better person and opens your mind to what you can do,” Van Geffen said. “It’s the environment on our team. I was molded by our culture and it’s just been a great culture for years.

“It’s definitely been a strong emphasis on academic excellence, extracurricular excellence and I think that’s going to stay for a long time.”

Mowery, now a chemical engineering major who has recently had a peaked interest in bioinspiration, made a point to say how ecstatic he was to receive the William Ma Award and how grateful he was to be able to participate in the Deloitte competition. And it’s those opportunities provided by Vanderbilt that has has him enjoying life as a Commodore.

What comes next will undoubtedly be more success.