Mabel Brings it All to the Table

NASHVILLE, Tenn. — When you have given aid to someone facing a life-and-death crisis, the pressures of trying to fill a bowling frame are quickly put into perspective.

Such is but one of the lessons 19-year old Vanderbilt junior Mabel Cummins has learned during her brief but busy life.

A child bowling prodigy, Cummins’ days are now meticulously organized between her key role on the Commodore bowling team, staying on top of academic classes such as organic chemistry and physics, responsibilities as a licensed volunteer Emergency Medical Technician in the Vanderbilt Hospital Emergency Room, president of Vanderbilt’s prestigious Honor Council and also assisting with research for a Vanderbilt anesthesiology laboratory.

“I don’t have any free time,” Cummins said, stating the obvious. “I like my life because everything I do is something I love doing. Bowling, honor council — I love the classes I am taking, they are super interesting. All of my EMT stuff, I love working with people. It doesn’t feel like work. Some things are dreary — studying for tests and memorizing some things — but otherwise it’s all things I enjoy.” 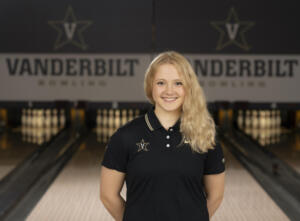 As president of the Honor Council, of which teammate Jennifer Loredo is a member, Cummins typically has several meetings a week plus a variety of public relations duties, all revolving around protecting and enforcing the University’s Honor Code which each student writes on all tests and major work: “I pledge on my honor that I have neither given nor received unauthorized aid on this examination.”

It might seem that bowling has become an afterthought for Cummins, who could teach a master’s course on multi-tasking or time management. Far from the truth.

“When we step out of the hotel on competition days, bowling is all I’m thinking about,” Cummins said. “When we get back to the hotel I can turn my attention to school and Honor Council and all the things I missed academic-wise while at the competition. It’s nice to be able to turn my brain off and not have to think about physics or organic chemistry classes or my Honor Council stuff and do something that I like, which is bowling.”

She’s been pretty good at the bowling part, too, enjoying a monster January in which she was voted the Southland Bowling League’s Bowler of the Month after making the all-tournament team in each of Vanderbilt’s three tournament appearances.

In the process, Cummins has created some, “inside baseball,” buzz by at least temporarily changing locations in Vanderbilt’s potent rotation along with some consternation with the Commodore coaches trying to figure out if she makes a bigger contribution in her former anchor position or in the current lead-off spot.

“I like both positions,” Mabel said, not settling the tactical debate. “I like being in the lineup. I have really good energy and that’s what you need in a leadoff. I feel I carry that responsibility well. Being positive and upbeat regardless of what happens — you learn that in college bowling. If you don’t make a good shot, you don’t want to bring the negative energy back to the team.

“Anchoring has more stress, more pressure because you get more shots. For someone that didn’t understand bowling it would appear anchor is a more stressful position but the type of stress is different. When you are leading off, you want to make sure you throw a good shot to start your team off well. You want to throw a good enough shot that everyone following can read your ball. If you throw a poor shot and say, ‘that’s pretty good,’ and everyone adjusts off you, that negatively impacts your team.” 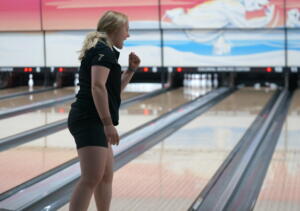 Cummins does not shy from the possibility of a game’s outcome coming down to her shot, but as she’s matured she sees it as a challenge and little more.

“I do a lot of work on the mental game and try to approach it from the perspective that in the end it’s just bowling, not life and death,” Cummins said. “I’m an EMT and I’ve had to face life-and-death situations with patients. That puts bowling in perspective. No one is going to die if I don’t strike here.

“It may feel like the end of the world for a few hours if I throw a bad shot and our team loses because of it but in the end it’s just bowling and you can recover from it.”

Cummins has already tried to help her younger teammate and potential anchor heir, Paige Peters, consulting with the coaches and offering advice, “similar to what Maria (Bulanova) did for me a couple years ago.”

And while Cummins says bowling isn’t a life or death thing to her, don’t kid yourself that she isn’t all-in on the big picture. Just ask her about her bowling goals.

“You can work on individual things throughout the year — your physical game, your mental game — that will help you be a better bowler or team player. But in the end it’s a team event.”