Jerkins Gets It Done for the Dores

Getting to know Vanderbilt's junior safety

NASHVILLE, Tenn. — His stature might be smaller than most of his opponents, but his heart and love for football will always be bigger.

Dashaun Jerkins, a 6-foot, 190-pound safety from Woodbridge, Virginia, is known for his work ethic.

In the offseason, he can almost always be seen in the weight room, on a practice field or in his dorm doing schoolwork.

Jerkins’ work ethic was noticed by the Vandy coaching staff early his freshman season. He was one of 12 Commodores to play in a game as a true freshman in 2018. 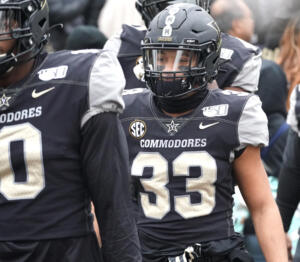 After posting 14 total tackles – including 10 solo stops – in the season opener against Georgia, Jerkins proved why he belongs in the SEC. He was ranked among the SEC’s top first-year contributors and had at least three tackles in each of his starts.

Slowed by injury and only able to start in nine games, Jerkins still finished his 2019 campaign with 58 total tackles – ranking second on the team.

While the 2020 offseason was long and uncertain, Jerkins picked up right where he left off to start the campaign. In his two appearances this season Jerkins has 16 tackles and a forced fumble.

Jerkins recently took some time with VUCommodores.com to express his love for football, his size compared to his opponents, how he is fitting in to the new Vanderbilt defense and much more:

VUCommodores.com: You play with so much passion. What do you love so much about the game of football?

Jerkins: “I love football so much because I get the opportunity every day to both develop and test my skills. Football has given me so many opportunities and taken me places I would have never dreamed of.”

You really stepped up last year while starting at safety. What was your mindset week-to-week knowing you had to be the last line of defense?

“I went in week-to-week making sure I always knew everyone’s assignments and alignments. Even though I was a young guy, I really honed in on making sure I knew how to communicate with my teammates on the field. Putting them in the right place gave us the best chance to be successful as a team.”

What separates you from every other safety in college football?

“First, I’m a natural-born baller. I believe I have a great understanding of football and have the ability to feel things out throughout a game. I feel I get great reads that tell me where the ball is going. I see myself as the best open-field tackler and safety in college football.”

You are smaller than most of your opponents. How do you handle that chip on your shoulder when you play?

“Being smaller than a lot of our opponents has never been an issue with me. For most of my football career, I played linebacker, which means you have to be physical. Going through those years helped me to become the physical player I am. It taught me how to use my mind more than my body to make the plays. My mind helps me always stay ahead of the play.” 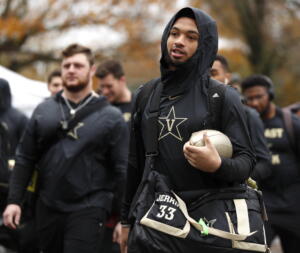 “It has been great playing under coach Roof because I feel he understands what it takes to win. He is always going to be honest with us about everything. He really makes the game simple for us by putting us in good positions to fly around and make plays. He is a great coach and an even better person.”

Besides your practice and lifting schedule, what are your weeks like during the season?

“It has been a grind keeping up with everything during this pandemic. I have been trying to stay ahead of my schoolwork early in the week. When that gets finished, I watch a lot of film and recover my body.

“I learned last year, taking care of your body is one of the most important things going through a season. I try my best to stay on top those little things that make the difference on and off the field.”

What are your goals for after college?

“After college I want play in the NFL and put myself in a position to take care of my family. Getting them out of struggles they still go through today is important to me.”