LAS VEGAS — Vanderbilt pulled off a stunning rally to defeat Nebraska 4-3 and won the title at the Stormin’ Blue & Gray White Classic on Sunday.

The Commodores appeared on the brink of a disappointing defeat when they trailed the third-ranked Huskers 3–0 and began the fourth game of the best-of-seven struggling with three opens in the first seven frames. However, Emily Rigney nailed a strike in the eighth, Mabel Cummins added another in the ninth and Maria Bulanova struck out.

Bulanova, the reigning NCAA Player of the Year, was instrumental in a victory in Game 5 with her 10th frame strikeout and Game 6 was a Vandy blowout 243-190 to knot the match at 3-3.

Vandy started the deciding game in a hole as Nebraska began with strikes in four of the first five frames. But the gutty Commodores mounted yet another rally – Adel Wahner began it by striking in the sixth, Samantha Gainor in the seventh, Cummins in the ninth and Bulanova going off the sheet to cap the remarkable comeback 226-202.

“In the fourth game we talked about extending the match,” Vanderbilt head coach John Williamson said. “And the first part of that game was not characteristic of how we had bowled all weekend but (Rigney) made a big shot that gave us life. Our leadership took over at some point – this team has a lot of pride.”

Bulanova made big shots throughout the match and Williamson realizes the bar is set high for his star senior.

“We know that if we can give her a chance to win we have one of the best anchors in the country,” Williamson said about Bulanova. “She wasn’t really comfortable today but she delivered when it mattered. It may not seem fair but we expect her to deliver because we know what she does.”

Williamson was also aware of the predicament Rigney was in when she entered partway through the title match.

“That’s a tough position to come in at,” he said. “There was little room for error but she has a lot of pride, a lot of experience and she settled in and made big shots.”

The tournament championship, the 35th in program history for Vanderbilt, came along with a perfect 11-0 record and included a convincing win in the bracket opener against No. 1 ranked McKendree 4-1. Vandy lost the first game, then ran off four straight Baker wins to defeat the Bearcats for the second time in three days.

Two Commodores made the all-tournament team based upon their exceptional play in Saturday’s traditional games. Wahner was second, her high-water college finish, with a 239 average and Gainor placed fifth after averaging 231 over the five games.

Williamson had not made a single substitution in Vegas until midway through the Nebraska match when he inserted Rigney for Angelique Dalesandro. It took Rigney a couple of frames to get into the swing of things but then the veteran lefty came through with several big strikes and frame fills.

Otherwise, the rotation of Wahner, Gainer, Dalesandro/Rigney, Cummins and Bulanova seemed set in cement as all were performing at a high level.

Vanderbilt, now 34-15 on the season, heads to Philadelphia on Jan. 17-19 to compete in the Northeast Challenge. 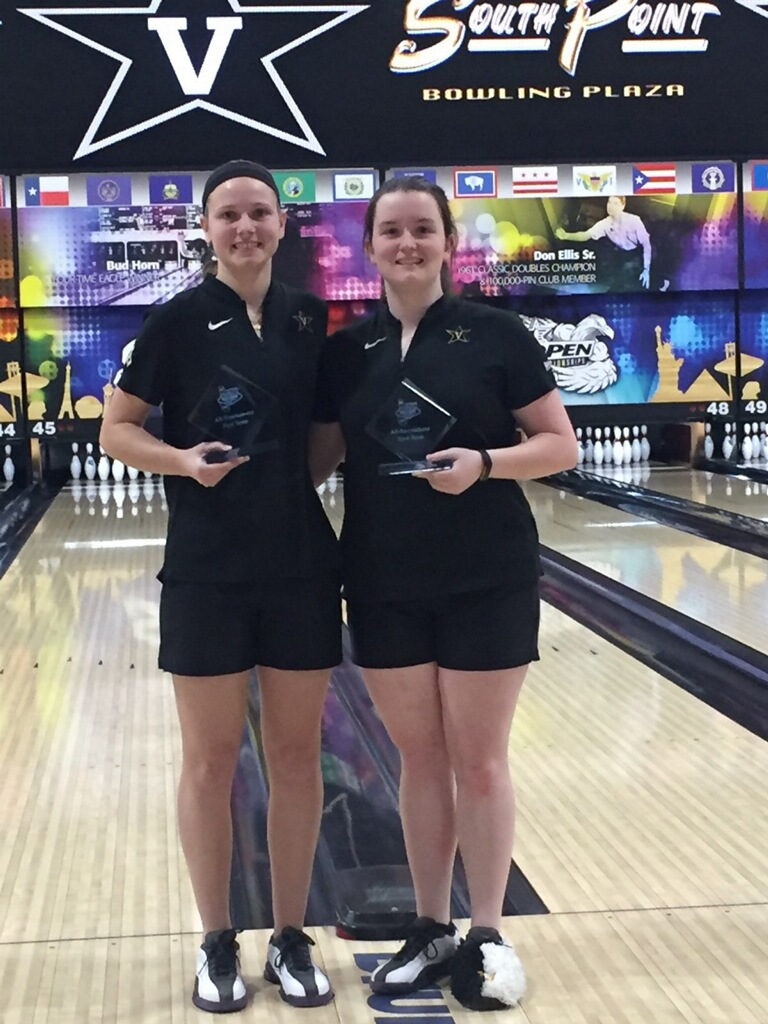