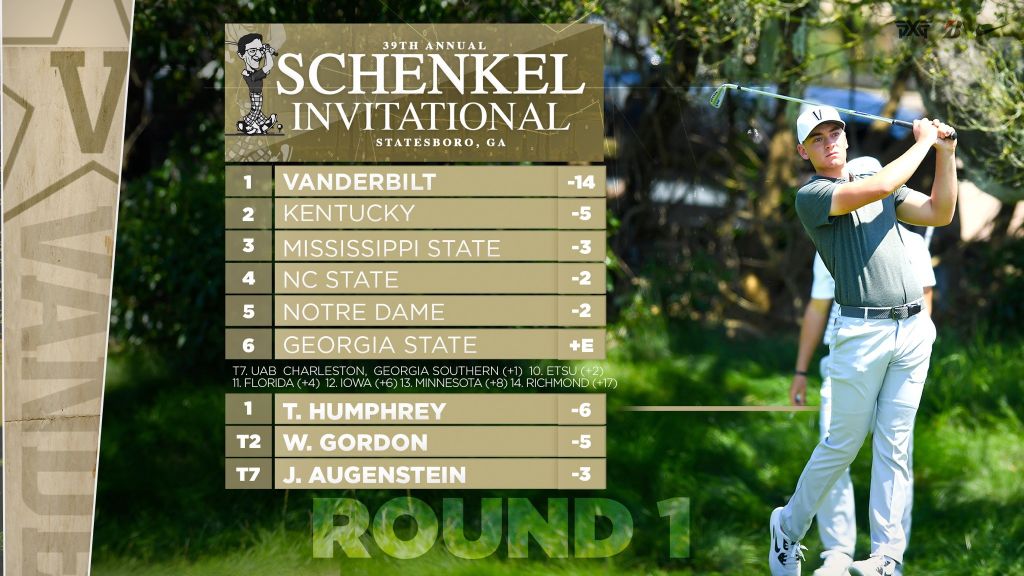 Vanderbilt’s fifth-ranked men’s golf team is off to a hot start at the Schenkel Invitational in Statesboro, Ga. and the Commodores have the team and individual lead after the first round of play at the par-72, 6,962-yard Forest Heights Country Club. The Commodores have a nine-shot lead on the field after a 14-under par, 274, on Friday, while senior Theo Humphrey is the individual leader after a first-round 66 and junior Will Gordon is tied for second after he fired a 67.

Humphrey carded seven birdies and one bogey in his round on Friday, with his day punctuated by four straight birdies. Gordon also had seven birdies in his first trip around Forest Heights, and is tied with Archer Price of Georgia Southern for second. Sophomore John Augenstein carded a first-round three-under par, and is in a tie for seventh on the individual leader board, while junior Patrick Martin and redshirt freshman Mason Greenberg each finished the day with an even-par 72.

The Commodores pace the field in a number of different categories after the first round of play in Statesboro, including par-three scoring (2.90), par-four scoring (3.94) and total birdies (27).

“I thought the guys played really well today,” said Vanderbilt head coach Scott Limbaugh. “We got off to a really good start on the front nine which I think was really big for us to get some momentum. We showed some resiliency halfway through the round as we made a few bogeys, but really responded well and finished pretty strong. Theo’s finish was huge for him and the team. He played awesome today and never got much to fall on the greens, but stayed positive and birdied his final four holes. Will was solid all day long as he got off to a strong start and hung in there and really lifted the team up. In my opinion, today was a big round for John and he handled that well and stayed pretty locked in all day long. Mason is taking good steps and he battled well and finished with a birdie at the last which was big for him and our team.”

The Commodores’ nine-shot lead is their largest advantage of the season after the first round in a tournament this season. Kentucky is second on the team leader board with a five-under, 283, while Mississippi State is third with a three-under, 285.

“It was a really good start for our team today, but it was just one round,” said Limbaugh. “We learned last week that our actions determine our outcomes and the challenge is to always stay mentally tough and focused on the right things. Tomorrow is an important day because it affects where we are trying to go as a group.”

The second round of the Schenkel Invitational continues on Saturday, with the Commodores beginning their round at 9:30 a.m. CT.