MILLSBORO, Del. — It was a disappointing end to an otherwise encouraging fall campaign for the Vanderbilt bowling program.

The Commodores lost all three of their best-of-seven Baker games by the narrowest of margins to finish the Hawk Classic in fourth place. In each of its 4-3 defeats to Sam Houston, Fairleigh Dickinson and North Carolina A&T, respectively, the Commodores had chances to win – twice in the 10th frame of the deciding seventh game – and came up just short.

It was a combination of timely strike shooting by the opponents mixed with just enough critical errors at the wrong time and an overall lack of rhythm throughout the lineup that had shined for the better part of the previous two days.

Vanderbilt’s opening match with Sam Houston began by digging an 2-0 deficit with two sub-190 scores and a potent 275 by the Kats. Down 3-1, Vandy battled back to tie with 220 and 238 scores, setting up a classic seventh game. The Dores rattled off seven straight strikes but found that a 242 was not enough when the opponents were assembling a 276 of their own.

The Commodores then faced FDU and seemingly had the outcome in hand with a 3-1 lead despite not having a single game over 192. That foreshadowed trouble as the Knights twice topped 212 to tie the match. 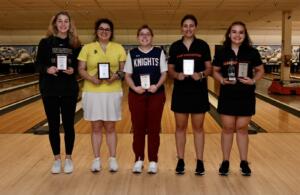 Vanderbilt switched its rotation in an attempt to shake off the doldrums going with Mabel Cummins, Angelique Dalesandro, Samantha Gainor, Paige Peters and Angelica Anthony in the deciding game. Vandy held a slight edge most of the way but it came down to the 10th frame.

Anthony could have clinched it with a double but went strike-8 against FDU’s strike-strike to drop a tough one 210-205.

Vandy had beaten A&T by more than 100 pins Saturday but Sunday’s Baker had a different vibe. The right lane was hot and both teams traded wins with hefty scores until the Dores broke through in Game 5 to grab a 3-2 advantage.

Vanderbilt would post solid scores of 224 and 222 in the last two Bakers but the Aggies were sizzling with 247 and 235 to take third place.

Vanderbilt (36-14) is now off until Jan. 8 when it travels to Las Vegas for the Stormin’ Blue and White Classic.