MILWAUKEE (AP)– Things started so well for Vanderbilt, Kevin Stallings found himself looking away from the scoreboard.

The Vanderbilt coach couldn’t believe his team was making things so difficult for Marquette (No. 13 ESPN/USA Today, No. 14 AP).

“I was sure that I was like in a mirage or something, just seeing things,” Stallings said. “I tried to stop looking.” 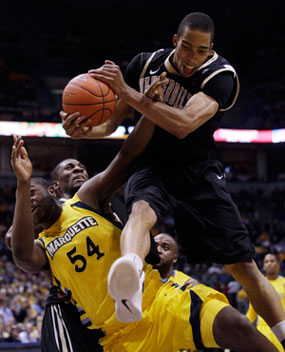 Jeffery Taylor scored 13 of his 19 points in the second half to help Vanderbilt steamroll Marquette 74-57 on Thursday night.

John Jenkins added 14 points, and Lance Goulbourne had 13 points and 16 rebounds for the Commodores (9-4), who beat a ranked team for the first time this season.

“Everybody knows we had a lot of close games and some games we probably shouldn’t have lost,” Jenkins said. “So getting a road win like this is really big for our confidence and moving forward going into the SEC.”

Vanderbilt, considered a top-10 team at the beginning of the season, came in unranked after a Dec. 17 loss to Indiana State. The Commodores came in with a 0-2 mark against ranked teams this season, with losses to Xavier and Louisville — both in overtime.

But the Commodores looked worthy of their preseason ranking, smothering the Golden Eagles on defense and doing just about anything they wanted on the other end.

Stallings loved seeing his team finish a game strong, something he says his team has struggled with since last season.

“We’re a little bit maligned for not being tough, and we’ve got a pretty tough team,” Stallings said.

Stallings said Marquette seemed to miss center Chris Otule, who is out indefinitely after injuring his left anterior cruciate ligament earlier this month.

Marquette big man Davante Gardner got in foul trouble early and Vanderbilt made the most of it.

“With Otule being out, they’ve been able to have success,” Stallings said. “But then all of a sudden we get a couple of quick fouls on Gardner, the complexion of the game just changes completely.”

Marquette has lost two of its past three after starting the season 10-0. The Golden Eagles dropped their first game this season at LSU on Dec. 19 and shot 36.2 percent in that game, its previous season low. The Golden Eagles rebounded with a victory over in-city rival Wisconsin-Milwaukee a week ago.

But the Golden Eagles seemed a step slow on both ends of the floor, particularly on one defensive play early in the second half.

With Vanderbilt inbounding the ball from the baseline, Marquette somehow left Jenkins — Vanderbilt’s leading scorer and best 3-point shooter — wide open from long range. He nailed the 3 to give the Commodores a commanding 55-32 lead with an agonizing 14:49 left in the game.

Things went poorly from the start for the Golden Eagles, who shot 1 for 16 from the field to start the game.

Marquette tried to get the ball to Crowder down low early on, but it wasn’t working with several Vanderbilt defenders collapsing on him every time he touched the ball. Crowder started the game 0 for 7.

“We played a tremendous, tremendous defense,” Taylor said. “I think that’s the best defense we’ve played consistently all year. We made it tough on them. We did a lot to take away from their offense. We kind of messed them up a little bit, got them out of their rhythm.”

Vanderbilt welcomed back center Festus Ezeli, who had played in only two games this season while recovering from a right knee sprain. Ezeli entered the game with 16:46 left in the first half, wearing a bulky brace on his knee.

“It was great to have Festus out there,” Stallings said. “He wasn’t his normal self, but as you can see, he does change things a bit when he’s in.”

Vanderbilt took a 29-6 lead when Ezeli missed a free throw, a long rebound came out to Vanderbilt’s Kedren Johnson and he fed the ball to Jenkins, who drilled a 3-pointer — then wildly pumped his fist in the air in celebration.

But the party was just getting started for the Commodores, as Taylor stole the ball from Junior Cadougan and coasted to the other end for an emphatic slam dunk that put Vanderbilt up 31-6 with 8:44 left in the first half.

Brace and all, Ezeli showed he still could leap, slamming home an alley-oop pass from Jenkins for a 35-8 lead with 7:15 left.

Marquette then went on a short 8-2 run, but missed an opportunity to really cut into Vanderbilt’s lead. The Golden Eagles came up with stops on four straight Commodores possessions, but came away with only a pair of free throws by Crowder.