Commodores to play at Oklahoma in 2019 SEC/Big 12 Challenge 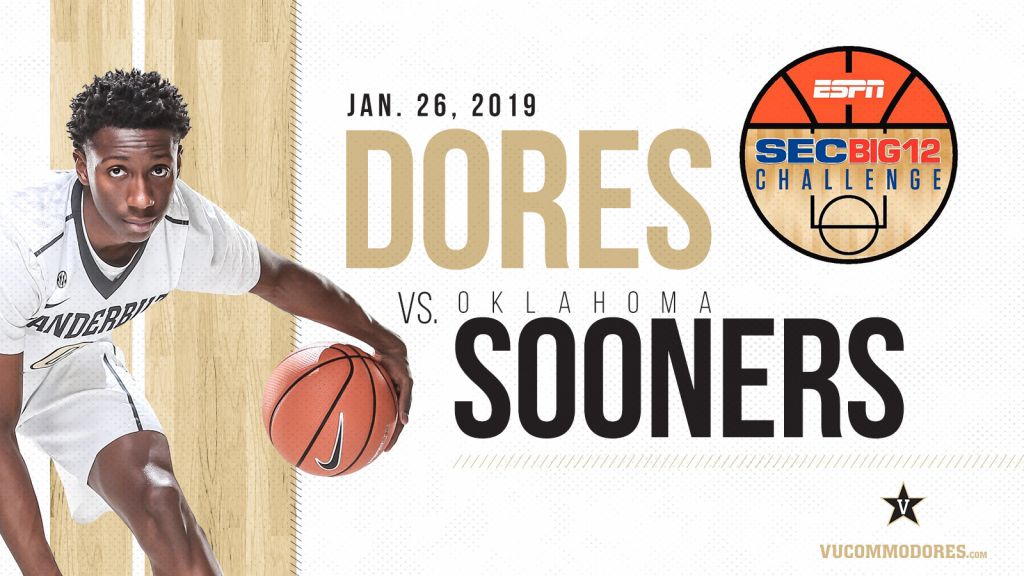 Vanderbilt men’s basketball will once again be a participant in the SEC/Big 12 Challenge in 2019 when the Commodores take on Oklahoma in Norman, Oklahoma on January 26. The start time and network designation will be announced at a later date.

Vanderbilt has won their last two games in the challenge, with wins coming over Iowa State in 2017 and TCU in 2018.  All time in the event, Vanderbilt owns a record of 2-3.

A record eight SEC teams participated in the 2018 NCAA Tournament and excitement for the 2019 season is building with 19 of ESPN.com’s Top 100 recruits having signed with SEC schools. In all, the SEC boasts six of ESPN.com’s Top 25 in-coming recruiting classes.

This will be the fourth year that a bye in the league schedule for participating teams was created to accommodate the single-day format. The four SEC teams not participating will play each other in conference games the same day. The first two years of the challenge were played over several days in November and December but the 2019 event will be consolidated to one single day in January.

Four of the 10 games will be televised on ESPN, four on ESPN2 and two games will air on ESPNU. All 10 games will also be available on the ESPN app. ESPN’s College GameDay Covered by State Farm – the Saturday roadshow that discusses the top storylines of the college basketball season – will originate from one of the Challenge games.

“The Big 12/SEC Challenge is a unique opportunity to showcase our basketball programs. Playing the event on a single-date in January puts our programs in the college basketball spotlight,” SEC Commissioner Greg Sankey said.

Start times and network designations will be announced at a later date.