NASHVILLE, Tenn. – After taking the reins of the Vanderbilt women’s basketball program earlier this month, head coach Shea Ralph has announced her inaugural coaching staff with the additions of Tom Garrick, Ashley Earley and Kevin DeMille.

“I am extremely excited to bring these three talented, skilled and passionate coaches to our Vanderbilt women’s basketball program,” Ralph said. “As human beings, they represent and embody the values that will be the foundation of our success. As coaches and ambassadors of our university, they are a diverse and experienced group that will positively impact our players immediately on and off the floor and I’m very excited to get to work with them each and every day.”

Garrick, a former associate head coach at Vanderbilt, returns to the role after serving the past three seasons as head coach at UMass Lowell. Earley, an All-American with the program as a student-athlete from 2001-05 and an assistant coach from 2013-16, comes back to Music City after spending the past two seasons as an assistant coach at Penn State. DeMille joins Vandy after working with George Washington for the past five seasons. 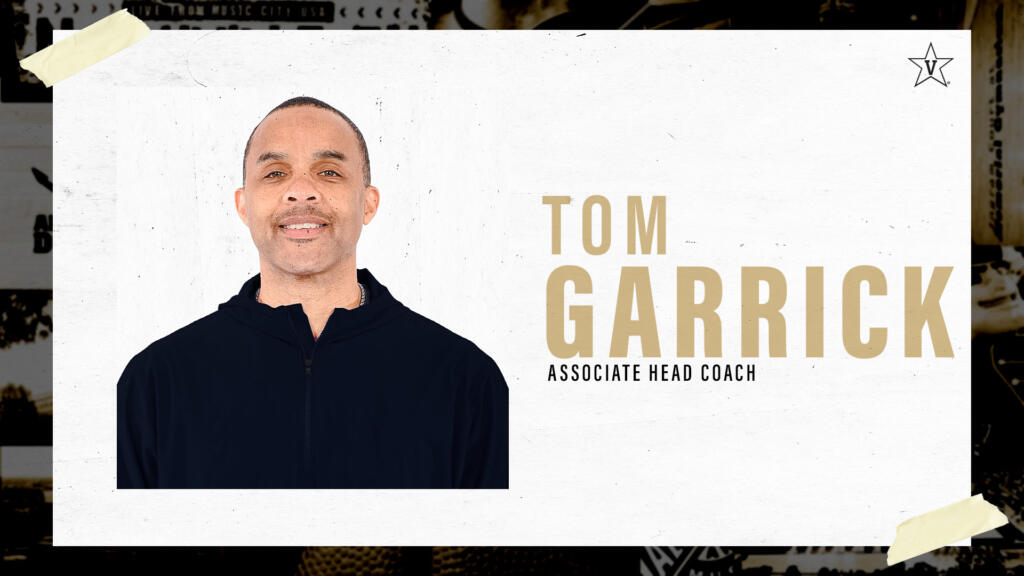 Tom Garrick
Associate Head Coach
On the Vanderbilt bench from 2009-15, Garrick helped guide the Commodores to five NCAA Tournaments with four 20-plus win seasons and 120 victories along the way. In Music City, he tutored Jence Rhoads to honorable mention All-America honors in 2010-11 while Commodore guards garnered seven All-SEC accolades with three named to the SEC All-Freshman team.

Garrick also played an instrumental role in the success of Vanderbilt standouts Jasmine Lister and Christina Foggie. Lister shattered the program’s record for minutes played and ranked No. 3 on Vandy’s all-time list for career assists, while Foggie led the SEC in scoring as a senior, became the school’s all-time leader in three-pointers and was a second-round pick in the 2014 WNBA Draft to Minnesota.

Before his return to West End in 2021, Garrick spent three seasons as an assistant coach at Boston College from 2015-18 before taking over as head coach at UMass Lowell. With the River Hawks, he guided a program that won just four games the season before his arrival to 16 victories in his second season in 2019-20.

A seasoned coach with a pair of head coaching stints, Garrick also led the Rhode Island women’s program for six seasons from 2003-09 and finished his tenure with the second-most Atlantic 10 wins in program history. He took over following two years as an assistant coach from 2001-03, after which he started his coaching career with the Rhode Island men’s program in 1998-99.

A four-year NBA veteran, Garrick was drafted by the Los Angeles Clippers in 1988 out of Rhode Island and played for the Clippers, San Antonio, Minnesota and Dallas. During his professional run, he also played overseas in Germany, Turkey and Spain across a five-year career in Europe.
As an athlete at Rhode Island, Garrick was nicknamed “The Chief” and finished his time in Kingston ranked among the school’s top 10 in scoring (1,573 points), steals (189) and assists (407), and was inducted into the Rhode Island Athletic Hall of Fame in 1998. 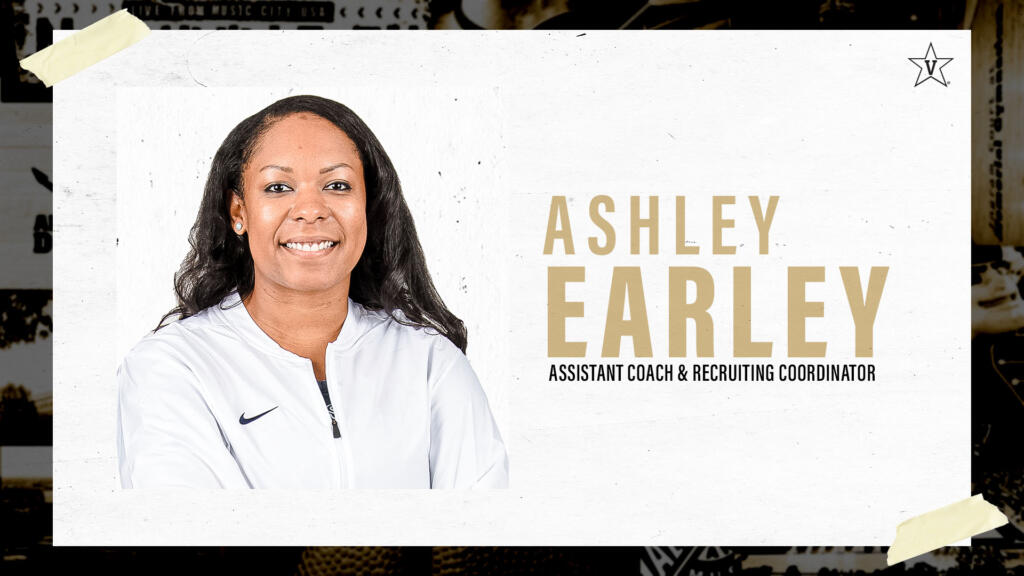 Ashley Earley ’05
Assistant Coach and Recruiting Coordinator
A member of Vanderbilt’s 1,000-point club, Earley returns to the program for her second stint as an assistant coach after being on the Vandy bench from 2013-16. With a track record of success in Memorial Gymnasium as a student-athlete and a coach, Earley coached Vanderbilt to the NCAA Tournament in 2014 while working hard on the recruiting front to bring in a pair of top-20 classes, including the nation’s sixth-best unit and the top class in the SEC in 2016.

During her time with the program as a coach, Earley also tutored Vanderbilt’s 2014-15 frontcourt to ranking as one of the most efficient in the nation. At season’s end, four players connected on better than 50 percent from the field while the team ranked 10th nationally at 45.4 percent.

An All-America, all-region and first team All-SEC honoree while a candidate for both the Naismith Trophy and the Wooden Award after the 2004-05 season, she closed her career leading Vandy in points, rebounds and steals for the season while shooting 64 percent from the floor. To this day, Earley is fifth in career field goal percentage (57.8) and eighth in single-season rebounds (300 in 2004-05) while ranking third for total games played (135). Along the way, she helped the Commodores to a pair of Sweet 16 appearances and the Elite Eight in 2002.

After her career at Vanderbilt, Earley was drafted by the Indiana Fever in the 2005 WNBA Draft and played professionally overseas for Maccabi Tel Kabir in the Safsal Israeli League. 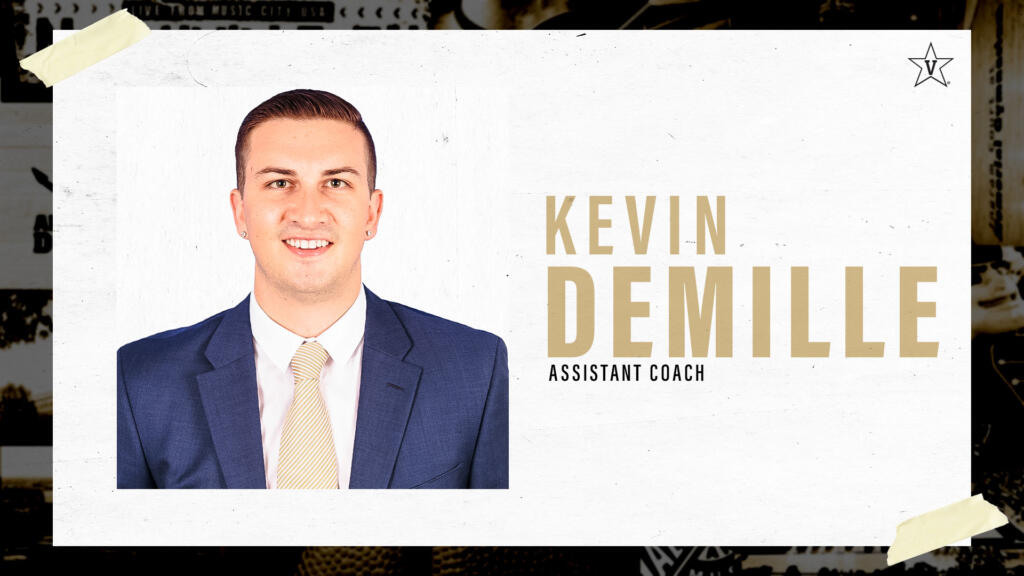 Kevin DeMille
Assistant Coach
With seven years of experience in various roles with the UConn women’s basketball program with Ralph and head coach Geno Auriemma, DeMille joins Ralph’s staff at Vanderbilt after five seasons at George Washington and joins the program with seven trips to the national championship with five victories in the title game under his belt.

In Washington, D.C., DeMille worked his way up from an assistant director of operations role to assistant coach with a strong track record of developing talent. In 2018-19, DeMille helped develop the team’s top post players in underclassmen Neila Luma and Kayla Mokwuah. Under his guidance, Luma increased her scoring output by 3.3 points per game from her freshman to sophomore year. Mokwuah blossomed in league play, increasing her points per game output by more than two points against league foes.

In 2019-20, DeMille guided Mokwuah, Alexandra Maund and Mayowa Taiwo, who all ranked among the Atlantic 10’s top seven in field goal percentage. Taiwo went on to earn All-Rookie honors during her initial campaign under DeMille’s watch.

Working for former UConn great Jennifer Rizzotti at George Washington, he also spent time as video coordinator for the women’s national team at the 2014 FIBA World Championship in Istanbul, Turkey. DeMille was also on staff for the gold-medal winning women’s national team in the 2016 Olympics in Rio de Janeiro, Brazil.

At UConn, DeMille spent his four undergraduate years as a practice player and student manager before serving one semester as a graduate assistant. He was then hired as the assistant director of operations before moving on to George Washington with Rizzotti.