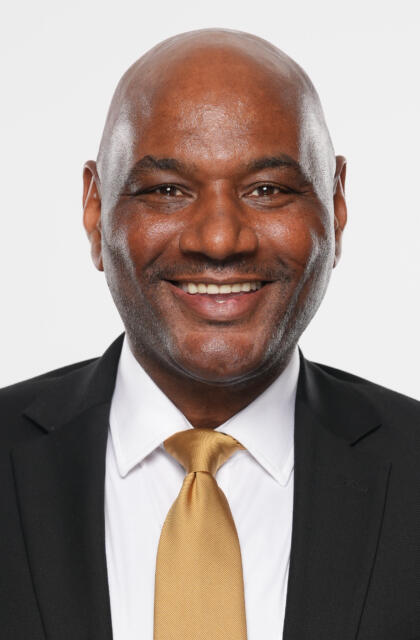 The 2022-23 season marks the second for Michael Curry Sr. as an associate head coach with the Vanderbilt men’s basketball program.

A former head coach for the Detroit Pistons and Florida Atlantic University, Curry brought to West End more than 20 years of basketball experience as a coach, player and front-office executive.

Curry, who played 11 seasons professionally both in the NBA and overseas, served as an assistant coach for the Detroit Pistons for one season before being promoted to become one of the youngest head coaches in NBA history in 2008 when he was 40. Curry went on to serve as associate head coach of the 76ers from 2010-13.

Curry was named head coach at Florida Atlantic in 2014. The Owls upped their win total in each of his final three seasons which included the program’s first win all-time against a Big Ten program — 79-77 over Ohio State.

He guided Ronald Delph to all-conference honors in 2017-18 and also improved the program’s academic performance to a perfect APR of 1000. Most recently, Curry spent the 2020-21 season on the coaching staff at the University of Georgia.

During his playing career, Curry spent six of his 11 NBA seasons with the Pistons which included 33 playoff games and a trip to the Eastern Conference Finals in 2002-03. He also had stints with the Indiana Pacers, Toronto Raptors, Milwaukee Bucks, Washington Bullets, Philadelphia 76ers and Sacramento Kings and, in 667 career NBA games, Curry totaled nearly 2,986 points, 1,045 rebounds, 804 assists and 333 steals.

The gym at Curry’s High School, Glenn Hills, was named in his honor in 2014. In 2015, Curry was inducted into the Augusta City Classic Hall of Fame.

Michael and Katrina are the proud parents of sons Deon, Michael Jr, and daughters Ashley and Crysten.