The Commodores will play 18 conference games starting Dec. 30 and running through March 2 leading up to the SEC Tournament at Bridgestone Arena. No games were scheduled the weekend of March 6 to allow a window for makeup games.

While every matchup will be vitally important for Vandy and second-year head coach Jerry Stackhouse, here’s a closer look at five that stand out as well as the full schedule:

Vanderbilt opens the conference season just before the turn of the calendar by welcoming Florida to Nashville. There would be no better way to get off to a good start than defeating the Gators.

The Dores have dropped four in a row to Florida, who is expected to be one of the top contenders to win the SEC this season. Vandy nearly knocked off Florida at Memorial Gymnasium in February by trimming an 18-point, second-half deficit to six before the visitors hung on to escape with a 61-55 victory.

Once again a preseason favorite to win the SEC, Kentucky will host Vanderbilt in early January in a series that is approaching 200 all-time matchups.

Vandy’s last trip to Rupp Arena was notable with then-freshman Dylan Disu finishing with 13 points, 11 rebounds, five blocks and four assists in a 71-62 defeat. Disu is one of seven current Commodores who played in that matchup.

Kentucky will make a return trip to Memorial Gymnasium on Feb. 17.

Vandy’s long-standing rivalry with Tennessee resumes with Act I of a two-game series Jan. 16 in Knoxville. It’s there that the Commodores lost by four in February when then-freshman Jordan Wright poured in 23 points.

It will be the 200th meeting between the Volunteers and Commodores with Tennessee having won the previous six. Reversing that trend will be key for a Vandy team that faces three road games in a four-game stretch to start January.

Tennessee will come to Nashville on Feb. 24.

Auburn made an impressive run to the Final Four in 2019 and the Tigers were expected to be a postseason threat earlier this year before the COVID-19 pandemic halted the remainder of the 2020 campaign. With a good number of returners back and a highly-touted recruiting class, coach Bruce Pearl’s squad is poised to be a title contender once again.

The matchup also represents the first of four February home games (Auburn, Kentucky, Tennessee, Ole Miss) against some of the SEC’s best. Vandy would like nothing more to knock off the Tigers after a four-point loss in January that also signaled the end of star Aaron Nesmith’s Vanderbilt career due to injury.

Vanderbilt ends the conference season with a trip Baton Rouge, Louisiana, to face LSU. Vandy’s most-memorable game of the 2019-20 season was a record-setting, 99-90 win over a ranked-Tigers team at Memorial Gymnasium in February.

The Commodores will need another strong performance against an LSU team many consider one of the better units going into 2020-21. The regular-season finale is also always important for setting the stage for the postseason. 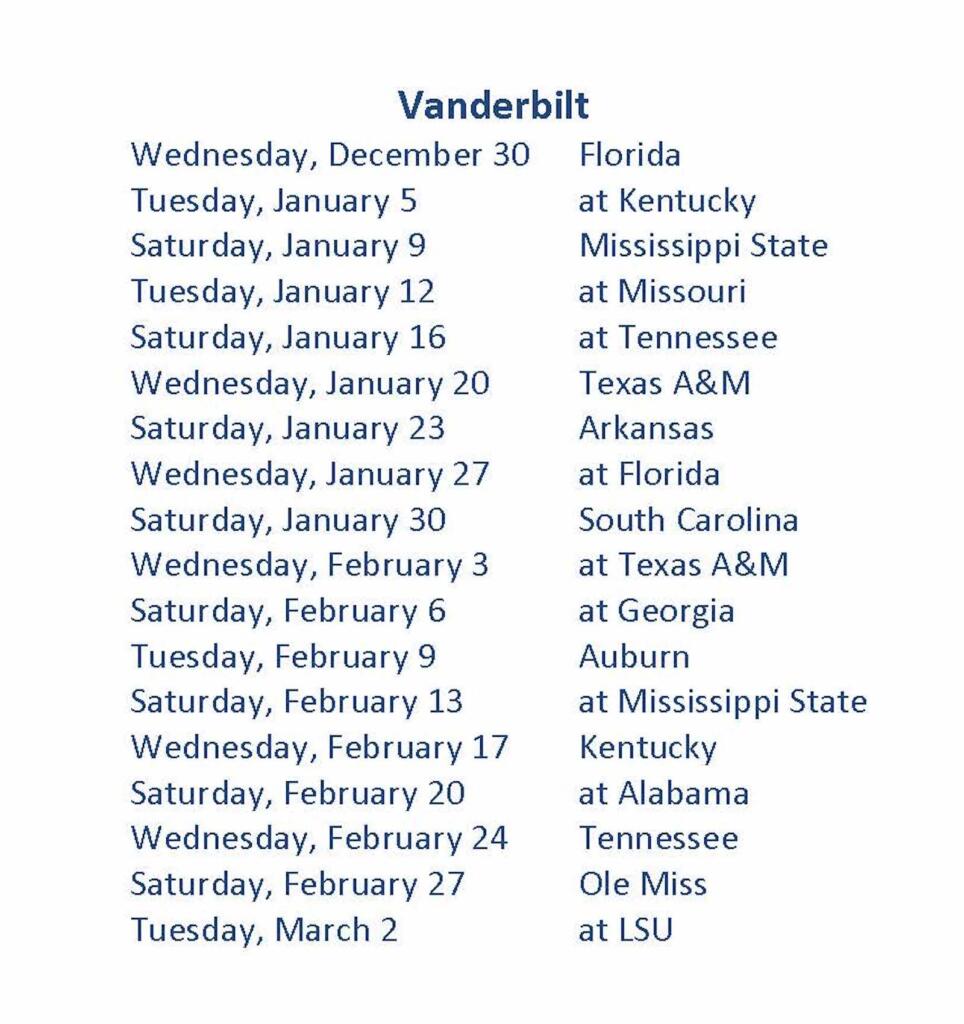