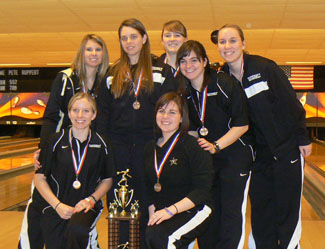 READING, Pa. — Vanderbilt finished third at the Kutztown Invitational Sunday, running into a buzz saw in the day’s first game but turning the tables in the consolation championship match in the process.

The Commodores, who had led nearly wire-to-wire during two days of pin count, were soundly beaten in the first Baker bracket game by Maryland-Eastern Shore, 4-0 in the best of seven. The winning Hawks posted three scores over 231 in the process.

Vanderbilt ended its day by setting a school record for a 5-game Baker series, totaling 1,199 pins in beating a feisty Kutztown team determined to shine in its own tournament. Four of the five VU games in this match were over 222 with a 278 leading the way.

In-between extremes, Vanderbilt was beaten by eventual tourney champion Fairleigh Dickinson, 4-2, in a match that was more competitive. FDU rallied to beat UMES, 4-2 in the title game.

“I guess it shows how things can change in three weeks,” said Coach John Williamson. “We began the month in Arkansas after a dismal fall and bowled so well in three tournaments that we are returning to Nashville disappointed with a third-place finish and 11-4 record in a very good tournament.”

Williamson said it was obvious that Maryland-Eastern Shore was “lights out” in the morning’s first game but thought his own team’s mistakes didn’t help matters. For instance, Vanderbilt had an 18-pin lead in the ninth frame of one game but an open cracked the door for UMES’ anchor to double and pull out a three-pin win.

Jessica Earnest and Brittni Hamilton were named to the All-Tournament team based upon their top five finishes in Saturday’s individual competition.

Commodore anchor Samantha Hesley wanted to recognize two others in the lineup that bowled well.

“Kayla (Rhoades) and Amanda (Halter) both did very well today,” Hesley noted. “Kayla was effective in the lead-off role and Amanda was always there to close a frame when we needed it.”

After three straight weeks of tournaments, Vanderbilt takes next week off before returning Feb. 11 for the Capitol Classic in Dover, Del.