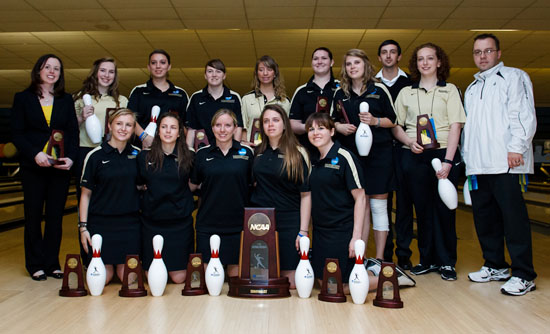 WICKLIFFE, Ohio — This was not how it was supposed to end.

If this were Hollywood, the good guys would ride off into the sunset after a titanic struggle to enjoy the rest of their lives. However, this is Cleveland and after the mighty battle, Vanderbilt came up on the short end of a high caliber 4-3 game and watched Fairleigh Dickinson advance in the NCAA Bowling Championship semifinal.

And when it was over, unable to hang onto a 3-2 advantage after bowling so magnificently, there were tears, some from team members and others from an admiring fan base that knew the sacrifices these Commodores have made over the years to even be here. That knowledge made it tough to swallow, literally and figuratively.

Vanderbilt didn’t lose the game; Fairleigh Dickinson won it with six scores over 200 and four north of 220. The Black and Gold didn’t go softly into the night, over the first five games Vandy’s scores were 234-229-225-212-236 – winning numbers on most days but not today.

The first game, as innocent as it may have seemed at the time, could have been the most critical to Vanderbilt’s final fate. The `Dores came out on fire with five strikes in a row but one glitch cracked the door for the opportunistic Knights to barge through and in a photo finish, FDU prevailed by two pins.

That whisker-length setback became a bigger deal after Vandy followed up with two powerful victories, the second game using four strikes in a row and bowling “clean” and stringing five in a row in the third game to win with some breathing room. Had that first game tipped in VU’s favor it would probably have held a 3-0 margin and FDU would have been in a deep hole. But if Napoleon had nuclear weapons he would have conquered Europe. 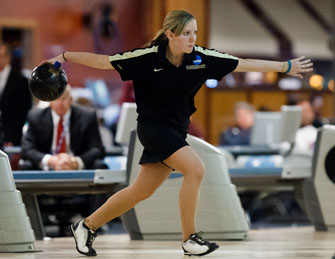 Fairleigh Dickinson got its groove going big-time at this point, throwing 11 strikes in 12 rolls for an almost unbeatable 279 to knot the score at two games each. The fifth game looked bleak from the bleachers when FDU continued its strike binge, starting with six more in a row (17 out of its last 18 frames were bulls-eyes).

This is where the competitive heart of the Commodores clearly showed. Instead of folding, Vandy roared back with a five-bagger of its own and when FDU had a hiccup, VU took advantage and won 236-231.

It was now 3 games to 2 but Vanderbilt would struggle with its only two sub-200 games of the contest in the sixth and deciding seventh and was left to consider what might have been.

Nobody needed to ponder the splendid performance of Sarah O’Brien, who continued her role as a strike machine and was the epitome of the sporting competitor. With no open frames and but a scant few spares, O’Brien is truly someone that relishes the big stage and covets its big prize. The all-tournament team will not be named until long after this column is posted but she is certain to be a member unless it’s possible for someone to stuff the ballot box.

The third-place team finish was a team effort. Freshman Natalie Goodman and junior Jessica Earnest continued their strong play and give Commodore fans something special to look forward to next year. But right now it’s way too early to consider next year.

Two tremendous seniors will be missed, Brittni Hamilton and Samantha Hesley. They leave with a bundle of individual awards and while Sam was just a part of the program for two years, both made important contributions to the tradition of Vanderbilt bowling.

Britt is not certain of her exact future plans but the New Yorker no doubt will hang onto her bowling career in some fashion. Hesley came to Vanderbilt primarily for its academics and while she had a burning desire to win on the lanes, she will graduate a career winner as she announced earlier this week she was accepted into Michigan State’s School of Law.

One-by-one as their names were called to receive their semifinalist trophies, the Commodores lined up in single file, then broke into rows for the customary team photograph. As this was occurring, Vanderbilt fans stood and began the special staccato clap whose beat is well known to Vandy people…. clap-clap…clap…clap-clap, a thank you for a job well done.

The spirit of the fans mirrored the unbreakable spirit of this unforgettable team of diverse personalities; a group assembled from across the United States that came together to form a heart that beat as one. They close as winners in every important way.