NASHVILLE, Tenn. — Keith Roberts, BE’66, has been such a fixture at Vanderbilt Stadium over the last 66 years that two of his favorite memories of the place don’t even involve Commodore football. 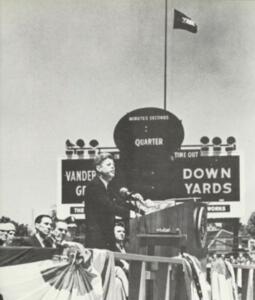 His first trip to the stadium came in 1954 when as a kid he attended a Billy Graham Crusade event with his family, the first stadium event held under lights.

Nine years later, as a member of the Vanderbilt band, he sat a few yards from John F. Kennedy when the President spoke on the field to celebrate the university’s 90th anniversary.

Today, even in retirement after a successful career in the restaurant and health care industries, Roberts still can be found spending time at Vanderbilt Stadium.

On top of it, actually.

As a service to the Spirit of Gold band that meant so much during his college experience, Roberts volunteers to shoot video recordings of every band performance, standing atop the stadium at home games (and traveling to road games) to capture the best view of the band’s pre-game and halftime formations.

It’s a job he’s performed for decades, going back to 1993 when a fellow church parishioner, former Vanderbilt band director Dwayne Sagan, asked if he’d help out. There was no question Roberts would oblige.

At his home in Brentwood, Roberts says his Vandy room is full of Black and Gold memorabilia – everything from Vanderbilt light switches to banners, posters, caps, bobble heads and press box credentials. There would be more had he not given away two grocery bags full of Commodore items to a family at church.

He says he’s listened to, watched on television or attended every Vanderbilt bowl game in history, starting with the 1955 Gator Bowl which he listened to on the radio.

A seventh-generation Nashvillian, Roberts grew up in a family of Vanderbilt fans.

His father, a 1939 Vanderbilt graduate, had grown up selling programs at Commodore games in the 1920s and 30s at times earning a quarter a game. After graduating from Hillsboro High School, where he played basketball and ran track, Roberts applied to just one college, following in his father and older brother McKenzie’s footsteps.

“If I hadn’t gotten accepted to Vandy,” he said, “I don’t know what I would have done.” 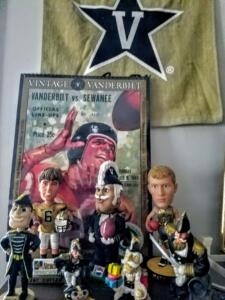 When Roberts arrived on campus in the fall of 1962, he had no plans to join the band like his brother McKenzie, who played the tuba. But Roberts did have a girlfriend at the University of Kentucky.

“My brother told me one day after band practice that they needed more members,” Roberts recalled. “And then he said they were traveling to the homecoming game at the University of Kentucky. I said, ‘Hmm, my girlfriend is up there and this would be a free trip to see her.’

“So, I became a drummer and percussionist.”

That road trip to Lexington sparked a love for the band that continues to this day. He has served as president of the band’s alumni association, acted as a band chaperone on road trips, performed with the basketball band when students are home for the holidays and even invented a game day percussion instrument called a spirit stick.

And all along the way he’s looked for opportunities to share his love for the band with others.

For years, after basketball games at Memorial Gym, Roberts would pick up all the broken drum sticks, take them home and glue, sand and clear-coat them and bring them back to the next home game. He’d give them to any child who showed an interest in the music.

The smiles, and the prospect of creating another lifelong Vanderbilt fan, are the greatest reward Roberts could ask for.