Stackhouse’s empowerment of women in college sports shining through

The Commodores have added Nicki Gross as special assistant to the head coach and Adell Harris as chief of staff. Vanderbilt’s two new staffers come to Nashville with a blend of college and professional basketball experience.

Perry Wallace’s pioneering legacy at Vanderbilt continued with the hiring of Stackhouse, making Vanderbilt the only Power 5 school with an African American director of athletics, head men’s basketball coach and head football coach. Even more, before the additions of Gross and Harris to Stackhouse’s staff, there was only one woman in a non-administrative role currently working in a full-time capacity for any SEC men’s basketball program (Tennessee’s Mary-Carter Eggert is one of only three women currently holding the role of director of operations with a men’s program at a Power 5 school).

Gross arrives having served with Stackhouse in both the NBA and NBA G League. She spent last season as a basketball analyst with the Memphis Grizzlies while Stackhouse was an assistant coach. Prior to that, she became just the third female coach in NBA G League history when she joined the Iowa Energy as an assistant in 2015-16.

The former four-year letterwinner in soccer at Seton Hall got her start in basketball during graduate school at Monmouth. The men’s basketball program, under former Vanderbilt assistant King Rice, later brought her on as a volunteer, which turned into a graduate assistantship.

“The joke was that I just never left the office, so they just kept giving me more responsibilities,” Gross said.

That job led to an internship with the NBA Summer League, which opened more doors. Now Gross will assist Stackhouse’s staff with game planning, film study and comprehensive analytical duties at Vanderbilt.

“I’m excited to continue working with Coach Stackhouse,” Gross said. “I look forward to working and learning from him, and it’s also exciting to be back in the college space and work with student-athletes. I started as a grad manager at Monmouth under King Rice, so that was a Vanderbilt connection. Coach Rice always used to talk about how much he loved Vanderbilt.” 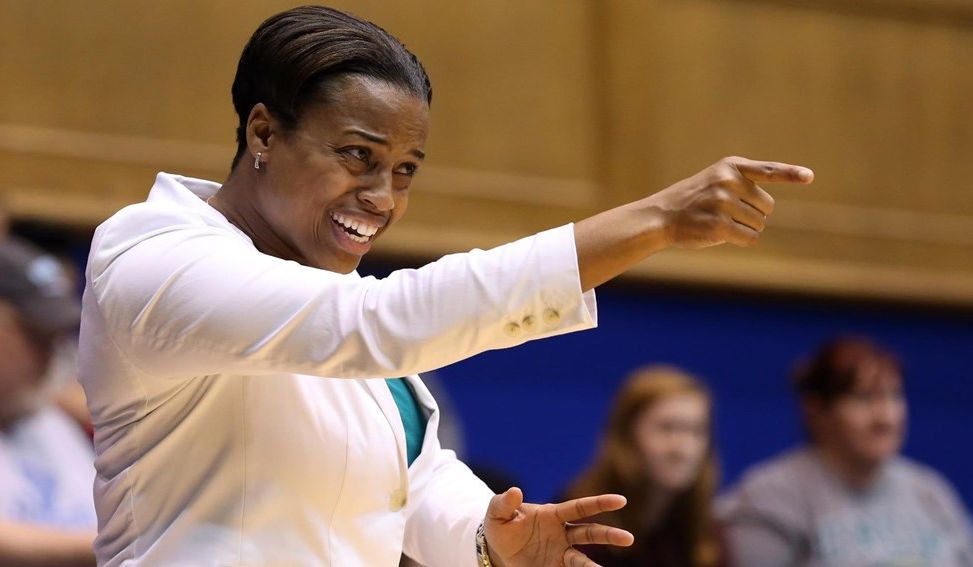 Meanwhile, Harris comes to Vanderbilt following an extensive career in basketball, most notably as UNC Wilmington’s head coach from 2012-17. She was also the head coach at Tusculum from 2009-12, and for the last two years Harris has been head of her own personal empowerment company “Refuse To Lose,” with which the former basketball player at Wake Forest has offered workshops and speeches on personal development.

In her capacity as the chief of staff, Stackhouse will rely on Harris for her strategic counsel, oversight of staff development and the management of all daily operations within his program.

Harris’ connection to Stackhouse came through chance. The High Point, North Carolina, native grew up a basketball fan in the Tar Heel State — “I can tell you exactly where I was when Jerry Stackhouse reversed dunked on Duke,” she jokes — and wrote an E-book last winter called “Dear Assistant Coach.” The book combines ideas, tips and strategies to assistant coaches and originated from a Twitter thread from Harris’ account.

As it happened, Stackhouse had followed along with Harris’ Twitter thread. When the book came out, he bought a copy. Harris sent Stackhouse a message to thank him, and they kept in touch. After Stackhouse landed the Vanderbilt job, Harris was at the NCAA Women’s Basketball Final Four in Tampa when she received a message from the coach.

“I get a reply from him that says, ‘I need my own Wendy Rhoades.” Harris, not initially familiar with the with the television character from the Showtime series Billions, later learned of Rhoades’ multi-faceted and critical role as a fictional company’s star in-house performance coach. Jerry said, ‘I need somebody to come in and be a coach for me and my staff internally. All that stuff you had in your book, I need you to come and teach me and my staff.'”

Both Gross and Harris said they are excited for their new opportunities at Vanderbilt, but they are also aware of the examples they are setting. They are two female staffers who will play pivotal roles within a Power 5 men’s basketball program. That notion holds weight to both Commodore newcomers.

“Since being in the NBA G League and then the NBA, young females have reached out to me, asking how they can get involved with basketball,” Gross said. “People started looking up to me and asking for advice, and I didn’t see anything different about what I was doing. But you’re put on a platform where you’re able to encourage people to go for their dreams. I’ve been fortunate to be in that situation.”

“I can’t ignore the fact that it’s an example and it can create and open up the door for somebody else. You can enlarge other people’s vision of what’s possible. But at the same time, it’s a job. Coach Stackhouse has entrusted these jobs to us. It says a lot about Coach Stackhouse.”