For the first time since 2016, Vanderbilt has three top 100 recruits in same recruiting class by any publication. Kendal Cheesman, De’Mauri Flournoy and Iyana Moore have each signed their letters of intent and are set to join the Commodores on West End in the Fall of 2021.

“We are excited to add Kendal, Iyana and De’Mauri to our young core,” White said. “They are hardworking, like-minded student athletes who embody the core values of Vanderbilt University and will impact our team immediately on both ends of the floor.”

The new trio hails from three different states, including Florida (Cheesman), Georgia (Flournoy) and a local Murfreesboro product (Moore). Each signee has already reached 1,000 career points as they enter their senior seasons, and Prospects Nation has all three in its Top 100 recruits with Flournoy as the 51st-ranked player in the country, Cheesman is 78th and Moore is 84th. 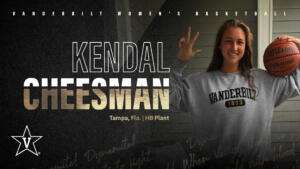 Coach White on Cheesman: “I love the versatility, toughness and work ethic that Kendal brings to our team. She can stretch the floor with her shooting ability and will fit in to our system right away with her versatility.”

Dan Olsen, Collegiate Girls Basketball Report: “Among a select number of players nationwide that were stock-risers by the Collegiate Girls Basketball Report, Cheesman is the prototypical stretch-4, giving Vandy a player with consistent range from beyond the arc. A capable rebounder with soft touch inside the key, Cheesman brings guard skills with size.”

Brandon Clay, Peach State Basketball/Brandon Clay Scouting: “Cheesman has the ability to stretch her range all the way out to the 3-point line forcing opposing defenses to guard her both inside and outside. The future Vanderbilt Commodore has brought a laser-like focus coupled with a leadership vibe that can’t be taught. Her dedication to improvement has been on display over the last year as her game has grown leaps and bounds.” 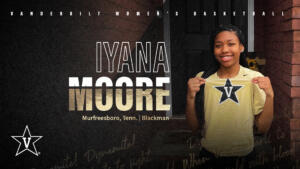 Coach White on Moore: “Iyana is a dynamic guard that can get to the rim, create for herself and for her teammates and stretch the floor. She is also a terrific defender and one of the most competitive kids I’ve seen.”

Dan Olsen, Collegiate Girls Basketball Report: “Athletic combo-guard capable of playing either position in the back court, and consistently knocks down jumpers to the arc. A playmaker, sets the table but, definitely a scorer, one that can beat you from deep or off the dribble.”

Brandon Clay, Peach State Basketball/Brandon Clay Scouting: “Dynamic guards are hard to come by. Fortunately for the Dores, they didn’t have to look far to find Moore who hails from Murfreesboro. Time and time again, Moore showed that she belongs in the conversation when discussing the top guards in the Southeast region, if not the nation. She’s got a smoothness off the bounce that will only be enhanced as she keeps adding consistency and range to her jumper.” 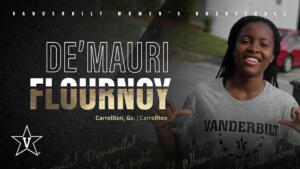 Coach White on Flournoy: “De’Mauri is an outstanding playmaker that can create her own shot at will. Her quickness and ability to get to the paint and create separation make her tough to guard. She brings an enthusiasm and love for the game that will make her a fan favorite right away, as well as a passion and desire to be great.”

Dan Olsen, Collegiate Girls Basketball Report: “Among the speed merchants in the class of 2021, Flournoy is accustomed to the up-tempo, being a thief on defense and converting on the miscues of others. A scorer from deep with a streaky deep ball but, superb in the open court, up-tempo game.”

Brandon Clay, Peach State Basketball/Brandon Clay Scouting: “Flournoy has an innate ability to stick the open 3-pointer or attack to create that will give Stephanie White a true combo-guard. Defensively, Flournoy stood out over the past 12 months with her willingness to be active and make plays. Offensively, she is very much a pace and tempo setter by example for her teammates.”