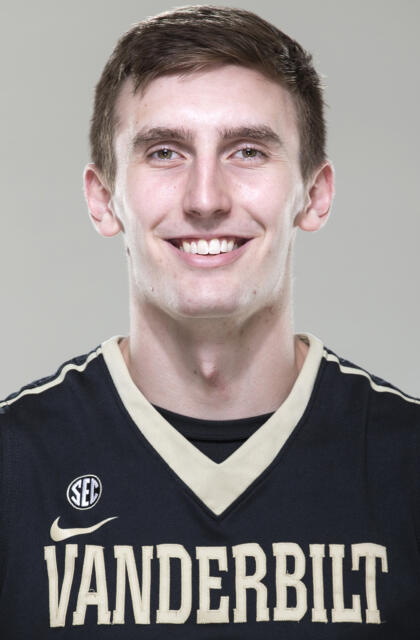 General:
7’1 forward who signed in the late signing period in 2013 with the Commodores…Grew seven inches in his junior and senior seasons in high school and then two more when he arrived on campus…Son of Frank Kornet, a former Vanderbilt basketball standout of his own from 1986-89…Leaves as one of Vanderbilt’s most decorated players, both on and off the court.

2016-17 (Senior):
Played and started in all 35 games…Averaged 13.2 points, 6.2 rebounds, and 2.0 blocks per game…Leaves Vanderbilt as the program’s all-time leader in blocks with 210…Named as a second-team Academic All-American by CoSida, only the fifth Commodore player to be honored on either the first or second team…Named the SEC Scholar Athlete of the Year and a first-team All-SEC selection by the league’s coaches…Also named to the SEC All-Defensive Team for the second consecutive season…All-time NCAA career leader in three’s made by a seven-footer with 150…Became Vanderbilt’s 45th 1,000-point scorer with 11 points against Missouri…Scored in double figures in 26 games in 2016-17 and had seven games in which he made three threes or more…Tied a career high with 24 points in win over Florida on Senior Day…Tallied 20 points against Belmont, 21 vs. Iowa State, and 21 at Kentucky…Blocked a season-high seven shots in win at Tennessee…Posted five double-doubles this season and ended his career with 10 double-doubles.

2015-16 (Junior):
Played in 28 games and made 25 starts in 2015-16…Averaged 8.9 points, 7.3 rebounds, and 3.0 blocks per game…Named to All-SEC Defensive Team…Scored in double figures in 11 games and had four or more blocks in 12 contests…Scored a season-high 20 points at Ole Miss…Made season-high four threes in win over Texas A&M in Nashville…Fourth in the nation in blocked shots, averaging 3.0 blocks per game.  He is fifth in the program’s history in career blocks per game (1.49) and is fourth in total blocks (139)…In a single season, Kornet’s 84 blocks ranks second in program history, and his 3.0 average is the best in a single season…Notched the program’s second triple double with 11 points, 11 rebounds, and 10 blocks vs. Auburn.  It was the program’s first triple-double with blocks.  Brad Tinsley had the other triple double when he registered 11 points, 10 rebounds, and 10 assists in a win over Presbyterian on November 12, 2010…The 10 blocks set a new Vanderbilt program single-game record – the previous best was seven by Will Perdue (vs. East Carolina, 12/28/87), Festus Ezeli (at Georgia, 2/16/11) and Damian Jones (at South Carolina, 2/13/14)…Averaged 11.7 ppg in three games in Maui – scored 14 points vs. Kansas with four blocks.

2014-15 (Sophomore):
Played in 35 games and made 14 starts…Averaged 8.7 points, 3.4 rebounds, and 1.1 blocks per game…Scored in double figures in 18 games and made three or more three’s in six contests…Shot 40% from three and made 50 threes…Scored career-high 24 points on 10-11 shooting vs. Tennessee State… He tied the Memorial Gym record for FG% held by Jeffrey Taylor, who was also 10-11 from the floor vs. Tennessee State on December 19, 2009…Posted first career double-double vs. Trevecca (10 points, career-high 10 rebounds.); also had career-best four blocks…Also blocked four shots against South Dakota State in NIT Second Round…Tied a career high with 10 rebounds vs. Auburn…Made a career-high five threes in win at Tennessee…Made four threes vs. Rutgers…Had a career-high four assists on three occasions.

Personal:
Luke Francis Kornet…July 15, 1995…Son of Frank and Tracy Kornet…Both parents attended Vanderbilt…Has one brother, John (22) and one sister, Nicole (20)…Majoring in computer science and mathematics…Recipient of the R. Dean and Virginia L. Wilkinson Scholarship and the George and Helen Miller Memorial Scholarship…Advice to youngsters: “Your life is a gift from God, so do everything possible to give back to Him.”