Postseason Pins Up Next 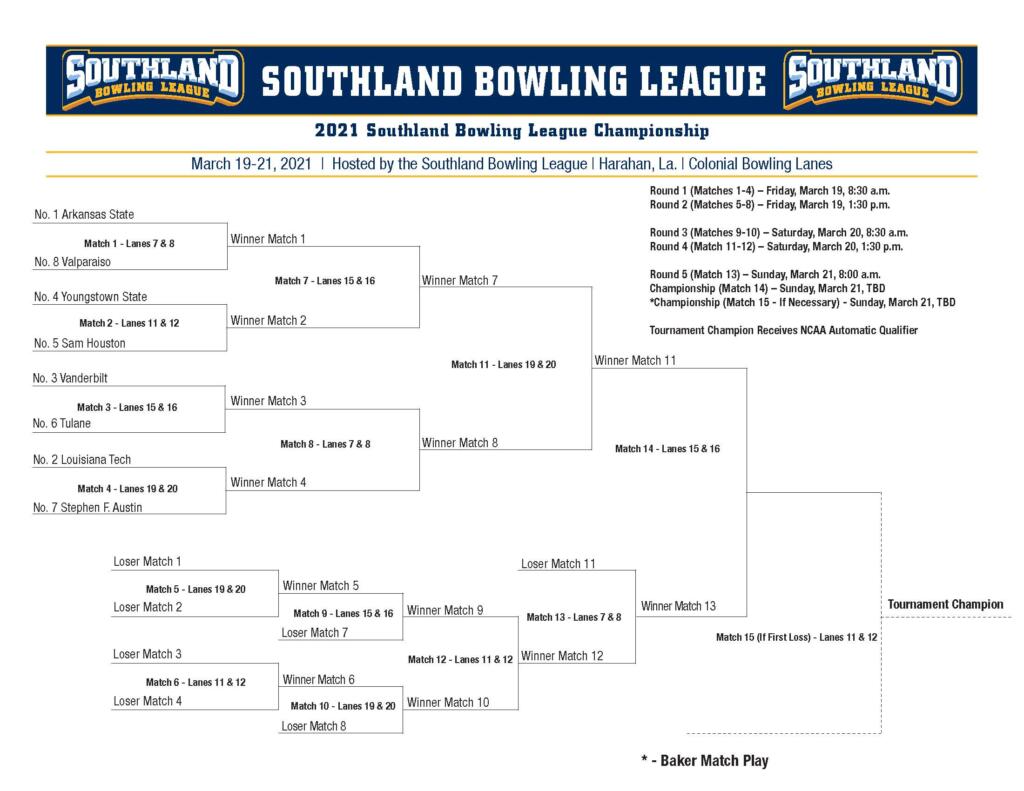 Here is more information on the postseason event which starts Friday:

No. 3 Seed: Vanderbilt earned the No. 3 seed and plays Tulane on Friday when the Southland Bowling League Championship begins at the Colonial Lanes in Harahan, Louisiana.

Tournament format differs from regular season: The SBL is a double-elimination tournament using a best-of-three match format commonly called a mega-match. This is the system used at the NCAA Championship. It is not how the regular season matches were determined.

Teams will first play a traditional team game followed by a 5-game, total pin Baker game. Should one team win both, the match is over. If they split, a best-of-seven Baker is played to determine the winner.

Championship website: Southland.org has a link to the tournament bracket, scores and other information. For those wanting complete information click HERE.

Follow from afar: InsideBowling.com will live stream the tournament. Vanderbilt’s YouTube streaming sites will cover all Vandy matches not covered by Inside Bowling. As has been the case all season, spectators will not permitted at the event.

Prior SBL championships: The pandemic canceled last year’s championship days before it was to begin. Vandy and Arkansas State have won the league championship twice. Vanderbilt won the first tournament in 2015 and again in 2017 while ASU won in 2016 and 2018. Sam Houston edged out Vanderbilt in the 2019 final.

A powerful league: The Southland Bowling League is generally regarded as the nation’s best. All eight league teams were ranked among the top 25 in the latest NTCA poll. Vanderbilt, carrying a 36-25 record, was rated third while Tulane was 17th. The league has won four national championships in its seven years of existence. Vanderbilt and Stephen F. Austin have both won the nationals twice while Sam Houston won it once. One of Vandy’s NCAA titles came prior to the formation of the SBL.

Automatic qualification: The winner of this tournament and five other qualified conferences will be automatic qualifiers. The NCAA will then make 10 at-large selections. The entire championship field will be announced by the NCAA Committee on March 31 via live stream on NCAA.com.