Inside the active mind and busy schedule of Mabel Cummins

NASHVILLE, Tenn. — Perhaps all one needs to know about what makes Mabel Cummins tick is to watch her in the kitchen.

“If you ask anyone, I’m a very healthy eater – that’s been engrained in me,” said the former U.S. Amateur runner-up and Junior Team USA star, now a sophomore at Vanderbilt. “I’m very health-driven. When I’m home I cook most of the meals for my parents so I know what’s going into the food – some foods have a lot of calories such as oil and sauce. I want to know what’s going into my body.”

Indeed. Cummins approaches eating – and life – with the same care, caution and expertise as a scientist balancing a delicate formula in the lab.

“I strive to do everything at the highest level or to the best of my ability,” Cummins admitted. “Whether it’s bowling or school or working out or cooking food, all of these factors play into my success.” 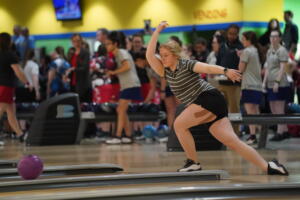 When it comes to nutrition, her preferences veer far from that of the typical college junk food addict. She’s a big fan of salads – spinach, kale and arugula for example and she’s recently discovered a plant-based noodle (shirataki) that is tasty.

While most college bowlers enjoy traditional big breakfasts of pancakes, eggs, sausage and such, Cummins catches attention by hauling out a special oatmeal packet that she brings on every trip.

“I love my oatmeal with some protein powder,” said the neuroscience major that cracked the Vanderbilt Dean’s List last semester. “It’s good for you as a long-term energy source.”

Cummins is self-driven, regardless of the topic. Type B sorts might call her obsessed.

“My typical day is very busy. I get up at 5:30 or 6 depending on the day. I go workout for two hours – often on a winding four or five mile run around campus – and then go do our team workouts. I do my own workouts on the days our team is off.”

Cummins’ fall term was dedicated to setting herself up to becoming a pathologist – doctors that study causes and effects of disease. 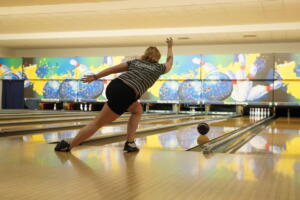 Realizing that admission into medical school is highly competitive, Cummins wanted to get as much hands-on experience as possible so during the summer she qualified to become an emergency medical technician. She hopes to work at a local hospital in that capacity this summer.

A big chuck of Cummins’ time last fall was as a research assistant to a doctoral student in the School of Nursing, collecting data for her dissertation. That involved calling every primary care office in the United States to ask if they will complete a questionnaire.

She said always has her eye on the next step and sees athletics and the lessons it teaches as an advantage.

“Having that athletic mindset in the interview process is important,” she said. “Handling emotions under pressure. There is a difference between being an athlete and applying for school but being an athlete has given me those underlying traits of discipline, accountability and organization that are necessary to succeed.”

One might imagine that with so much attention directed to medicine that bowling on an elite level might suffer. The Illinois native – who’s family moved to the Nashville area after Cummins chose to compete for Vanderbilt – earned honorable mention All-America honors last season and was universally considered among the top two or three freshmen nationally.

“I have learned to be very organized, to down-play it,” she sad. “I don’t really waste a lot of time because I have a lot of things I need to get done. That’s why my schedule is quite a bit busier than almost anyone else unless they are also a student-athlete. I have always been busy – training, bowling and active in clubs while I was in high school.”

Busy she is. A writer waited well over a week for Mabel to clear out a 20-minute time block to visit. But it could be worth the wait, especially if you’d happen to get the chance to sit down and snack while you talk.