Dores in 22nd after day one 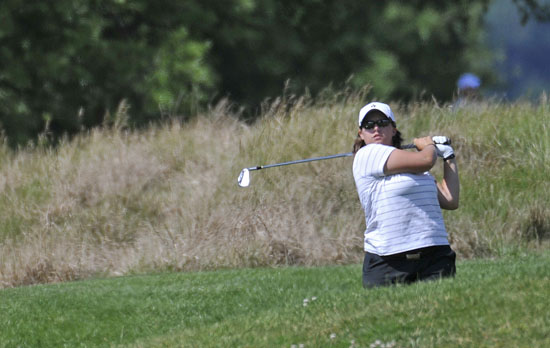 FRANKLIN, Tenn. – Hosting the NCAA Division I Women’s Golf Championship at the Vanderbilt Legends Club, the Vanderbilt women’s golf team struggled to defend its home turf during the first round and finds itself tied for 22nd place after shooting an 18-over 306.

Senior Marina Alex, SEC Player of the Year and one of the contenders for the individual title entering the week, steadied herself after an early triple bogey. Following three pars to open the day, Alex carded a seven on the par-four fourth hole. She followed that with seven-straight pars before struggling to close the round. Alex made four bogies, to go with two birdies, over the final seven holes, to finish with a five-over 77.

Lauren Stratton used a pair of bogies and a pair of birdies to stay at even par at the turn. Stratton then struggled on the backside, making four bogies to go with a birdie en route to a round of 75 (+3).

Like Stratton, Kendall Martindale was even through the front nine before making four bogies and a birdie on the back nine to match Stratton’s three-over par 75. She saved the 75 with a birdie on the par-five 18th.

Rene Sobolewski also struggled on the back nine. After making the turn at just two-over par, the sophomore made three bogeys and a double-bogey on the backside to finish at seven-over par (79).

Anna Leigh Keith was the high-scorer for Vanderbilt on the day, with her 80 (+8) not counting towards the team score.

Vanderbilt Head Coach Greg Allen was well aware that most of the struggles came on the back nine.

“Two of our kids made the turn at even, but my goodness, I don’t know what happened on the back nine,” Allen said. “A lot of bogies and a lot of three putts.”

He felt the most frustrating part was not necessarily that the Commodores struggled, but the mental approach.

“I’m probably more disappointed in our body language than anything,” Allen continued. “The way we were walking around, that’s something we can control. You’re going to miss shots and miss putts, but they way you handle yourself out there is something we talked about (before the round).”

He hopes the lesson will be learned when the Commodores return tomorrow morning, with 54 holes of golf still in front of them.

“I told them to get mad or whatever they need to do,” Allen said. “We’ve got a lot of work to do.”

The Commodores are tied for 22nd with Pepperdine. Individually, Stratton and Martindale find themselves tied for 47th, while Alex is tied for 85th.

Alabama holds the team lead after day one, shooting a two-under 286. The Tide was led by a four-under par 68 from Tennessee native Brooke Pancake. They lead Virginia by two strokes.

The Cavaliers used a 66 from Portland Rosen to overcome a disqualification by Elizabeth Brightwell for signing an incorrect scorecard to end up at even par (288) as a team.

Rosen is atop the individual leaderboard with the six-under 66, which is just one stroke off the women’s collegiate course record. She is one stroke up on Purdue’s Laura Gonzalez, who shot a five-under 67, and two up on North Carolina’s Catherine O’Donnell and Brooke Pancake.

Action resumes on Wednesday, May 23, with the first tee times at 7:30 a.m. The Commodores will again be joined by Texas A&M and LSU, this time starting on the 10th tee at 8:28 a.m.