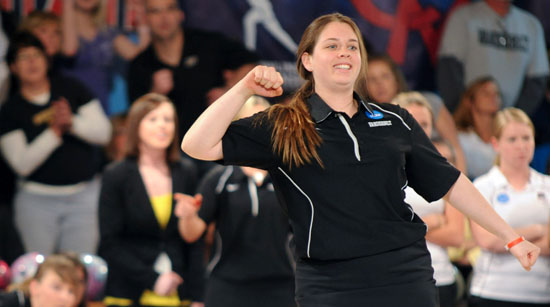 ARLINGTON, Texas – Vanderbilt won its third team championship of the season Sunday, stopping Maryland-Eastern Shore at the Prairie View Invitational in a riveting battle that was live streamed internationally.

The best-of-four championship was a heavyweight struggle with both teams showing the ability to take a figurative punch, get off the floor and come back strong. When the dust had finally settled on this day, Vanderbilt took the seventh and deciding game, 234-214, after the previous three Bakers were resolved by a scant five pins total.

Vanderbilt, the No. 3 seed in the tourney, reached the championship game by crushing No. 2 seeded Nebraska, 4-0 in the semi-finals while the Hawks brushed past top-seeded Arkansas State on the other side of the bracket.

“It was a very good team effort,” said Coach John Williamson, “considering we didn’t put a single player on the all-tournament team. We had balance. When we needed a shot we pretty much got one. Everyone played a winning role – our three more experienced players, Kim, Natalie.”

Williamson noted afterwards there was an eerie resemblance at one point in today’s finale and last week’s third-place match at Kutztown (a loss to place fourth) with one significant difference.

“Today after we had a chance to go up 3-1,we did a much, much better job responding than last week,” he noted.

It was indeed a battle royal with both teams having their chances to win, only to have the other storm back from the brink of defeat.

The titans split the first two games without a lot of drama and Vanderbilt won Game 3, benefitting from five strikes in its last six balls. The Commodores appeared on the verge of seizing a commanding 3-1 lead when it sputtered at the finish and cracked the door for UMES to win by four pins with just a 167 total.

Game 5 was fiercely contested, the Hawks coming out just two pins ahead (202-200) after the Black and Gold lost a small lead late in the contest. And if Game 5 was wild, Game 6 was simply crazy as neither team would blink; it ended with Vanderbilt getting strikes in the 8th and 9th and going strike-nine-spare to win by a whisker, 214-213. It was the stuff of championships.

Tied three games apiece, UMES snuck out to a small lead in the rubber game but Vanderbilt won the title by calmly throwing seven straight strikes to win by a deceptive 20-pin margin.

Williamson played a rotation of Brittni Hamilton, Natalie Goodman, Kim Carper, Jessica Earnest and Samantha Hesley all the way in the two big games but in the day’s preliminary game he shuffled the lineup order and rotation liberally with Courtney Morgan and Rebeca Reguero getting some quality experience.

On-lookers might say that Hesley earned her scholarship in the title match, facing one pressure situation after the other.

“We are fortunate to have someone with Sam’s talent and competitive instincts as our anchor because when you put two good teams together it is almost always going to be tight at the wire.” Hesley typically deflected any personal attention, noting that her mindset during the match was so firmly fixed upon winning that it almost back-fired in her estimation.

“Everyone did their part and we did a good job of making shots when we needed to,” said the senior from Wellington, Fla.

The hard-fought victory capped an unusual week in which the majority of the team battled through a flu virus that forced the cancellation of the entire week of practice.

The Commodores are idle until Feb. 17 when they reappear in Baltimore at the Morgan State Invitational.