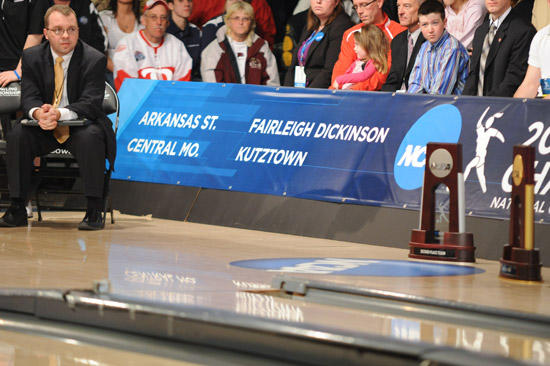 The latest poll of the collegiate bowling coaches illustrates the growing parity among programs and finds Vanderbilt rising one notch into third place after completion of the fall schedule. The December poll by the National Ten Pin Coaches Association saw no less than six programs earn all-time high-water rankings.

The Commodores finished their fall campaign in impressive fashion despite a third-place finish at the Track Kat Klash; they led the tournament by almost 400 pins before being upset by Wisconsin-Whitewater in the semifinals. The `Dores were also third at the Hawk Classic after opening the tournament season with a mediocre fifth-place at Valparaiso.

Central Missouri has long been a national contender with frequent appearances in the NCAA’s Final Four but until this poll, the Jennies have never held the No. 1 national rank. Coach Ron Holmes’ squad received first-place votes from the 23 head coaches participating in the voting after compiling a dominating 41-5 mark that led the nation in both RPI and winning percentage. Central won two tournament championships and was second in a third event.

Maryland-Eastern Shore (30-3) slipped from first to second while Sam Houston State was fourth, achieving its all-time best poll placement after going 45-11 and winning its Track Kat Klash in November.

“This poll reflects what NCAA bowling coaches have known, that the depth and parity in college bowling is the best it has ever been,” says NTCA President Becky Kregling. “Youth programs and high schools are developing outstanding talent, more universities are expending resources and coaches are recruiting this talent like never before in our 10 year history. This is a great sign for NCAA bowling and the future of our sport.”

The next NTCA poll will come in early February after competition resumes in January.