When Allie Scalf came to at Vanderbilt in the fall of 2009, Steve Keith was starting his third season at the helm of the men’s and women’s cross country programs.

After leading Johnson City’s Science Hill High School to Tennessee state titles in cross country and track as a senior, Scalf moved on to a Vanderbilt program that was building from the ground up.

Four years later, freshman Vanessa Valentine came to Vanderbilt to run for the defending SEC Champions (who will look to defend their title on their home course this month) as part of a team that is fully funded.

The simplest way to exhibit the progress of the program is to look at the team’s finishes at the SEC Championships. After finishing eighth out of 12 teams in 2008, the Commodores came in sixth in 2009 and third in 2010 before winning the event last season.

Apart from those numbers, Scalf can provide a first-hand account of the development of the program.

“It’s impressive to see the determination, discipline and focus on the team, when you have four years of everyone being recruited and everyone comes in with the same goals,” the senior said.

The one common thread from that time to now, according to both Scalf and Valentine, is the chemistry built up by each team. The most visible sign of that chemistry can be seen in the hair ribbons the team wears for each race. 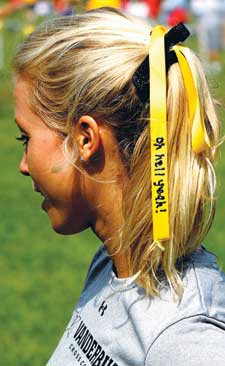 The tradition has its roots in the team’s preseason camp, where last year each runner had “synergy” on one side and a personal word of motivation on the other. This season, senior Liz Anderson made the same ribbon for everyone based on the cheer, “Vandy! Vandy! Oh hell yeah!”

“It shows the hardcore attitude we want to take into every race this season,” Anderson explained.

Scalf also added that some of the graduated athletes from last year handed their ribbons down to other returning team members. She is quick to point out the ribbon itself is not necessarily the most important part.

“When you put that on, it gets you in the zone,” Scalf said. “[They are] words that really get us ready to run and into the race.”

The other important aspect of preseason camp each season is developing trust and a support system for freshmen. The returners make sure all of the new team members know they have people to lean on as they adjust to life as collegiate student-athletes.

With activities ranging from relay races to making s’mores by the campfire, the annual retreat at Natchez Trace State Park helps develop the sense of community that has become so important to the program.

“The whole reason behind the camp is team bonding,” Keith said. “It’s less about training and more about getting comfortable and trying to accelerate the new kids getting to know the team.”

Keith has always emphasized running as a team, making chemistry even more important.

“Our ability to race together has only happened in the last couple of years,” Keith said. “A couple years ago, we started to get within a 20 or 30 second grouping. This past year, we stayed together as a group and got low numbers. The ability of our kids to work out together, be cooperative and be a part of the team is what we try to recruit.”

Valentine was one of the beneficiaries of team camp this season, learning more than she anticipated.

“I thought I knew what teamwork was, what being a good leader was and what hard work was, but really I came here and learned I had no idea,” Valentine says. “The example that the seniors, juniors and sophomores set for the freshmen is unbelievable.”

The combination of hard work and teamwork is exactly what has turned Vanderbilt into a program that is contending on a national level.

“I’ve never seen a team work so hard and have so much fun while doing it,” Valentine added.

Now that the expectations are there, just how has it changed in the four years between Scalf’s freshman season and Valentine’s rookie year?

While she knows the expectations are higher, Valentine is most thankful for the depth of the Commodore roster, which allows her to adjust to college without the need to score low immediately.

“I definitely want to play a role on the team, but they allow us room to be freshmen,” Valentine explained. “At the same time, the freshmen all have the drive and determination to contribute to the team.”

To open the 2012 season, the Commodores won the Belmont Opener and the Commodore Classic at the same Percy Warner Park that will host the SEC Championships on October 26.

If the Commodores can repeat, they will become the first Vanderbilt team to successfully defend an SEC Championship since women’s soccer in 1994. With their top-10 national ranking already solidified during the first part of the season, the Commodores also have their sights set on the NCAA Championships to be held in Louisville on November 17.