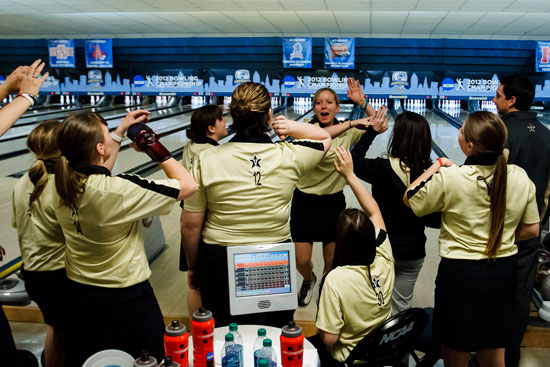 Watch the NCAA Championships live on

WICKLIFFE, Ohio — Vanderbilt turned a perfect afternoon into the No. 1 seed at the NCAA Bowling Championship Thursday. The Commodores face eighth-seeded Valparaiso in Friday’s opening bracket game after posting a 5-2 mark in the round-robin qualifying, one win better than second seeded Nebraska.

While the top seed was a nice reward for a good performance, Vanderbilt Coach John Williamson hoisted a quick caution flag after the brackets were set.

“It will be good to have lane choice should that become a factor,” Williamson said, “but that is the only guarantee the top seed holds. If you look at tournament history the No. 1 seeds have not necessarily fared well. Our primary goal today was to get settled in and leave with confidence and we accomplished that goal. The seed is an added bonus.”

During the course of the marathon day – over 10 hours from team introductions until the last frame was complete – the Commodores defeated the No. 1 rated team (Arkansas State), the No. 2 rated team (Fairleigh Dickinson) and the No. 5 team (Maryland-Eastern Shore).

“I was very pleased with our balance and overall consistency,” Williamson said, “and especially when we were able to bowl everyone at least two games. Everyone had their moments, everyone contributed. We had fun competing and that is something I really liked. I felt we were able to accomplish some things without a lot of mental grinding.”

“I thought we were quietly competing,” anchor Samantha Hesley suggested. “We were definitely concentrating and our consistency was forcing other teams to make shots. And it felt to me as though we did a good job converting spares.”

“We wanted to have fun out there,” she said. “We weren’t stressing too much about winning matches as our focus was on getting comfortable. It was a good day because everyone had some big shots.”

The top seed was the first ever notched by Vanderbilt in seven prior tries. It earned a 2-seed once and was seeded third when it won this tournament back in 2007.

The balance Williamson referred to was evident throughout the day. Vandy began with a rotation of Hamilton, Sarah O’Brien, Nicole Mosesso, Earnest and Hesley. After two games, the `Dores inserted Courtney Morgan and Rebeca Reguero in at the 2 and 3 spots and to start the successful afternoon Natalie Goodman and Kim Carper got the nod.

The last game of the day saw Vandy use Hamilton, O’Brien, Carper, Earnest and Hesley but Williamson says he is not sure how the lineup will look for the next game.

“I feel we have a number of good options and before this tournament is over I expect we’ll have the opportunity to use them. I have liked the fact that when we substituted we kept or increased our energy and production.”

O’Brien, a junior who has been plagued through her years with two hip surgeries, has been bothered by a sore left knee which has been wrapped the past few days. She expects to have it reexamined next week to determine the source of the pain, although she said afterward that the knee was feeling better.

The winner of the Vanderbilt-Valparaiso game will face the winner of Sacred Heart-Maryland Eastern Shore with the losing teams staring at elimination in the double-elimination event. Sacred Heart topped Vandy in today’s opening game, the only team aside from Nebraska to come out on top against the Commodores.

Sacred Heart 954, VU 933
Vanderbilt opened with a lineup of Hamilton, O’Brien, Mosesso, Earnest and Hesley. Opened seemed to be an operative word, too, as the Commodores seemed plagued by splits and nine open frames against a Pioneer team that was one of the nation’s hottest at year’s end. It was a close game with Vandy trailing through the first half; Sacred Heart took a bigger lead late but although Vanderbilt closed the gap in the 10th, it was too little, too late.

VU 959, Arkansas State 933
Vandy used the same lineup and took down the No. 1 rated Red Wolves in a game that felt much like the opener except the Black and Gold was in control most of the way. The size of the lead varied and it was anyone’s game heading into the last frame.

That 10th proved to be a good one for the `Dores; Hamilton started it with a strike and a spare, O’Brien followed with the same and Mosesso got a needed spare and count. Earnest came through in All-America style with three big strikes and Hesley iced the win with the first of two strikes.

VU 993, Central Missouri 989
This one was interesting and if it had been an elimination game it would have been darn right thrilling. The Commodores inserted Courtney Morgan and Rebeca Reguero into their lineup in the 2 and 3 slots and held a small lead through much of the game. A relatively clean game (reducing its opens in half) boiled down to all even heading into the 10th frame.

Hamilton spared and had 8-count and Morgan closed with a turkey to provide a needed spark. A pivotal moment came in the next rotation as Reguero left a 4-7 split that is sometimes tricky for lefties to convert. The Vandy coaches quickly huddled and then inserted Mosesso into the situation. The freshman from Centerville, Ohio deftly picked up the spare and added nine count. Earnest added a strike and spare for a nifty 224, all the while Central was doing its part to win. Four measly pins were the difference here.

Nebraska 1,009 VU 962
The Big Red started the game as the only unbeaten team in the field and unfortunately for Vandy, ended the game the same way. The Commodores didn’t have their “A” game in gear but kept in eyesight throughout. Hamilton’s consistency is something else; she posted a 203 in this game – her fourth score of the day within seven pins of each other!

It’s been quite a demonstration in parity, too. While the Huskers are 4-0, No. 1 rated Arkansas State is the only team yet to win a game while the other six teams are 2-2. The Commodores have not yet been on fire but to most observers, they appear composed and confident as they prepare for the late afternoon’s three final qualifying matches.

VU 1,018, Fairleigh Dickinson 933
Vanderbilt broke open a tight battle using good balance and a strong couple of frames to defeat the No. 2 rated Knights. The Commodores continued rotating their 2 and 3 spots after every two games, now using Goodman and Carper with effectiveness.

It was essentially even after seven frames and VU had a scant 10-pin margin into the 9th. Hamilton closed strike in the 9th and added two more in the 10th for a machine-like 208. Goodman matched that exactly for an excellent 216 and Carper went strike-spare. By this time there were cracks in the FDU score sheet so Earnest’s strike-spare-strike and Hesley’s close were icing on the cake. Four `Dores were north of 200 and all made it look very steady.

VU 1,013, Maryland Eastern Shore 936
Vanderbilt went over 1,000 again, topping the Hawks with relative ease after leading by over 50 pins much of the game. Hamilton got the front five to jump start the assault and closed with another five as the happy Commodore fans chanted “Yatzee!” each time.

Hamilton’s steady string of games between 203 and 209 was happily snapped with a spiffy 256 while Carper’s 224 was also impressive.

VU 1,020 Valparaiso 982
The Commodores had just three open frames, their cleanest work of the day, and converted two splits as they dispatched Valparaiso and won the tournament’s No. 1 seed in the process.

Vandy led by margins of 25-40 pins throughout much of the game against the feisty Crusaders, who’s 982 score would have normally be enough to win many matches. Once again it was a balanced attack as Hesley – boosted by a string of six strikes, led the way with a 235.