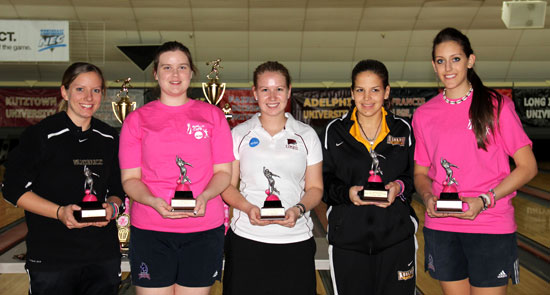 ELMWOOD PARK, N.J. – Despite its runner-up finish at the New Jersey Jamboree attended by a dozen nationally ranked programs, Vanderbilt’s bowling team left here realizing there is much improvement to be made during the lengthy season ahead.

The No. 2 rated Commodores lost the title game to host Fairleigh Dickinson, 4 Â½ – 1 Â½ after having beaten the Knights in the semi-finals be a 4-game to 1 margin. Neither the win in the semis or the loss in the finals were anything close to resembling mid-season form.

“We were sloppy in the semi-finals but were able to advance because FDU struggled even more,” said Coach John Williamson, “and in the finals we made too many mistakes to defeat an opponent as talented as FDU. They deserved to win here. We have a lot of work to do when we get home.” 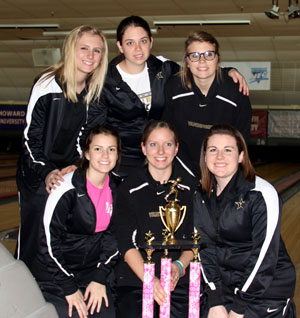 Vanderbilt All-American Brittni Hamilton won the individual championship by a wide margin in competition that was conducted Saturday but just announced Sunday. Her 220.20 average over five games was nearly four pins better than second place Danielle McEwan of FDU. VU’s Samantha Hesley was ninth (206.60) and Jessica Earnest tenth (206.40) in the field of 119 competitors.

Using a Baker lineup of Hamilton, Sarah O’Brien, Natalie Goodman, Earnest and Hesley in the championship match, the `Dores never got into a rhythm on the lanes that the opposing coaches both described as “difficult.”

Despite their battle with splits and open frames (VU had four, 3-10 splits in the first 19 frames), the Commodores were able to keep it close, primarily because neither team was posting big numbers. FDU won by a single pin in the first game when Hesley rolled two strikes but was unable to make it three.

Vanderbilt’s win in game 3 came with the aid of four Knight opens (one more than Vanderbilt) with an undistinguished 163-159 margin.

A high spot for the Black and Gold came in game 4 when FDU seemed in command until a pair of open frames in the sixth and seventh cracked the door for Vandy. Hesley was rock solid in striking out to salvage a draw.

Game 5 was the highest quality of the day with the hosts edging VU by seven pins, 224-217, after the game was tied going into the tenth. McEwan’s first-ball strike was the difference.

Vanderbilt gets back into action Nov. 18-20 at Maryland-Eastern Shore’s Hawk Classic.