Yu, from Orlando, Florida, is Vanderbilt’s initial class of 2024 signee. 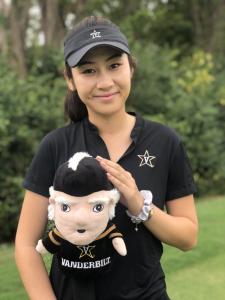 Vanderbilt head coach Greg Allen is pleased to add the highly regarded Yu to his roster on West End.

“Ariel is a very bright student, and an accomplished player who has competed successfully at the highest level of junior golf in this country,” Allen said. “She brings a strong work ethic and great personality to our team. We’re so excited that Ariel chose Vanderbilt.”

Yu distinguished herself quickly at The First Academy, helping the school to Florida 1A team titles in 2017 and 2018 and a pair of runner-up finishes. In 2017, Yu swept state medalist honors after firing back-to-back rounds of 5-under 67 and 7-under 65.

Yu has captured four American Junior Golf Association (AJGA) tournaments, including the 2019 Arnold Palmer Invitational Junior near Orlando when she won after forcing a playoff with a final-round 67. She owns an AJGA competitive stroke average of 73.39.