Vanderbilt Stadium, an intimate 40,350-seat facility located in the heart of campus, has been the Commodores’ home since 1981. The Commodores began playing home games at the current location in 1922. Dudley Field, as it was named, was the first stadium in the South to be erected exclusively for college football.

Vanderbilt dedicated its new stadium October 14, 1922, with a game for the ages. The Michigan Wolverines, a national power even in those days, came to Nashville as heavy favorites. The Commodores battled to a 0-0 tie, giving every one of the 20,000-plus fans in attendance a memory to cherish.

The game was played in a carnival-like atmosphere, with the game ball being dropped from an airplane. Vanderbilt’s most momentous defensive stop of the day came as Michigan attempted a fourth-down play on the Commodores’ goal line. A Vanderbilt defender, using one of the goal posts to push off of, stopped the advancing Michigan runner and squelched any hope the Wolverines had of scoring on that day. 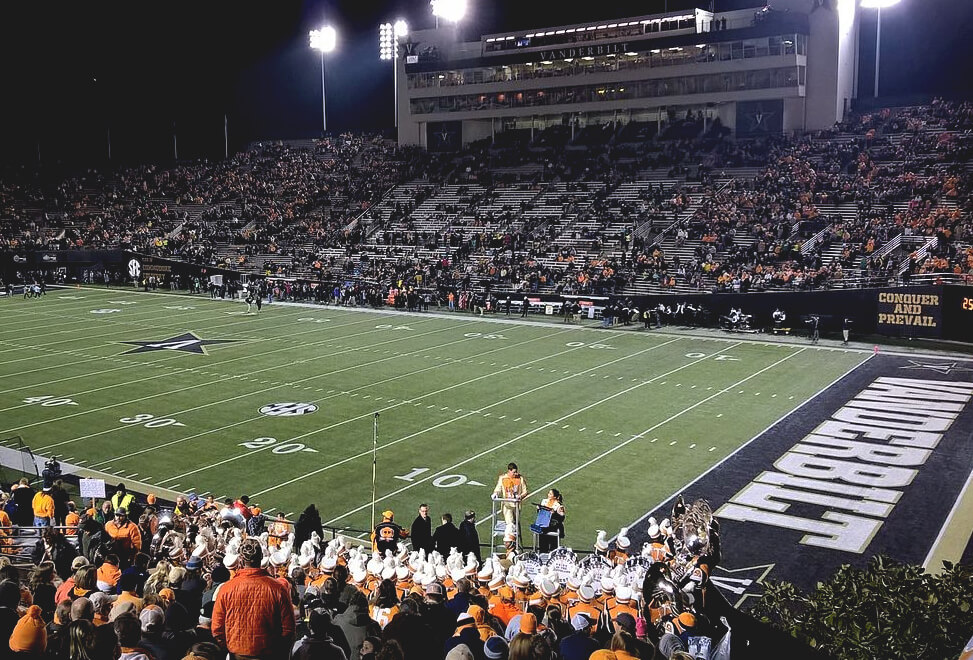 Good play continued as the opening season at Dudley featured a Commodore squad that powered its way to an 8-0-1 season, outscoring its opponents 117-16 overall and surrendering zero points at home.

Before the dedication game, the field was named for Dr. William Dudley, Dean of the Vanderbilt Medical College from 1885 until his death in 1914. Dr. Dudley was the outstanding academic leader of his day and one of football’s foremost national leaders. 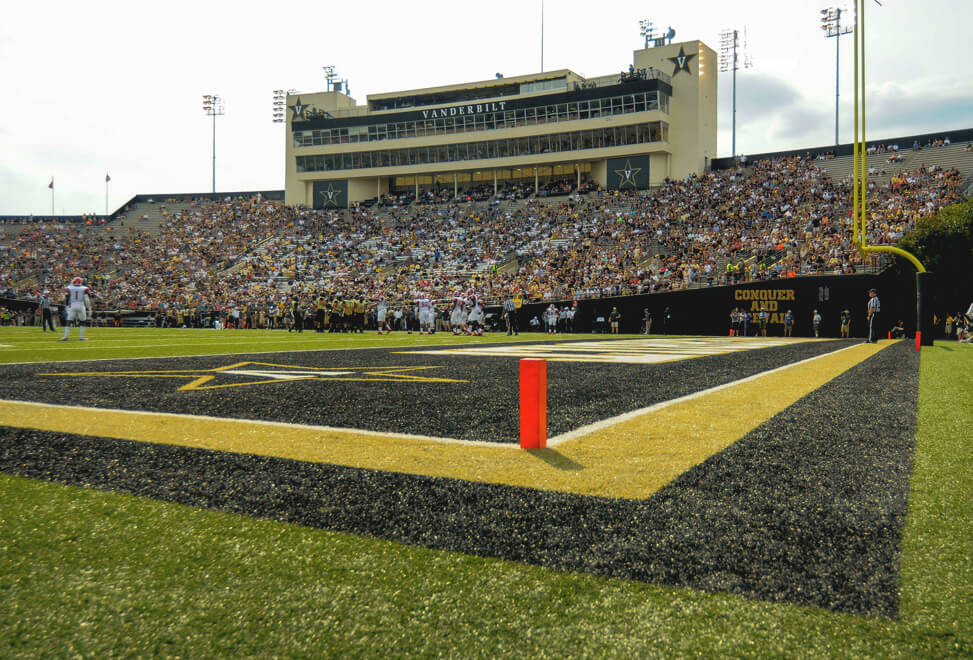 The Banner, the conservative afternoon newspaper, wasn't inclined to exaggerate on Kennedy's behalf, so when it published an estimate of 150,000 spectators along the streets, plus the 5,000 or so at the airport and 33,000 in Vanderbilt Stadium, the staggering number were all that more believable. Nashville's population in 1963 was 400,000, meaning that almost half of the city got a glimpse of the president that day."

From Vanderbilt’s pigskin inception in 1892 until 1922, the Commodores competed at Old Dudley Field. After the new stadium was built, Old Dudley was rechristened Curry Field, in honor of Irby (Rabbit) Curry, a standout football player from 1914-16. Curry was killed in World War I while flying a combat mission over France in 1918.

The first night game at Dudley Field took place on September 25, 1954, when Vanderbilt fell to Baylor, 25-19. The lighting system was constructed in the summer of 1954 to facilitate the arrival of the Billy Graham Crusade in Nashville.

After a $10.1 million construction project in 1981, the new home of the Commodores, Vanderbilt Stadium, was dedicated in September as Vanderbilt posted a comeback victory, beating heavily Maryland, 23-17.

The 41,000-seat stadium was completed within a span of nine months, an amazing feat considering that Dudley Field had to be, with the exception of metal stands seating 12,088, totally demolished to begin work.

The process began in December of 1980 when a giant steel ball smashed in the concrete stands around the south end zone of Dudley Field.

Perhaps the most spectacular part of the construction process came when the existing steel bleachers, the last vestiges of Dudley Field, were raised some 10 feet through the use of 22 hydraulic jacks. Each set of stands weighed approximately 400 tons. 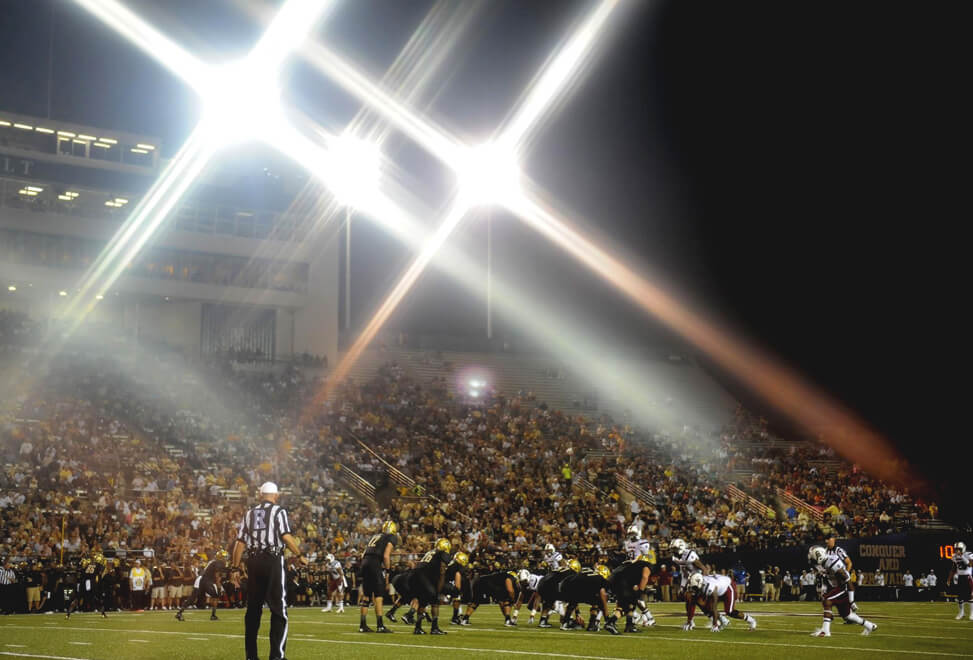 New aluminum bleacher seats had also been installed and a new AstroTurf playing surface placed down, replacing the Tartan Turf surface that was in place since 1970.

Foster and Creighton Co., brought the project in on time at a cost of $260 a seat, a bargain price by today’s standards. More than 32 million pounds of concrete and 1.4 million pounds of steel were consumed in the construction of Vanderbilt Stadium.

The new stadium, Dudley Field, is dedicated on Oct. 14 vs Michigan

A new press box and new seats on the west side boost the capacity to 27,901

The country musician’s Kick The Dust Up Tour came to Vanderbilt Stadium and included a number of other top country acts. The concert began in the late afternoon and continued until late in the night. Also taking the stage were Dustin Lynch, Thomas Rhett, Randy Houser and Florida Georgia Line.

The event, which drew over 65,000 people to the old Vanderbilt Stadium, is known as the event that brought lights to the venue. Also, according to Kara Furlong of the Vanderbilt News Service, “it was one of Graham’s first officially desegregated crusades in the South following the Brown v. Board of Education decision in May of that year.”

One of the nation’s top touring acts for the last 15 years made a visit to Vanderbilt Stadium and attracted a sellout crowd in the spring of 2009.

The Stones hit Nashville with the Bridges to Babylon Tour and played their biggest hits like “(I Can’t Get No) Satisfaction”, “It’s Only Rock `n’ Roll (But I Like It), “Tumbling Dice”, and “Honky Tonk Women”. The Stones surely did not disappoint.