NASHVILLE, Tenn. — If Vanderbilt’s offense is performing at a high level in 2022 then one may not have to look much further than how the team’s tight ends are producing.

Vandy has a solid and experienced quartet leading the position and has added some young talent to boost depth going into the campaign. It’s a group that will greatly factor in the Commodores’ offensive game plan each and every Saturday.

“Real excited about them. I think it starts with experience,” Vanderbilt associate head coach, special teams coordinator and tight ends coach Justin Lustig said. “(It’s good) having older guys, not only older guys, but guys that were here within (head coach Clark Lea’s) program for a year. We’ve only got one guy in that room that wasn’t here last year. That certainly helps establishing the culture and understanding the expectations that coach Lea sets.”

Led by fifth-year senior Ben Bresnahan, Vandy features four seniors at the position who all could not only factor in the receiving game but who also will be relied upon as key pieces of the extended offensive line. Bresnahan (6-4, 243) caught 10 passes for 104 yards last season (in just nine games) and, in 2020, hauled in 28 balls for 300 yards and four touchdowns.

The Georgia native said he’s 100 percent healthy going into this preseason and is excited about being able to, “attack” each practice. He and the Commodores went through their third day of fall camp Monday morning.

“We knew coming in we were just heads and shoulders over what we were even at the end of spring ball and now in camp,” Bresnahan said. “It’s just so nice we don’t have to do much install stuff, you can just get right into it and really be on our Ps and Qs and have a great relationship with the quarterbacks. Everyone is on the same page.”

Along with Bresnahan, Gavin Schoenwald came to Vanderbilt as a freshman in 2018. But the Brentwood Academy graduate didn’t record a reception until Sept. 18 against Stanford. His first touchdown reception came Oct. 30 against Missouri.

If the first few practices of the 2022 preseason are any indication, Schoenwald could be in line to have a breakout ’22 season. 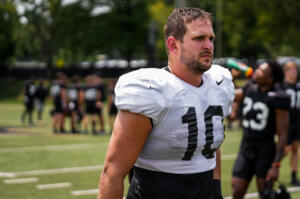 “(Schoenwald) is a Swiss Army knife. He’s the sixth man that comes in and does everything for you,” Lustig said. “He’s got a wide array of talents. He’s got good instincts, he’s got good ball skills. We’re going to take what the defense gives us, but he has shown to be an asset in the passing game.”

From the signing class of 2019, Justin Ball and Joel Decoursey have each played a reserve role to this point in their respective careers – Ball has two career catches. Cole Spence, from Georgia, begins fall camp as a true freshman who is coming off a prep career that included nearly 1,500 receiving yards and seven receiving touchdowns his final two campaigns in high school.

Spence will have the advantage of learning from and emulating a foursome committed to the greater cause.

“They’re just mature guys that want to get better – and they chose to be back here, (Bresnahan) and (Schoenwald) in particular, and I think that says a lot abut what we’re doing here,” Lustig said.

The Vandy offense has been creative in the preseason in using its tight ends. Bresnahan and Schoenwald have been working with the first team offense and often been on the field at the same time with one split wide and the other in tight. When the second team unit takes the field, Ball and DeCoursey are often involved on the same snap as well. 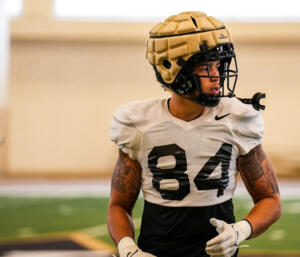 The usage of experienced tight ends for the Vanderbilt offense is also somewhat more possible because of the continuity of the offensive system from 2021 to the 2022 season. That gives Bresnahan and company hope that they’ll be featured more than not come Aug. 27 and beyond.

“It’s been great to have coach (Joey) Lynch and the system now for two years,” Bresnahan said. “We’ve been able to add on stuff and maybe take out stuff we didn’t like so it’s been great to really utilize tight ends. It’s pretty consistent that we’re getting a lot of balls.”