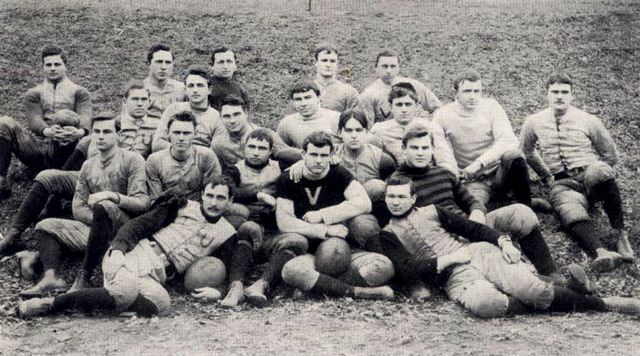 On Saturday, the Vanderbilt Commodores will roll into Knoxville for their annual battle with the Tennessee Volunteers. This will be the 108th meeting (107th if you ask UT, but that is another story) between the programs on the gridiron.

In 1892, Vanderbilt and Tennessee faced each other in football for the first time. Actually the two played each other twice during this season. Benjamin Harrison was President of the United States, but lost a re-election bid on Tuesday, Nov. 8, 1892 to Grover Cleveland. Vanderbilt had been playing football since 1890 with one game – a win over the University of Nashville (Peabody), 40-0. The Commodores were 3-1 in 1891.

Tennessee was in their second year of gridiron play with their one-game schedule in 1891 – a 24-0 lost to Sewanee in Chattanooga. The Volunteers arrived in Nashville for their first game with the Commodores after recording a season-opening win over Maryville, 25-0. The Vols did not have an official coach that season.

Vanderbilt began the season with a 22-4 loss at Sewanee and was led by player/coach and captain Elliott Jones. The following are the positions of the players as listed in the Nashville American:

The Nashville American gave this report on the Oct. 21 game played on the original Dudley Field at Vanderbilt:

“Another victory was added to the long list of victories on Vanderbilt’s great athletic field. Vanderbilt has never lost a game on the field. Vanderbilt was determined to win back the laurels lost in the game with Sewanee last Saturday, and every man went in to win. The weather was very warm and the field was dusty so that the men on both sides showed signs of distress before the game was ended. 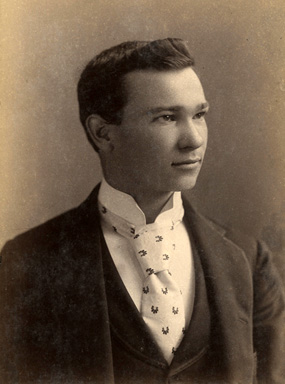 “Vanderbilt was slightly heavier than the University of Tennessee, but this did not count for much. Vanderbilt won by superior teamwork, and showed greater knowledge of the game while the University of Tennessee excelled in interference. Barr and Craig were unable to be with the team in the Sewanee game, and their presence in this one was a great help.

“University of Tennessee made most by circling the ends, while Vanderbilt soon found that it could work most effectively the centre. Altogether the game was a great success. There was a fine crowd and little of an unpleasant nature happened in the game–Gallaher and Marfield sustained slight sprains of the wrist and ankle respectively, and no other accidents occurred. Vanderbilt will continue hard training for the next two weeks, when they meet Washington here.

“The playing of Craig is very praiseworthy. He is quick and knows exactly what is to be done. He and Barr materially strengthened the team yesterday. The latter plays with more snap and force than any man in the eleven. Jones is still playing his steady half, gaining ground on every trial. Allen is playing excellent ball, his bucking of the centre being exceptionally good. His punting was one of the features of the day, one punt being at least fifty yards.”

In this era of college football a touchdown was four points while the extra point counted two points. It was also reported that Vanderbilt outweighed the Volunteers 165 pounds to 158.5 pounds. The Nashville American reported on the game’s first scores:

“The game was called promptly at 10:45, Vanderbilt winning the toss and taking the ball, U. of T. taking the south goal. Vanderbilt starts the play with a kickoff, Davis making eight yards on a kickoff. Allen then bucks centre for seventeen yards. Barr advances the ball nine yards by the same trick, but fumbles, dropping the ball; quick as shot Craig is on the ball, saving it for Vanderbilt. Fletcher tries the centre for no gain. Allen tries the end for three yards, but on going down loses the ball, but Craig is again on it. Jones bucks centre for twelve yards, making the first touch down. Throne kicks goal. Score, V. U. 6, U. of T. 0.”

The Vols scored the next touchdown, but missed the extra point for a 6-4 Vanderbilt lead The Commodores continued to dominate the game and were victorious 22-4.

The next contest for these future rivals was played in Knoxville on November 17. Starting players were:

The Knoxville Daily Journal reported on that game:

“Fully two hundred people were present at the ball park yesterday to witness the foot-ball game between the University of Tennessee boys and Vanderbilt’s eleven. The unfavorable weather prevented of Knoxville’s fair ones from attending, though several were present, and their faces added much to cheer the boys who fought manfully against muscle, rain and mud.

“Both teams arrived at 2:30, and spent several minutes in practice. The game was called at 3:10. U. of T. wins the toss, taking the ball and Vanderbilt takes the west goal. Mr. Allen, of Vanderbilt, was chosen as referee and Mr. Ed Ault, of Knoxville, as umpire. U. of T. puts the ball in play by means of the Cornell rush, gaining seven yards. Wegener makes twenty-five yards around left end, Brown works right end for three yards and Cannon bucks center for five yards. Brown then goes through the line for ten yards. The ball is now four yards from Vanderbilt’s goal, but on an unjust decision from the referee, claiming that in the rush, Vanderbilt’s men got the ball, the U. of T. boys lose their first chance for a touchdown.

“Vanderbilt tries several runs around the ends, but with little gain. Barr goes around right end for four yards. Throne makes six yards on same end. Jones and Connell try the center, but without gain. The ball then goes to U. of T. on fourth down. Brown makes a ten yard run around right end for four yards; Cannon bucks center for one yard; Wegener makes seventeen yards on a double pass around left end; Brown drops ball on ten-yard loss; Vanderbilt falls on ball.

“Vanderbilt now commences her favorite play of short bucks between the tackle and guard. This proved a Waterloo for the U. T. team. It seemed impossible to stop these rushes without some gain. Smith and Reed, of the U. T. team, do some excellent tackling, stopping Connell and Barr on a loss of some yards. Jones makes two yards through center for twelve yards and lands between the goal posts making first touchdown for Vanderbilt. Time, twenty-five minutes. Throne kicks goal. Score, Vanderbilt 6, U. of T. 0.”

Vanderbilt would keep the Volunteers off the scoreboard, and scored another TD and extra point to win the game 12-0. The Commodores finished the season 4-4. Adding to their pair of victories over the Vols were wins over Nashville and Georgia Tech with losses to Washington (St. Louis), North Carolina and two losses to Sewanee.

The Vols were 2-5 with wins over Maryville and Chattanooga and losses to Wake Forest, Sewanee (twice) and Vanderbilt (twice).

Traughber’s Tidbit: After defeating Tennessee in Knoxville in 1892, the Commodores traveled to Atlanta making it two games in three days. Vanderbilt won over Georgia Tech, 20-10. Next was a Thanksgiving Day game in Nashville against North Carolina. The Commodores lost that contest 24-0 for its third game in eight days.

If you have any comments or suggestions, contact Bill Traughber via email WLTraughber@aol.com.