Vandy signee first player to repeat as champion in 34 years

Van Paris finished the 54-hole event with a tournament total of 13-under-par 203.

“I knew we were playing 36 holes (Saturday) and I didn’t know if we were going to play golf today or not, so I wanted to get off to a good start to put myself in position for the win even if we only played 36 holes,” Van Paris told AJGA.com. “This morning I was thinking the same thing and I had a lead which was nice. I knew I just needed to play solid golf and do what I did yesterday.” 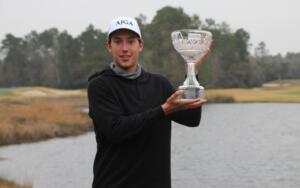 Starting the final 18 holes, Van Paris had a two-shot lead. He managed three birdies in his first eight holes before dropping a shot with a bogey on the par 3 ninth, making the turn at 2-under-par 34.

Van Paris went bogey free on the back nine, including a chip in for birdie on No. 14. He stuck his approach shot to three feet on No. 15, carding his sixth birdie of the day.

Van Paris added another birdie on the way in as the clubhouse leader to finish with a final-round score of 6-under-par 66. His lead held up despite three players tying the low round of the day of 66. Van Paris also won the event in 2019 with a score of 8-under-par 208 after a playoff.

“It means a lot to come to a place where I’ve had success before and get it done is really cool,” Van Paris said. “I didn’t realize I could be the first repeat champion until earlier this week so that was super cool. Things went my way this week and it feels good to be back in the winners circle.”

The first repeat champion in 34 years of the #AJGABoysChamp, Jackson Van Paris! pic.twitter.com/HTe4CH3ItE

The event has a storied past with champions such as Jim Furyk, Rickie Fowler and Jordan Spieth.