Ugochukwu and Riley to the Rescue

NASHVILLE, Tenn. — The biggest play Jeffrey Ugochukwu and Savion Riley have made as Commodores happened before they ever took the field for Vanderbilt.

On Aug. 6, Ugochukwu and Riley had been riding scooters on campus checking out the area around The Ingram Commons Residential Colleges. Ugochukwu happened to see a man walking nearby and watched as that man, Glenn Hampton, tripped and fell.

Ugochukwu and Riley sprung to action.

“(Riley and I) rush over there and he’s struggling to get up and he falls back down,” Ugochukwu said. “I see him bleeding and he’s not really talking so I try to flip him on his back. I took off my shirt and wrapped it around his head to try to stop the bleeding.”

Ugochukwu’s mother is a doctor, but Ugochukwu said the instinct to remove his shirt to help control the bleeding was just that, an instinct. He also quickly called emergency services with his mobile phone and then handed that phone to Riley while he comforted Hampton and tried to gather more information.

Hampton became somewhat responsive and told Ugochukwu the name of his wife. With Hampton’s phone, Ugochukwu found the contact for Angela Jackson-Hampton and quickly called her to explain the situation.

When the emergency medical personnel arrived on the scene they thanked Ugochukwu for treating the head wound so swiftly. The bleeding had stopped by the time an ambulance arrived.

“Very proud of those guys. They saw someone in need, they went to his aid, they stayed with him until help came, including giving one of their shirts up to use as a tourniquet on a wound,” Vanderbilt head coach Clark Lea said. “I know those guys didn’t do it for the attention, but I think it’s example of the character of the people we have in this program.

“It was a great moment for them to step up and be helpful and they did it.”

Hampton and his wife were in Nashville for Hampton’s stem cell transplant. Because his wound was on his head he was taken to the emergency room to make sure there was no bleeding in the brain.

Hampton is doing well now even though he still has a bit of a bruise from the fall. He also has a new Vanderbilt football shirt – the shirt used Ugochukwu used to stop the bleeding, a shirt Ugochukwu said was his favorite but one he insisted Hampton keep.

“Those young men are just absolutely tremendous. I cannot go on enough about how glad I am they were there,” Jackson-Hmapton said. “Ugochukwu sends me emails and texts to check up on (Hampton) every couple days. He’s just been amazing.”

As the battles for the starting 22 positions on offense and defense wage on throughout preseason practice, just as important has been the competitions for starting spots on special teams.

Those competitions can be a little trickier to evaluate because of the lack of so-called live repetitions where players are going at full-speed, but associate head coach and special teams coordinator Justin Lustig works with the rest of the coaching staff to find who can make the greatest impact in that area of the game.

“The real evaluation comes in two ways: We do a lot of competitive drills where we simulate kickoff and kickoff return, but we’re just condensing the space down so that they’re not running 70 yards on each play. Then, with offense and defense, there’s so much carryover from, like, a perimeter bubble screen is very similar to a kickoff return.

“Between the special teams drills and the offensive and defensive team, there’s enough evaluation there.”

Vandy does return kicker Joseph Bulovas to the 2022 team, a fifth-year senior who went 14 of 19 on field goals and made all 15 of his extra point attempts. The Louisianan also made two game-winning kicks.

At punter, Australia native and Florida Atlantic transfer Matthew Hayball joined the program over the summer.

“He’s been a great addition,” Lustig said. “He’s still got to tweak a couple things, but he’s had a great camp. What it allows you to do is multiple things: No. 1, in pin situations, to be successful there. And that’s a critical part of having success is making the opponent start backed up.

“The second piece is when we’re going against a dangerous guy, if he can have the ability t angle punt that thing outside the numbers with great hang time, we can minimize the effectiveness of the opponent’s returners.”

In the return game Lustig said Jayden McGowan, Rocko Griffin, Re’Mahn Davis and Will Sheppard will be considered when it comes to fielding kicks.

The Commodores were privy to a presentation and talk from visitor Daron Roberts this past week.

Roberts was a Student Body President at Texas, graduated from Harvard’s law school and coached in the National Football League and at the collegiate level. Now an author, Roberts travels the country as a motivational speaker.

Stangel joined the Vandy football staff in 2021 and was one of the first personnel brought on by head coach Clark Lea. Stangel had previously spent the previous three years with the Vanderbilt baseball program.

On July 30, Stangel’s last practice with the Commodores, the former University of Washington softball standout gave an emotional farewell to the current team and assured them she’d be cheering them on the rest of the season from her new home in Nevada. 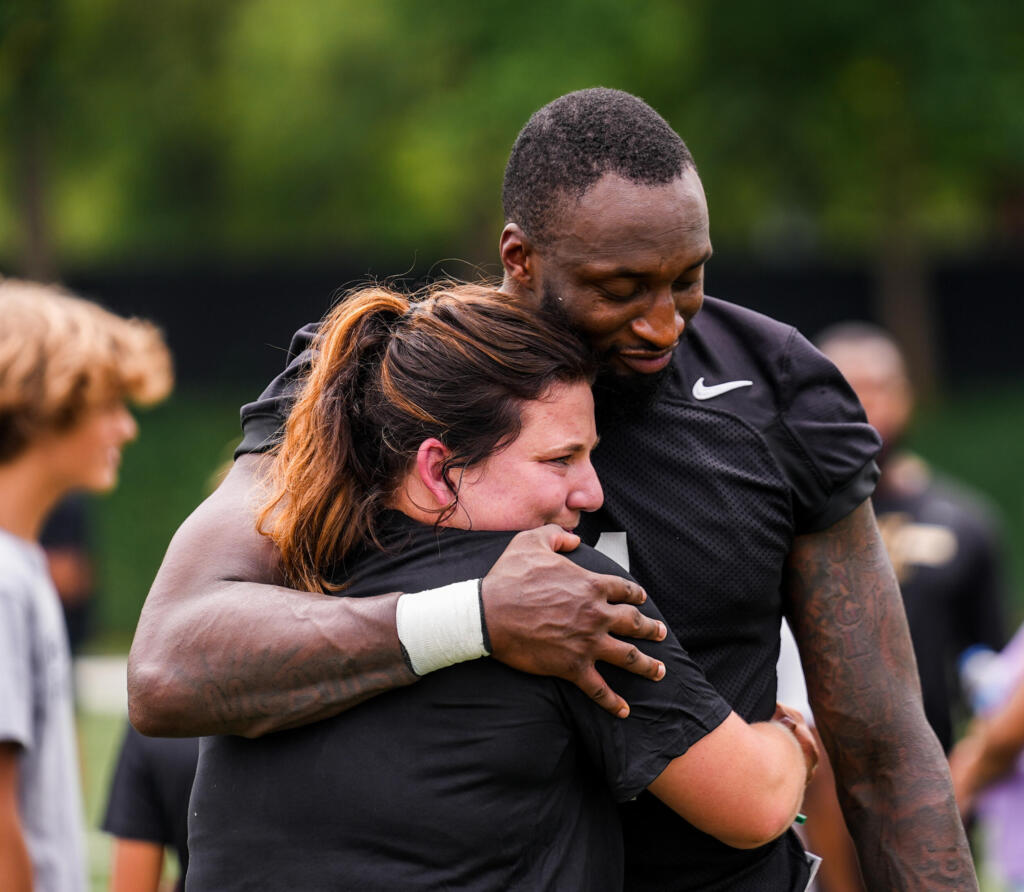