Vanderbilt plays at SMU on Saturday

NASHVILLE, Tenn. — It was less than two years ago, although it may seem like a much more distant past, that Scotty Pippen Jr., Jordan Wright and Jerry Stackhouse faced Southern Methodist inside Memorial Gymnasium.

That trio are the only current Commodores to have been a part of that contest Jan. 4, 2020, when the Mustangs won 92-81 in overtime. Pippen had 15 points and six assists while Wright posted two points.

“I remember we lost so I got a chip on my shoulder to come back better this time,” Pippen said this week about that first meeting. “I think we owe them one. We lost my freshman year. It was a game I definitely think we should have won. I think we’ll definitely have a chip on our shoulder.” 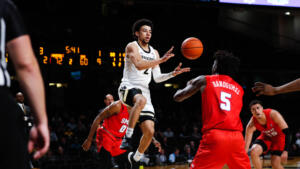 Pippen and the Dores will be looking for their first 6-1 start since 2015 when they go up against SMU inside Moody Coliseum at 5 p.m. Saturday. Vandy is a much different team and a completely different looking roster than what the Mustangs saw nearly 24 months ago.

Vanderbilt will also be a different team weeks from now when Liam Robbins and Rodney Chatman return to the rotation. But for the present, Stackhouse knows Saturday’s matchup will be an important test similar to that 2020 matchup.

“We’re nowhere near where we want to be toward the end of the year. We want to get better. These are important games. They’re barometer games for us – but how much of a barometer are they when we’re missing (Chatman and Robbins)?” Stackhouse said. “Those guys that we know are going to be a big part of our rotation and a big part of who we are.”

Vanderbilt (5-1) is on a three-game winning streak having held the opponent to 50.3 points per game during that span. As of Thursday, the Commodores now rank sixth nationally in scoring defense (55.2 points per game allowed), 10th in field goal percentage defense (35.8 percent), 22nd in turnovers forced (18.17) and 20th in fewest fouls (84).

So while it appears early on that the Dores will hang their hat on shut-down defense, Stackhouse would like to see 40 minutes of quality offensive hoops.

“We’re still trying to find a way to put together two halves offensively,” he said. “We’ve been better in the second halves of games than we have been in the first half, but we got to try to find a way, especially against these teams that we’re playing, those are the ones that we need to get off to a better start (against).”

Southern Methodist (11-6 last season) is coming off an 83-64 win over UNLV on Wednesday and has won eight in a row at home. Senior guard and TCU transfer Kendrick Davis (20.2 ppg) leads three Mustangs scoring in double figures.

Vanderbilt has faced SMU 21 times prior and first met in 1953. The Dores have won 14 of the 21 matchups since. The ’20 win by SMU broke a five-game winning streak in the series for Vanderbilt.

After Saturday, Vandy returns home for a crucial three-game stretch at home against Temple (4-3), Loyola Chicago (6-2) and Austin Peay (3-3). Beating the Mustangs would be an important springboard into that portion of the schedule.

“It’s a good test for us. It’s a team that presents some challenges for us,” Stackhouse said. “But defensively I think we should be able to match up and that bodes well for us offensively. I think we’ll be able run our stuff and hopefully execute the way that we’re capable of.”

• Vanderbilt has forced at least 13 turnovers in all six games this season.

• Trey Thomas has played 31 straight games for the Commodores.

• Vanderbilt has now made at least two 3s in 45 straight games.