Vandy has talented trio in backfield

NASHVILLE, Tenn. — The Commodores could very much be a force to be reckoned with out of the backfield in 2022.

Vanderbilt returns all three of its top running backs from the 2021 season, a trio with distinct skill sets that should give the Vandy offense an advantage each week.

“Collectively I feel like we have a strong group. We have some depth there that we didn’t have a year ago,” Vanderbilt running backs coach Norval McKenzie said. “Overall, man, they’re doing extremely well. Taking the meeting room to indy, taking indy to the team setting. Very pleased with the group right now.”

In the third game of the 2021 season, Re’Mahn Davis suffered a foot injury in Vanderbilt’s matchup with Stanford. It was a tough blow for Davis and the Dores considering the former Temple standout had averaged 4.8 yards per carry on 44 attempts.

Davis (5-9, 205) is 100 percent this preseason and has been in the primary three-man rotation throughout fall camp. The Californian has 315 career carries and is approaching 1,500 career rushing yards. 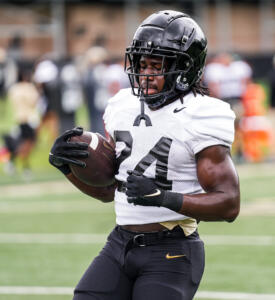 “Your biggest ability is your availability. I think he’s doing a great job of taking care of his body,” McKenzie said of Davis. “It’s one of those things he’s got to be on the front end of it, not the back end of it. Right now he’s doing well. Condition level seems to be pretty good and he’s practicing really hard. So we’re pleased with where he is from a physical standpoint.”

When Davis went down with injury in September, Rocko Griffin (5-9, 203) picked up the slack and became Vandy’s go-to back. He rushed for 517 yards in the nine games which he got a handoff and thrice eclipsed the 100-yard mark – including the final two games of the ’21 season.

The Georgian scored four times in 2021 and averaged 3.6 yards per rush.

Last, but in no way least, is the speedy Patrick Smith (5-10, 185) from Florida. Smith played in 10 games as a freshman and ran for 75 yards against Florida, 95 against Missouri and 84 against Kentucky.

“Could be a three-headed monster, somebody could emerge – all we’re trying to do is just go out there and compete, have fun, strengthen the team and let the best man play,” McKenzie said of that group. “At the running back position you got to to get in a kind of a groove, right? I don’t want to go out there and say we’ll have musical chairs, but I feel very strongly about the top three guys. I think a lot of people do.

“Anybody who goes in we’re going to trust them, we believe in them and I’m excited about all three guys and where they are.” 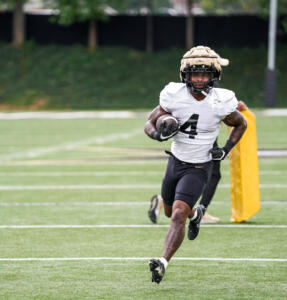 Behind the aforementioned trio in the Vanderbilt backfield are Syracuse transfer and senior Cooper Lutz, sophomore Dylan Betts-Pauley and freshmen Maurice Edwards, Chase Gillespie and Isaiah Fontan. That group is competing daily to be ready should anyone in front of them on the depth chart falter.

McKenzie added that entirety of the group, especially those who are back with the team from the ’21 campaign, have become more comfortable with the offensive coaching staff which has equaled better production.

“I think a year ago a lot of kids didn’t ask questions, maybe because of pride, maybe because of ego. We know them better, they know us better,” McKenzie said. “There’s that continuity now between coach and player and that relationship. Hey, ask a question, let’s talk about it, let’s figure it out.”