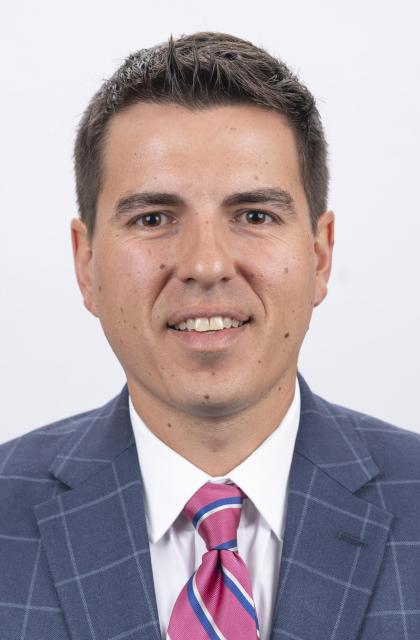 George, who joined Vanderbilt in 2018 after previously spending over a decade between positions at Stanford and Notre Dame, is responsible for leading the department’s communications team in alignment with institutional-level strategies and tactics to advance Vanderbilt’s distinctive athletics program. George works closely with Vanderbilt’s partners across the Division of Communications to provide strategic direction and coordinate communications efforts, including content development for multiple platforms, media relations, social media engagement, and crisis and issues management.

George’s tenure at Stanford from 2012-18 coincided with one of the most successful stretches in The Farm’s history, highlighted by the Cardinal winning six consecutive Directors’ Cups as the nation’s most successful athletic departments, 21 national championships, six straight football bowl games along with three Rose Bowl appearances, and 31 NFL Draft picks — including four first-round selections.

Stanford’s communications staff teamed to promote 44 Olympic medalists during George’s time on The Farm, including a school-record 27 medalists (14 gold) during the 2016 Rio de Janeiro Games.

George spent time at Notre Dame as the primary media contact for volleyball, men’s and women’s swimming and diving, and softball. He was the secondary contact for women’s basketball during the program’s 2011 and 2012 NCAA Final Four runs and authored the department’s social media accounts. George also was the founder and editor of Irish UNDerground, the athletic department’s blog.

He joined the Irish staff after spending two years as an athletic media relations graduate assistant at Western Kentucky, where he worked closely with the Hilltoppers’ swimming and softball programs and coordinated the media efforts for the 2007 Sun Belt Conference Swimming and Diving Championships. He earned his master’s degree in sport administration from Western Kentucky in 2007.

George worked as an operations intern with the Lexington Legends (Class-A affiliate of the Kansas City Royals) in 2005.

George is a 2005 graduate of Centre College with a degree in economics. He was a letter winner for the Colonels’ football team and voted as president for his fraternity.

George, an avid golfer, is a former basketball referee and baseball umpire, having officiated both sports at the youth, prep and collegiate levels.

The Kentucky native and his wife, Leigh, live in Nashville with their daughter, Anderson, and golden retriever, Tucky.