“Everything needs to be fair for all,” Vanderbilt tight end Justin Ball said this week. “Justice can relate to laws in our country, to the morals of your person.

“I feel like justice is a good word to encompass everything that we need to change in this country.”

Ball is one of the many Vanderbilt student-athletes who chose to amplify their own voice during the 2020 season by putting a word or message on the back of their helmets to bring awareness to social injustice. Unity, Say Their Names, No Justice No Peace, Equality, Black Lives Matter and Justice are some of the phrases Commodores have picked to showcase this fall.

“There’s a lot of good things happening toward the right direction. There is still a lot of change that needs to happen,” Vanderbilt tight end Ben Bresnahan said. “I feel like it really starts with people getting themselves educated, knowing about each person’s background.

“I feel like that’s the biggest piece, is just to have that conversation and get the education that you need about the whole situation that we’re going through right now.”

Bresnahan, a graduate of West Forsyth High School in Georgia, wears Black Lives Matter on his helmet. He said he always felt himself educated on the subject of race relations, but it wasn’t until a workout with teammates this summer altered his perspective.

During the height of protests across the country, Bresnahan said he had great, impactful conversations with his fellow Commodores.

“I felt like maybe a lot of times I was colorblind to stuff,” he said. “It was eye-opening to see how some of my Black teammates have really had different experiences that I didn’t have a clue about.” 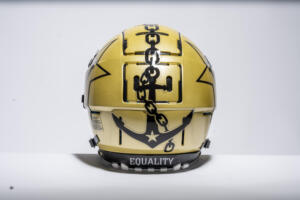 Ball, a Maryland native who graduated from Gonzaga College High School in Washington D.C., said he’s witnessing many of the issues his own grandparents and great grandparents discussed witnessing during their own lifetimes. As a student-athlete competing in the Southeastern Conference he also knows that he and his teammates have a platform to have their voices heard.

Wearing the word Justice on his own helmet, Ball credited Vanderbilt head coach Derek Mason with allowing the team to speak openly about social issues.

“When we were at home (over the summer) doing Zoom meetings, coach Mason would have team meetings strictly talking about issues in the world. We wouldn’t even talk football,” Ball said. “Whoever had anything to say or had to get something off their chest they could let it be known.

“Our team has done a great job of accepting everyone else and their beliefs and working to all become one as a unit, as a team and as a brotherhood.”

Part of Vanderbilt football’s initiatives Saturday will be to highlight student-athletes from across all Vanderbilt sports involved in social activism, to profile alumni currently involved in the fight against social injustice and to feature small business owners and how each has been affected by the current social climate. On the Vanderbilt Stadium video board, student-athletes and alumni will be sharing perspectives on what they are doing to enact change in the community.

And while the Commodores will be focused on the fight to get their first win of the season on the field, many will continue to strive to make the world a better place off the field.

“I still will always stand by football being the greatest game because it’s all of us from so many different backgrounds, so many different races coming together for a common goal,” Bresnahan said. “That’s the perfect world if you look at it.

“We just got to figure out a way to get society to look more like the locker room, that’s really how I feel.”