Vanderbilt's campaign gets underway against Kentucky

NASHVILLE, Tenn. — Perspective has certainly been a concept for everyone associated with college athletics to consider in 2020. It’s a concept that Vanderbilt head coach Darren Ambrose continues to grapple with daily.

“We’ve learned pretty well, and to their credit and for a long period of time when they didn’t know where they were going, they just kept moving forward. I think we’ve come out of it in pretty good shape.”

Ambrose and his Commodores will make their long-awaited season debut at 2 p.m. Sunday when they host Kentucky. That match will mark the beginning of an eight-game, conference-only slate greatly impacted by COVID-19.

Vandy’s spring season was cut short due to the pandemic and its 2020 campaign will look as different as it has ever looked. Ambrose’s squad has also dealt with the limited practices and training sessions as student-athletes come in and out of quarantine to guard against a coronavirus outbreak.

“As coaches and athletes we are so geared toward controlling and having a control of things that we do,” Ambrose said. “The truth is, this year, there is so much out of our control that we just don’t know.

“So coming into it, our mindset is, we’re going to give everything we got and we are going to prepare as best we can. But that may still mean there are gaps in places. No one is coming out everyday to not do their best – sometimes the best this year may be hampered by some things that we we’re just not all aware of.”

If the Commodores are indeed able to field a complete squad, they should again be able to compete for an Eastern Division title after winning that crown in 2019. 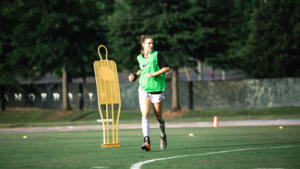 Redshirt junior Haley Hopkins, who poured in 13 goals and registered four assists, is back as the focal point in the attacking third. Midfielder Maddie Elwell, who had a team-leading 10 assists, has returned for her senior season.

But Ambrose won’t be quite ready pen a starting lineup until just before match day because of so many variables during this preseason.

“We’ve got a lot of experience. We do have a lot of kids back that have been a part of two or three big years for us,” Ambrose said. “So I think we do have a comfort level with each other. Do we know Hopkins is going to play up front and hopefully throw in some goals? Sure. Do we expect Shamburger and Asari and Elwelll to have a role? Absolutely we do.

“But at the moment it’s just been about them getting up to fifth and sixth gear. I think we have standards in our program, but because we didn’t play in the spring and because we were out so long, it has taken us a little longer to remind ourselves of what we do. But this most recent week or two of practice, things have started to click and things are showing up where they need to show up – and that’s been kind of cool.” 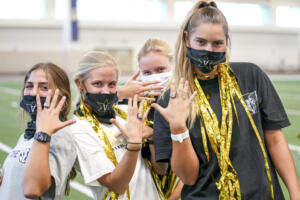 Repeating that success in 2020 may not necessarily be difficult, it will just be measured in a different manner.

“(There was a preseason) moment where we were pushing and we just put our foot on the gas and pushed and I just think at that moment it was the wrong time,” Ambrose said. “We made a decision, ‘Can we do this? What’s success to us this year?’

“It just took the wind out of us. I think we all took a step back and – and I probably took the biggest step back – and said what’s going to be success this year? So I think we are approaching this as, ‘Hey, we’re going to play eight games. Our goal is to win every game. But we won’t be able to control everything there is to control about those games anymore.’ ”