Seniors for All Seasons

NASHVILLE, Tenn. — When Vanderbilt’s 10 seniors take the field at 6 p.m. Saturday at the Vanderbilt Soccer/Lacrosse Complex there will undoubtedly be a unique aura for the Commodores.

It’ll be senior night for Vandy against Ole Miss. A senior night for a group of student-athletes who rode the roller coaster of the last few months only to come out poised to make a serious postseason run they all knew possible.

“I think building off the foundation we began to set is huge,” senior Maddie Elwell said this week. “We’ve had wins and losses, both of which we can learn so much from. I think there is a new buzz on the team. We’re going to Orange Beach (Alabama for the SEC Tournament), we get to travel, we get to play against the teams that we did not feel we competed to the best of our abilities against.

“It is kind of a motivation and I think using that moving forward will be a benefit. I think everyone is really excited.” 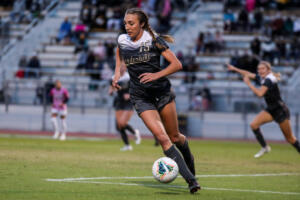 Elwell and the nine other Commodores who will be honored as seniors Saturday have experienced a final season unlike any other in Vanderbilt soccer history.

Their spring season was cut short due to the COVID-19 pandemic. The summer months were coupled with anticipation of a new season and the possibility of there being no season at all.

When Vandy did finally get to start an eight-match, SEC-only slate, it lost three of its first four – all by one goal and two of the three in overtime.

Vanderbilt head coach Darren Ambrose said it would have been very easy for his seniors, who had never lost three matches in a row during their remarkable careers, to go ahead and mail it for the remaining four games.

“But they’re competitive kids and I think they’ve demanded a bit more of themselves and as a result they’ve kind of raised the bar for the other kids, too,” he said. “I think that’s the one thing I’m really pleased about is how they’ve not quit. They’ve continued to go on as they’ve gotten healthier and continued to try to do the things that we were trying to do early on, they’re just doing them a little bit better and a little bit sharper because they’ve put in the extra work.”

Consecutive wins at Florida, vs. Georgia and at LSU, respectively, have the Dores in prime position to receive a double bye at the SEC Tournament later this month. The stretch of victories has only lengthened the resumes of a senior class which will go down as having the best winning percentage in program history. 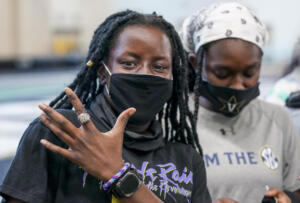 Elwell, Haley Hopkins, Olivia Simmons, Kayla Eason, Myra Konte, Leila Azari, Blue Ellis, Sarah Fuller, Madiya Harriott and Rebecca Rossett have been a part of 47 victories out of 71 matches and are the 10th group of seniors to have won at least 47 games.

Ambrose couldn’t help but wonder how many more they could have won with a full offseason to train and bond and a full nonconference schedule allowing them to jell and grow.

“There was a lot of adjusting that had to go on in the beginning of the season,” Elwell said. “We had a big class above that left and given the circumstances of COVID we weren’t able to bond as much off the field. That was really hard to just jump into a season like that without being able to have the locker room or the training room or hang out in each other’s rooms.

“Once we began to adjust to the new reality that really started to translate on to the field. Trusting in each other and your own abilities and bringing that energy on to the field I think really did make a big difference. But it was definitely hard.” 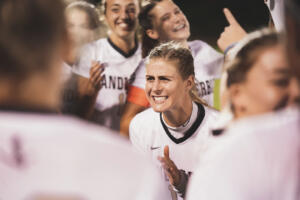 Elwell and Azari go into Saturday’s match with 17 assists for their careers, each needing one more to enter into the top 10 for the most in a Vandy career.

Hopkins has been the offensive star of the group by netting 30 goals. A program record 13 of those have been game-winners.

Ambrose lauded how Simmons and Harriott have begun to play like seniors who know each match could be their last and how Fuller, at keeper, has taken her game to the next level. And for all the statistical accomplishments, Ambrose will look back on how the group adapted to overcome everything.

“This year when we were talking about this in the spring, about having this group of 10 seniors with a good freshmen class coming in, we really were hopeful that this could be another year for them to finish top of the pile, be in the NCAA Tournament – all those things,” the veteran head coach said. “I feel bad that this wasn’t quite the going away party that we hoped it would be for them. But they’ve made the best of it.

“At this point that’s perspective and all we can really expect of them. I think that’s the thing I’m most pleased with.”

Vanderbilt (4-3, 4-3 SEC) cannot win a division title going into the final weekend of the regular season, but a victory over Ole Miss (3-4, 3-4 SEC) would likely give it a top-four finish in the overall league standings. That would mean an automatic trip to the SEC quarterfinals scheduled for Nov. 17.

So there is plenty on the line for the Commodores on Saturday night, a night dedicated to a group of seniors who left a legacy during a final campaign no one saw coming. 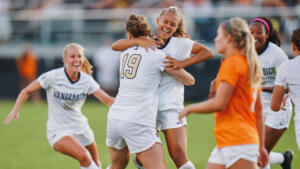 “These girls have gotten me through way more than I could have ever imagined,” Elwell said. “Even though this senior night might not be everything we imagined, we also know that we’re kind of celebrating all that we’ve been through and all that we’ve accomplished together and I think we all know that at the end of the day.

“I think we’re just still going to be excited and just as proud of ourselves and each other especially after getting through a season like this one.”