NASHVILLE, Tenn. — The British cycling team had no record of success at the turn of the century. It was an organization that had won just a single gold medal in 76 years of competition.

But under the direction of Sir Dave Brailsford, the team became — and has remained —a powerhouse in the world of competitive cycling. The turnaround was created partly from a mindset of thinking small before aiming big, making incremental improvements that over time lead to major successes. 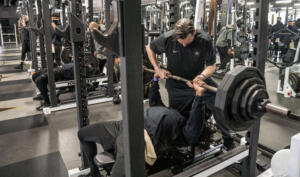 “We’re still trying to understand we need to do things right before we move on,” he said. “Just trying to get one percent better every day in whatever we’re doing.”

But Hourigan saw the opportunity to build a successful program at Vanderbilt akin to what the Demon Deacons showcased in recent years.

“To be able to work with (Lea), to be able to work and develop a program, there’s no better person,” Hourigan said. “To do this from the ground up with him, I was like, ‘You know what? I want to do this. I want to get this done.’ We’re SEC. This is where I want to be. This is my goal.

“My position as a strength coach in this league and to compete and make a difference in these kids’ lives? That’s something I want to see.”

A former offensive lineman at Plymouth State (New Hampshire), Hourigan began his career at Clemson, where a young Tim Corbin was an assistant baseball coach. Time spent with the Kansas City Chiefs in the NFL and with Arizona, Richmond, Northeastern and Bowling Green in the NCAA preceded his move to Wake Forest. 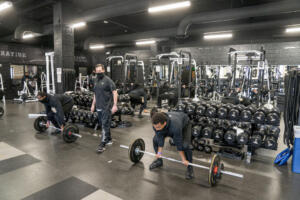 It was there that Hourigan saw what success truly looks like. After going 3-9 their first two seasons, the Demon Deacons won three straight bowl games.

“At Wake, when we went in there and did it, the most gratifying time of that whole job was when we played our first bowl game and we won,” Hourigan said. “Just to see those kids, how excited and to feel their joy. Everything that they went through, that they could finally celebrate all at once? To be able to do that with them was amazing.”

The past two months have been formative for Hourigan and his own strength and conditioning assistants. His first few weeks with the Commodores were spent in Vanderbilt Stadium working on discipline, communication and how to do things correctly, and correctly the first time.

From there it was about such simple matters as organizing and cleaning the weight room and locker room—a small yet symbolic task.

“We want to leave it looking the same way from when they got in there for the next person,” Hourigan said. “It’s about understanding the importance of legacy.” 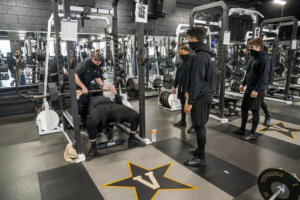 What does success look like for Hourigan? The answer to that is no different from what anyone else associated with Vanderbilt football would say: winning.

Hourigan said he’s not only focused on making the Commodores winners, but also on getting to experience that joy of winning alongside them. To attain those victories this season and for seasons to come starts with building a foundation that Vandy can take pride in long after they have hung up their cleats.

“The one thing that will be instilled in this team is discipline,” Hourigan said. “Understanding that they’re going to be humbled to where they’re at and what they’re trying to do. And creating something that is going to be the foundation of everything else in terms of how it’s going to be built starts now. They are the beginning of it.

“You’re in the infancy of the building, the foundation, the bricks. You’ll always remember being out in the snow, being out in the freezing cold of the stadium. You’ll do all these things that no other team has done—they’ll be the first. From there we’ll move on and make sure it’s instilled and that the younger kids will have that understanding. They’ll leave that legacy to them.”

Quality Hours With Hourigan by Vanderbilt Athletics on Exposure