FAYETTEVILLE, Ark. – The Vanderbilt women’s golf squad will begin its quest for a first national title Friday at the NCAA Championships.

The Commodores are one of 24 squads competing at the Blessings Golf Club near Fayetteville aiming to become one of eight teams advancing to match-play competition next Tuesday.

This marks the Commodores’ first trip to the NCAA Championships since 2014. It also marks Vanderbilt’s 10th appearance at the national championships.

Greg Allen, who has guided five other Vanderbilt teams to the NCAA Championships, is excited to see his Commodores compete among the nation’s elite squads.

“We are so pumped for this opportunity. The girls has worked hard all year and they so deserving of playing for a national championship,” Allen said. “We hope to play a lot of golf in Fayetteville so we’re made sure to get as much rest as possible. We’re also tried keeping things relaxed and fun, and we’ll continue to make the focus throughout the tournament.

"As a team, we've talked about all the extra bells and whistles that comes from a national championship but at the end of the day, the hole is still the same size as every other golf course. The objective remains the same, hit the ball as few times as possible. My expectation for this group will continue to be the same as well -- focusing on a great attitude, having positive body language, staying patient and playing tough." 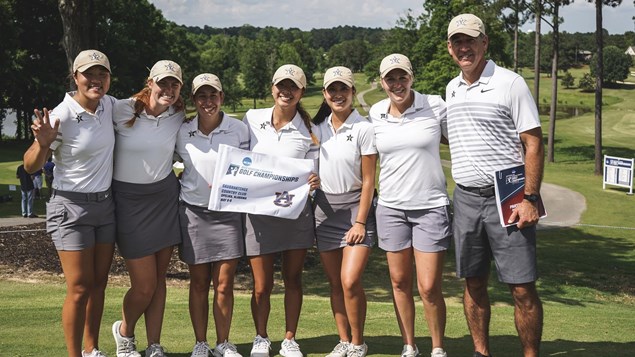 The eighth-seeded Commodores will get tee off Friday in the opening round from 1-1:45 p.m. They are paired with seventh-seed Stanford and ninth-seed Florida State.

Vanderbilt enters the NCAA Championships off an impressive team victory in the NCAA Auburn Regional in Opelika, Alabama. It was the Commodores’ third all-time regional title.

Auston Kim enters the NCAA Championships as one of the nation’s leading players. A freshman from St. Augustine, Florida, Kim has enjoyed a remarkable spring campaign. In her last outing, Kim became the third Commodore to capture NCAA Regional medalist honors, finishing with a 54-hole 6-under-par 210.

After the SEC Championships in late April, Kim also advanced to the United States Women’s Open by winning a sudden-death playoff to claim one of two spots available at a qualifier near Portland, Oregon. The U.S. Women’s Open will be held May 30-June 20 in Charleston, South Carolina.

The Blessings – One Tough Venue

A difficult test awaits Vanderbilt and the other 23 teams vying for an NCAA national title. The Blessings Golf Club, home course for the Arkansas Razorbacks, opened 15 years ago on a hilly tract just west of Fayetteville. Funded by Tyson Foods chairman John Tyson and designed by noted architect Robert Trent Jones Jr., the Blessings owns a reputation as one of the United States’ toughest golf courses.

In 2012, the par-72, 6,473-yard Blessings displayed its difficulty as the host site of the Southeastern Conference Championships when Auburn claimed the title with a whopping 54-hole total of 52-over 916. That year, then-Vanderbilt standout and current LPGA member Marina Alex finished second individually.

Vanderbilt’s History at the NCAAs

Vanderbilt hosted the 2012 NCAA Championships at the Vanderbilt Legends North course. The Commodores finished 11th at the event, with Alex earning a tie for 14th place in the individual competition.

The Commodores enter the NCAA Championship ranked eighth nationally by Golfstat. They are ranked sixth by Golfweek and the Women’s Golf Coaches Association (WGCA).

The Commodores are the top-ranked SEC team. Four others from the conference – No. 10 Arkansas, No. 11 Florida, No. 12 South Carolina and No. 13 Auburn – are among Golfstat’s top 15 teams.