NASHVILLE, Tenn. — Beverly Brothers has seen plenty of changes at Vanderbilt, big and small, since starting in Athletics 38 years ago. The football administrative assistant, who recently retired, came to the university at a time when letters to recruits were still being written on typewriters.

The arrival of computers and a lone office printer—“I could not figure out how to use that stupid printer,” Brothers recalled with a laugh—were a sign of what was to come, but through it all she remained a dependable presence in the office and could always be counted on to put smiles on the faces of those around her.

For co-workers who encountered her daily, as well as generations of Vanderbilt student-athletes who sometimes only knew “Ms. Bev” by reputation, she changed her corner of the university for the better. It was never just a job to her. She believed so strongly that Vanderbilt was a special place that she went out and made it so.

“When you think about Vanderbilt University, you think Beverly Brothers,” said Norval McKenzie, BS’05, MEd’09, the Commodores’ run game coordinator, running backs coach and a former football student-athlete. “She embodied what our university stands for: a standard of excellence. She directly impacted my life over the past 21 years as a student-athlete, a graduate assistant and now coach.

“She is a phenomenal person, and we love her. I hate to see her go.”

A Mainstay in Athletics

Brothers and her husband, Vaughn, moved to Nashville from Clarksville, Tennessee, in 1983 so that their two sons could attend Brentwood Academy, a private preparatory school south of the city. Having previously worked in the football office at Austin Peay State University, she came well-recommended when there was an opening on former Vanderbilt head coach George MacIntyre’s staff.

Brothers was already very familiar with Vanderbilt. Her sons (Jeff, who would graduate from the university in 1993, and Jody) had attended MacIntyre’s football camps multiple times, and the family sometimes attended Vanderbilt games—just as Brothers had with her parents while growing up. She jumped at the opportunity when MacIntyre asked if she was interested in a part-time position as an afternoon receptionist. 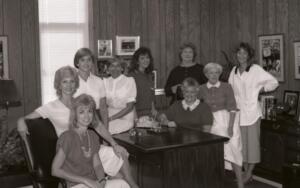 About a month later, she moved into the football office as a full-time administrative assistant in recruiting. There were no emails or scanners in those days. She typed the recruiting letters on her typewriter and photocopied as many sheets as needed to stuff into envelopes and adorn them with stamps before sending them out through the mail.

That was the first of 17 offices she occupied in almost as many positions, shifting at various times to the ticket office and the basketball office to fill a supposedly short-term, unexpected vacancy. It lasted two years. She moved back to football in 2004. Most recently, she worked on football business matters, handling purchase orders and supplies, shepherding expense reports and making sure people like the referees used in scrimmages were paid.

Yet as seamlessly as she kept things running over the years, it wasn’t just her long tenure—or the ever-popular candy jar that she kept stocked for visitors—that made the moniker “Ms. Bev” universally understood shorthand around Vanderbilt Athletics. It was something more.

Brothers grew up around team sports. Her father coached football, and her brother played the sport at the University of Tennessee. In the Title IX era, she might have followed in their footsteps on the softball diamond—her dad also coached baseball, and she grew up playing softball in the park across the street from her house. With that background, it’s hardly surprising that people found not just chocolate but camaraderie when they stopped by her office.

“Ms. Bev is synonymous with Vanderbilt,” said Robynn Candish, assistant athletic director for fan engagement and hospitality. “Anyone who has worked here over the years knows her by her wit, funny stories and her love for what Vanderbilt Athletics is all about. Her office was a place you could go for a quick—or sometimes long—break, to visit and share some laughs.”

New employees learned to go to Brothers if they had a question. If she didn’t know the answer, she was always the best bet to know who would have it. That’s how Hunt ended up getting to know her. After working at the University of Alabama, South Dakota State University and the University of Connecticut, he arrived at Vanderbilt and wanted to know how to make purchases for the football program. It sounds almost like a scolding when Brothers describes explaining to him that he better not expect payment without first submitting a quote. But the mock sternness of the message belied the warmth that forged yet another friendship.

“I’ll go in her office some days, talk to her for 10 minutes and move on,” Hunt said. “But those 10 minutes—we’re not in the same age demographic, but it feels like we are because she can talk to anybody.”

It didn’t matter who you were or how often she saw you.

“There were times, even when I was retired or in the NFL, I would come back and there were a few people in the building I made sure I stopped by to see,” said defensive ends coach and former student-athlete Jovan Haye, BS’07. “She was one of them. It was always a pleasure. If you’re having a down day, she’s always up. She’s always enjoying life. It’s inspiring.”

When the NFL’s Houston Oilers relocated to Tennessee in 1997, an old family friend from Austin Peay asked Brothers if she would be interested in working for the team. She said she thought about it for all of a minute before politely declining. It was the only time that she gave even that much thought to leaving Vanderbilt. By then, the university was home.

She and her husband initially kept the family farm in Clarksville when they moved to Nashville, Vaughn commuting back and forth each day. They planned to move back once their boys left for college. But then Jeff got the chance to play football at Vanderbilt, and it made sense to stay in Nashville a while longer.

Then Vaughn passed away from a heart attack in 1990—felled the same week Jeff was to make his first start at quarterback. Both sons told their mother they wanted to quit school to find full-time jobs. She told them in no uncertain terms that wasn’t an option. They were going to finish college.

Mother and sons were going to move forward, as Vaughn would have wanted. For Beverly, that meant the community she was building at Vanderbilt.

“It saved my life,” Brothers said. “It did. It helped me get through so many tough times. I had so many friends here. I just couldn’t leave. I knew that my friends would take care of me. I never thought about doing anything else.”

She still loves being part of Vanderbilt. Nearing her 75th birthday, she’s just ready to let someone else keep the candy jar full. But she’ll put down her list of do-it-yourself projects when Saturday rolls around and kickoff nears. She has stopped working, but she isn’t leaving Vanderbilt behind her.

“For 38 years now, Ms. Bev has shown Vanderbilt Athletics what it means to dedicate yourself to your passion,” said Charlotte Siegel, director of football internal operations. “Her love for this program has been evident in her endless positive energy and her selflessness to her co-workers. While she’ll be missed in the office every day, we know she’ll continue to make her presence known in the stands as she cheers on her beloved Commodores.”