Media Day in the A

ATLANTA — Vanderbilt took center stage Tuesday at the College Football Hall of Fame as Commodore student-athletes and head coach Clark Lea spoke at SEC Media Days about the state of the program and expectations for the months ahead.

Second-year head coach Clark Lea, quarterback Mike Wright, tight end Ben Bresnahan and linebacker Anfernee Orji were there to discuss anything and everything about Vandy football.

“We know in time Vanderbilt football will be the best program in the country,” Lea said. “As I said a year ago, there are no cheat codes, shortcuts, no hacks that will allow this to happen overnight. This is still about going the long, hard way, independent of the trends and headlines generating the most attention right now in college football.

“We are engaged in what has become a unique form of team building. We are a relationship-driven, student-athlete-focused program that values the holistic development of our people over all else. To us, this isn’t an antiquated concept. It still matters. When you do the right things, the right way, with the right people, with respect and appreciation, you will not be denied. When you’re smart in design and disciplined in your approach, you win out in time. That’s Vanderbilt football.”

Lea began his main podium remarks at 10:30 a.m. local time and spoke at length about the progress in his program since he took the stage during last year’s event in Alabama. Lea touched on a number of topics before fielding questions and, during that segment, publicly announced that Wright will be the team’s starting quarterback this fall.

Wright, a junior, threw for 1,042 yards in 10 games in 2021, completed eight touchdown passes and ran for another score. The Atlanta native attended the Manning Passing Academy earlier this summer to continue to develop his leadership skills going into his third season in black and gold. 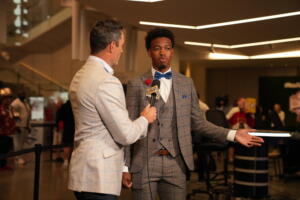 “It was tremendous. I learned so much,” Wright said of that experience. “That entire family is just real hands-on, really helpful and they communicate really well. I’ve talked to Mr. Archie Manning three times since that camp. He’s just texted me just to check in.

“The same with other quarterbacks from across the nation. We’re all in a group chat, and we’re sending each other advice because we’re all going through the same problems and the same things as far as being leaders on the team.”

Wright and his sharp-dressed teammates began their day at 8 a.m., making the rounds at the downtown Atlanta venue for radio interviews and other conference obligations. Lea did the same—albeit on a different timetable—before his appearance on the main stage.

Tuesday’s event was a break from summer workouts, where Lea has watched his put in the work to gear up for the 2022 season. He’s been impressed with what he’s seen.

“The more important part of attitude is beneath the surface, and they’re acknowledging that there’s just a deeper level of buy-in. We’re bigger, faster and stronger—that’s both in our development and in our recruiting. And it’s exciting,” Lea said. “The young players have acclimated quickly because we have strong leadership at the top that know what they’re doing and kind of vertically integrate the freshmen.

“The older players also recognize skill levels in those freshmen that are going to help us be the best team we can be. It’s has all worked hand in hand to help build through the summer.” 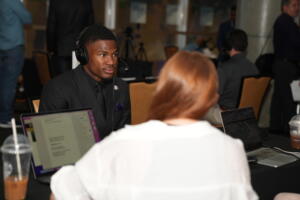 Added Orji: “(Summer work has been) intense, not only with the coaches but with the players too. We know what we want to get done, so everyone is pushing each other to the highest level. We’re all trying to earn it every day, just trying to be the best players we can be.

“I feel like we’re more prepared than we have been in the past. I feel like through this spring and this summer we’ve trained super hard, so we’ve prepared ourselves to enter camp with a dominant mindset to get better.”

Vandy, coming off a 2-10 season, will report for fall camp July 28 and begin practice the next day. The team will then depart Aug. 21 for its first matchup of the year, an Aug. 27 contest against Hawai’i.

Now that all the talking is over, it’s time for the Commodores to get to work.

“We understand we have that Week 0 game. We play one of the first games in college football. We have to get ready and get ready fast, but I think everybody knows that,” Wright said. “We’ve been on our Ps and Qs, we’ve been working extra, we’ve been in the film room every single day. The message is clear—we want to play at the highest level as a program and as a team. That’s our message, that’s our goal and that’s what we’re going to do.

“There’s a level of excitement in our program right now … everybody is ready to get out there and actually put some pads on.”