Mattos Puts Down the Mic

NASHVILLE, Tenn. — Some time ago there was a passionate Vanderbilt women’s basketball fan named Katie Hill.

She came to nearly all the Commodores’ home games and, because of her special needs, had a court side seat just to the left of Vanderbilt women’s basketball radio voice Charlie Mattos.

It just so happened that before one game, Hill’s daughter asked Mattos if it would be possible to rig up a pair of headphones to his broadcast so her mother could listen to the action. Mattos was all for it, but couldn’t understand why someone would want to listen to his call while being so close to the action.

It is moments like that one that stick out to Mattos who is making his 30th year of calling Vanderbilt women’s basketball his last. Vanderbilt’s 2 p.m. contest Sunday at Alabama will be his last regular-season game on the microphone. 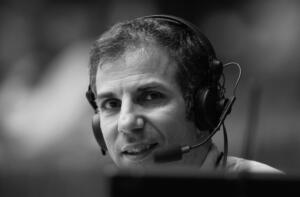 Mattos intends to remain with his full-time gig on the Coffee, Country and Cody show on WSM 650 AM. But the extensive travel and concentrated commitment to his play-by-play craft has run its course.

“I love it as much as I ever have. And I think I’ve probably better at it than I’ve ever been,” Mattos said. “But you need three of the same person to do what I need to do and I can barely do it with one. Something had to give.”

How Mattos got to this point is a bit serendipitous.

A native of Rhode Island and University of Miami graduate, Mattos, then working with WLAC 1510 AM, was approached in 1991 about a weekly radio show with Vanderbilt women’s basketball head coach Jim Foster. He had never met Foster or seen Vandy play, but agreed to the gig nonetheless.

One year later Vanderbilt was looking for someone to be the voice of the team on radio broadcasts. Picking Mattos was a no-brainer. On Dec. 1, 1992 in Tucson, Arizona, Mattos put on the headset and called a 73-63 Vanderbilt victory at Arizona.

There have been hundreds of wins and losses since. Championships and All-Americans. Coaches and student-athletes have come and gone. And Mattos actually thought the 2020-21 season may be his last when Vandy played just eight games due to the COVID-19 pandemic. 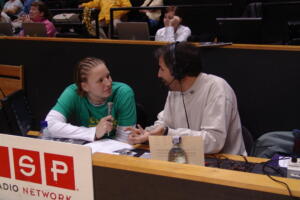 Vanderbilt, however, hired Shea Ralph to lead the program and Mattos watched as Tom Garrick, Ashley Earley and Christina Foggie signed up to return for another stint in Nashville.

I thought, ‘Well, damn, all my friends are coming back. I want to do this for at least one more year,’ ” Mattos laughed.

One of the biggest games in Vanderbilt basketball history occurred less than two months into Mattos’ tenure. The Commodores hosted Tennessee on Jan. 30, 1993, in what became a marquee matchup in the history of the Vandy program.

And as important as that game was to the history of the Commodores’ program, Mattos points out that the opponent wound up winning that matchup. So It was a game earlier that month that Mattos will always remember as being one of the best he got to call.

“We did a campaign with Jim Dandy Market. We put little brochures for free tickets in all those stores around middle Tennessee that we were playing Ohio State. We were both in the top 10 and (Ohio State forward) Katie Smith is an All-American.

“We get over 13,000 people in Memorial Gym. And it’s a great game. Shelley Jarrard hits a 3-pointer with about two seconds to go and we win and the place is going crazy and it was the best advertisement for Vanderbilt women’s basketball that you could possibly get because you instantly made 13,000 fans.

“What they saw was undeniably exciting. The crowds the rest of the year picked up”

Mattos hopes to be on the air next week when Vanderbilt begins play in the SEC Tournament at Bridgestone Arena, pending any schedule conflicts. Before then he’ll flick the on-air switch at least one more time and began the broadcast like he has every time before then.