Looking to Conquer the Lanes in Lansing

NASHVILLE, Tenn. — Vanderbilt will begin its NCAA Tournament run this weekend and will compete with Alabama State, Arkansas State and Youngstown State for a berth to the NCAA Final Four.

Competition takes place at the Royal Scot Bowl on Friday and Saturday at the Lansing Regional in Lansing, Michigan.

Vanderbilt, the top-seed at the regional and No. 3 seed overall, plays Southwestern Athletic Conference champion Alabama State while Southland foes Arkansas State and Youngstown face off. Both mega-matches are scheduled to begin at 8 a.m. CT Friday.

Vanderbilt will stream each match on the Vanderbilt Athletics YouTube page.

The NCAA Tournament field was expanded from eight to 16 and the format changed several years ago, but the Commodores have remained among the final four teams eight times in 16 tourney trips. Of those eight, Vandy finished as NCAA runner-up three times (2011, 2013 and 2019)  and won the championship twice, in 2007 and 2018.

The Commodores are 12-4 versus the Lansing Regional teams this season, sporting a 5-2 mark against Arkansas State, 6-2 against Youngstown and 1-0 against Alabama State.

Mabel Cummins has been at or near the top of every bowling age group she’s ever been in, yet she somehow seems a bit undervalued nationally when discussions turn to, “who’s the best?”

Paige Peters was recently named the Southland Newcomer of the Year. She took over anchor duties midway through the season and established herself as one of  the NCAA’s top spare shooters.

Caroline Thesier has quietly found her way onto the NCAA’s top 15 charts in many spare conversion categories, as high as fifth in makeable spare percentage.

The lead dogs are important, but in virtually every major tournament victory or deep run over the years, Vanderbilt has found someone else that catches fire in the moment. The Commodores will likely need such a heroine this weekend.

Angelique Dalesandro was medically cleared to bowl the day before the Southland tournament after missing six weeks with surgery on a broken left foot. She has returned to practice and will be ready for duty Friday.

The senior is regarded as one of the nation’s best “sixth men” for her ability to join a match cold and immediately produce quality scores.

Vanderbilt is scheduled travel to Michigan on Wednesday to get settled in before Thursday’s official practice and various administrative functions.

The four regional champions this weekend advance to the NCAA Championship on April 15-16 in Columbus, Ohio. 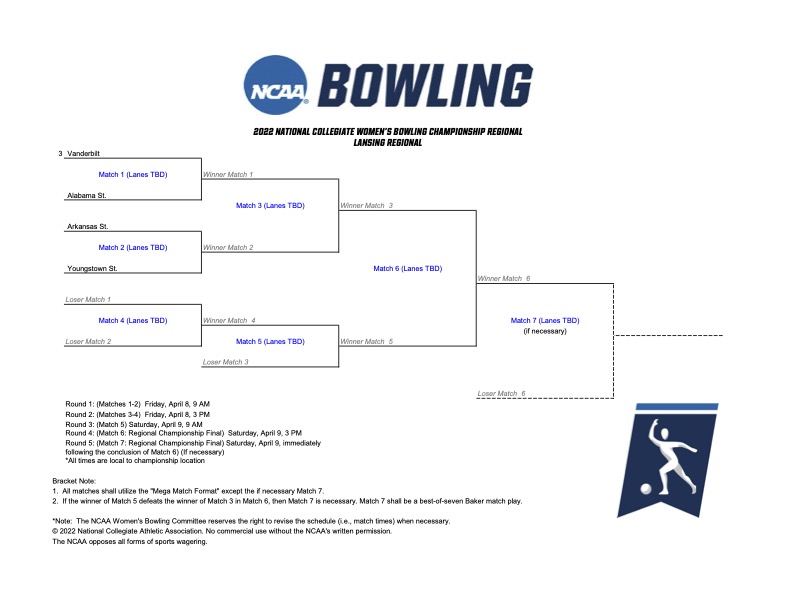