NASHVILLE, Tenn. — One of the unique aspects inside the Vanderbilt linebackers group this preseason is the feature of brothers wearing the black and gold this preseason.

Kane Patterson, a fifth-year senior who transferred in to the program from Clemson, and his brother, true freshman Langston Patterson, have brought a dynamic for first-year linebackers coach Nick Lezynski that has been enjoyable to watch. 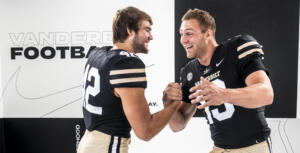 “We talk about the linebacker DNA that we want – tough, smart, competitive, finishers – those guys are starving for knowledge for football,” Lezynski said. “They’re harassing me in my office every day trying to get more as far as the install, as far as, ‘Hey coach can we watch this?’ They’re both wired the same way.

“I think it happened for maybe the first time last week where they were on the field together and I think we called a blitz because we knew the Patterson brothers were like battering rams. They’re going to hit home.”

The Pattersons, who each attended Christ Presbyterian Academy in Nashville, are competing for time with 2021 starters Anfernee Orji and Ethan Barr. The latter duo is coming off an impressive campaign that they both hope carries over into 2022.

Orji (92 tackles) and Barr (85 tackles) led the Commodores in stops one season ago. Barr also hauled in three interceptions while Orji made a team-high 13 tackles for loss. Orji has been held out of practice in recent days due to a minor injury, but the senior is expected to be available for the Aug. 27 opener at Hawai’i. 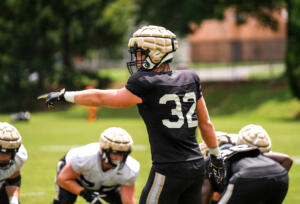 The four aforementioned linebackers, as well as sophomore Errington Truesdell, typically line up on the inside as part of Vanderbilt’s base defense. The traditional outside linebacker spot, meanwhile, can act as such or as a defensive end pending the down and distance.

Sophomore Miles Capers, for instance, has had a solid preseason fitting that role as a disruptive defender on the edge.

“It’s an awesome group to work with,” Lezynski said of his linebackers. “They’re experienced, we have some veteran guys at the top that have played a lot of football. Those guys are leading the pack from the top. And the younger guys are ready to roll. They’ve gotten a lot of reps and a lot of experience over the first couple weeks.

“We’re just trying to strengthen the team overall as a linebacker unit. So anything we can do to adhere to the message of coach (Clark) Lea’s mission and Vanderbilt’s mission, that’s what our aim is in this group.”