NASHVILLE, Tenn. — As Vanderbilt’s season continues to inch nearer, the team’s battle at the quarterback position has grown no less intense.

Four of the squad’s five QBs are vying this preseason to take over for departed starter Riley Neal. All four took snaps during Saturday’s scrimmage and all four will continue to jockey up and down the depth chart before Sept. 26 when the Commodores visit No. 13 Texas A&M. 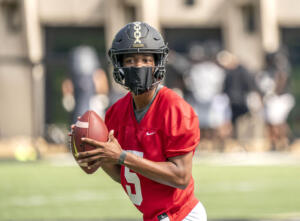 “All of them have positive attributes, obviously,” Vanderbilt offensive coordinator Todd Fitch said. “Now it’s about trying to develop consistency when they play – and really who can move the team? That’s all we’re worried about.

“There’s different ways to move the team and create first downs and scoring opportunities and that’s what we’ll look to evaluate as we move forward.”

Fitch, like the four quarterbacks competing for the starting gig, is beginning his first season on West End. The veteran coach directed an offense in 2019 at Louisiana Tech that finished in the top 40 nationally in scoring, total offense and passing offense.

Now in Season One at Vandy, two of Fitch’s signal callers are true freshmen and the other duo arrived from the junior college circuit. Ken Seals and Mike Wright are the two rookies and have continued to show promise while making expected, first-year errors. 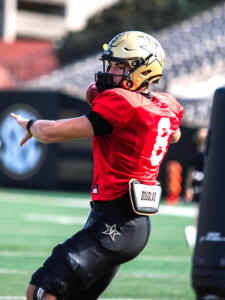 “Those guys are coming along,” Vanderbilt head coach Derek Mason said of Seals and Wright. “Every once in a while you see a freshman mistake – they don’t identify something or the protection or the alignment of the offense is off, but that’s just football. They’re growing every time they get out there.

“I thought those guys seemed poised when they were back there (during Saturday’s scrimmage). A couple times a ball was low, they were still able to gather themselves, keep their composure and still make plays. The game wasn’t too big for them.”

Danny Clark, who began his college career at Kentucky, and Jeremy Moussa, who started his journey at Hawaii, are the upperclassmen in the group. Moussa was limited after arriving in the spring with a minor injury while Clark was recently quarantined to guard against COVID-19 before returning to practice.

Fitch took some time Tuesday to break down each QB in the intriguing quartet:

• “Wright, every day he progresses. Natural ability, athletic, becoming more consistent as a thrower as we move along. The thing I love about him is he rarely makes the same mistake twice. He has the ability to take information, see a problem, try to correct the problem and move on – which is a great trait to have at any position, but especially quarterback.” 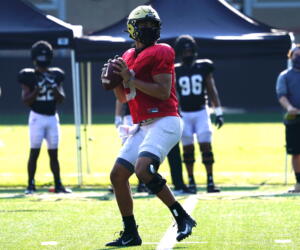 • “Clark has really good arm talent, able to make pretty much any throw you want. He’s older guy, has maturity, has a little moxie to him. He has a little bit of personality that I think the offense needs and wants.”

• “Moussa is one of the more talented guys in the room. You sit down and you can have a football conversation with him. He asks good questions. Has good arm talent also.”

While Mason and Fitch will likely know internally who will start the season under center Sept. 26, Vandy fans – and the Aggies of Texas A&M – will likely have to wait until the first offensive series of 2020 to see who is QB1 for the Commodores.

Whomever it is will be expected to perform at a high level right from the outset.

Said Mason: “You got to feel the presence of the quarterback. That’s got to be the energy bus for you when you step on the field. The guy that plays under center has got to be the guy who is the catalyst.”