NASHVILLE, Tenn. — The Vanderbilt football team held its first scrimmage of the spring Saturday, a two-hour workout inside Vanderbilt Stadium.

The Commodores are now through two weeks of spring practice as they continue to build the foundation for Team 2 under head coach Clark Lea.

“We’ve come a long way. That’s to be expected. I would say if we hadn’t, then something is wrong in our design,” Lea said. “We’re having fun. I think fun is based off the relationships that you build and the people that you’re familiar with now. Success in this program is going to start with our care for each other. I feel like we’ve established that and now we’re learning to love the game of football.

“These guys are putting a lot of time and effort into this and that is what is fueling their progress, both the inter-personal connection and then time invested around ball with coaches that care about them and are working alongside them. That’s been the hallmark of our progress and we just have to keep it going. We’re early in on this Team 2 and we have a long way to go and we won’t guarantee that the success will be linear, either. We got some adversity to fight through as well and we’ll take it as it comes.”

Mike Wright started the first offensive series at quarterback for Saturday’s scrimmage and he converted two fourth-down passes to tight end Ben Bresnahan. That drive stalled at the 20 when Wright was sacked by Malik Langham.

Joseph Bulovas kicked a 47-yard field goal from there.

The next offensive drive was orchestrated by quarterback Ken Seals. That series ended when Seals was sacked by Steven Sannieniola. 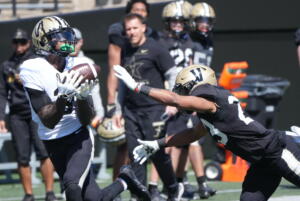 Vandy’s first touchdown came when Wright found Will Sheppard for a 23-yard strike on a slant route.

Will Faris made a 23-yard field goal on the next offensive series, a drive led by quarterback AJ Swann that featured a long pass completion to Quincy Skinner.

Vandy moved inside the red zone for the final portion of the practice and got a 1-yard touchdown run from Patrick Smith.

Saturday’s scrimmage ended when a bad snap inside the five going in was scooped up by linebacker Daniel Gaw. The sophomore picked up the loose ball and ran 77 yards the other direction for a touchdown. 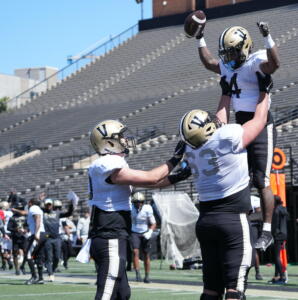 “Just cleaning up the operation,” Lea said on what he saw out of the offense. “That’s been a focus that coach (Joey) Lynch has had all spring. I think we saw playmakers step up, too. We have enough, we just have to keep getting in sync and keep getting in chemistry, but I also want to say the defense counter-punched today and did some good things.

“I thought the effort on defense was improved. That’s been our focus and now it’s about sustaining that effort over four quarters. That takes time and training. Was pleased with both sides. I think there’s going to be a lot to correct on the film. I think for the first scrimmage of the spring I thought there was a good back-and-forth. A good sign of progress is having the ability to go back-and-forth some.”

The Vanderbilt football program will welcome professional scouts to campus Monday for its annual pro day.

Wide receivers Tyrell Alexander and Chris Pierce and defensive back Allan George will work out through a combine of drills and measurables in hopes of being considered for a position at the next level. Prospects from other college football programs will also be part of the event.

Workouts are scheduled to begin around noon.